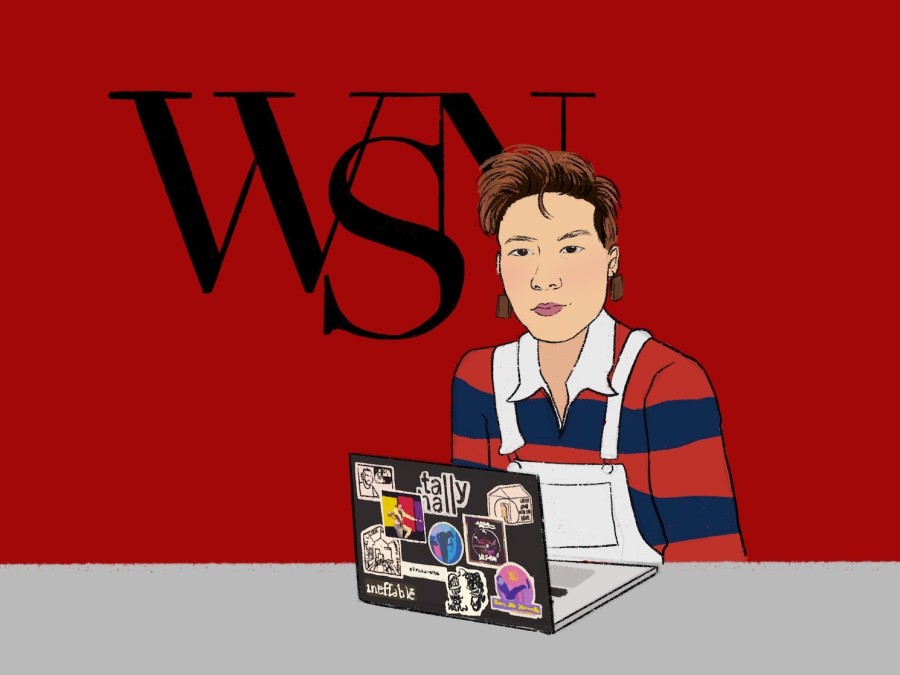 In February 2021, I sat in my childhood bedroom in Houston, Texas, trying very hard not to freak out.

It wasn’t because of the ongoing pandemic that had already claimed millions of lives, nor the disastrous winter storm that had wiped out water and electricity in most of Texas that week, though those things didn’t exactly help. It was because then-Editor-in-Chief Alexandria Johnson had just informed me that — after our very public mass resignation from the Washington Square News — Finley Muratova and Mands Montes, my former bosses, had decided not to return to the paper. This left me, the pre-resignation Under the Arch senior editor, as the single most viable candidate to lead Under the Arch.

I’d had one month’s worth of experience.

I’ve always been a writer. “Wherever life takes me, I’ll always depend on my words,” I had written in my college application essay. In grade school, English was always my best subject. I prided myself on my prodigious vocabulary and textbook-like memorization of grammar rules. I participated in the spelling bee every year — once, I even won second place. Words have always been easy for me.

What hasn’t always been easy for me is leadership. Anyone who has seen me attempt to make a simple executive decision can vouch for that. I buckle under pressure, balk in group scenarios and panic when faced with interpersonal conflicts. The idea of giving commands and expecting people to actually follow them was unfathomable.

When Alex Johnson asked what direction I saw UTA heading in that semester and what goals I had for the magazine, I couldn’t come up with a definitive answer. After our call ended, I reassured myself that, surely, somebody on staff would step up and save me from this responsibility. A week before production restarted, Vaishnavi Naidu, a pre-resignation UTA deputy editor, offered to co-manage with me. I felt a few ounces of the hulking weight lift off my back, and our reign as UTA co-managing editors began.

I now write this in my third and final semester in the position. I wish I could tell you I experienced a meteoric rise to success, but the reality was more akin to a haphazard, unwieldy stumble towards semi-competency.

Mistakes. I’ve made them. A feature that ran over 3,000 words — twice our usual word count — with language so abstract and complex that I simply gave up on cutting it down. A poem and accompanying art collection that I accidentally ran without the poem, upsetting the artist so much that she pulled her work from the piece entirely. Miscommunications. Oversights.

I knew the basics of UTA, but there were glaring blind spots in my understanding. I didn’t know that it had originally been created to focus on features and that creative writing had come later. I was unfamiliar with the magazines it was based on. Everyone on my staff was a brand-new hire, and I had no idea what to do with most of them. On the last night of production for While You Were Here 2021, Vaish and I both went to sleep before the PDF or landing page had been finished. Perhaps it should’ve been common sense that we needed to oversee the production of our special issue to the end. On the other hand, there was no precedent. We had never produced a special issue before.

I don’t know how much of that can be attributed to my total dearth of experience and how much to me simply being an idiot. At times, I was extremely frustrated that I’d been thrown in the deep end after only dipping my toes in the pool. Sure, I had a co-manager, but often it felt like I was dealing with the brunt of the work completely on my own. Yes, I had mentors, but there was only so much they could do after having already been separated from the paper for so long. And of course, there was the fact that everything was online because of the pandemic, making it nearly impossible to keep track of what was happening.

Pamela Jew, the founder of UTA and someone that I desperately hope considers me a worthy successor, wrote a Voices piece back in 2019 that mentioned her experience running UTA. I read it again at the beginning of this — my final semester — and was shocked at how uncannily relatable it was to my experiences, from treating my co-manager “more like a therapist than an editor” to watching my hires “dropping like flies” — a lot of them for the same reasons, even. But there was one line that stood out to me the most.

“We were determined to stay afloat.”

The resignation had thrown me in the deep end. My repeated failures were sacks of sand tied to my feet. But I was furiously thrashing and kicking, grabbing at anything and everything in a last-ditch effort to keep my head above the water — perhaps pulling a few people down with me in the process.

Vaish stepped down a week before the production of the Fall 2021 Arts Issue. For a couple weeks, I became the sole managing editor of Under the Arch. I relished the newfound freedom — I could make whatever decisions I wanted, whenever I wanted. I could fully embody the responsibilities without having to share the title. And of course, it meant I had full responsibility for all executive decisions. My leadership woes quickly returned.

I hadn’t expected Sydney Barragan to apply, but I was very glad she did. Like Vaish, she had been UTA deputy editor, and I hadn’t known what to do with her either. She was promoted in mid-November, right before Fringe production and a few weeks out from the Influentials issue — prime time for a major staffing change.

For her first meeting as co-managing editor, Sydney Zoomed in from a New Jersey train that she’d rushed onto that morning in order to return to Manhattan on time. I watched her jumping from train to Uber to foot, finally bursting into the office, clearly exhausted and suffering from a lost voice — and immediately getting to work.

Time and time again over the past semester, I’ve seen her dedication to the publication. From taking up the mantle in the first place, to staying late on special issue production day despite having a 6 a.m. train the next morning, to brimming with ideas for UTA’s future. From the moment she was promoted, she has been right alongside me, sacrificing time, energy, sleep and sanity for this little magazine.

I’ve stayed at UTA for as long as I have because I enjoy it, but also because, until now, I’ve been afraid to leave it in someone else’s hands. In April, near the end of my final semester, I missed a pitch meeting for the first time in my entire term as publishing editor, leaving Sydney to run UTA by herself for the day. I realized that, despite my control freak tendencies, I knew things would run just fine in my absence. When I returned to the office that day, I saw that I was right.

In a lot of ways, I’ve been drafting this eulogy since my first day of in-person Sunday production back in fall 2021. I remember finally stepping foot in the infamous Third North C3 office, meeting and hugging people whose faces I’d only seen on Zoom for the past year, basking in the glow of the glorious #EA422D red wall. Around noon, I stepped out of the office for lunch, feeling like I’d emerged from an underground chamber, and received a Slack message: “Where are you guys? Like, physically?” And in that moment, it was real.

There continue to be moments like that. Moments where I stand in the middle of the newsroom, between writers yelling across the table and brandishing papers and frantically tapping away at their keyboards, relishing in the absolute sensory-overload-mind-fuckery of Sunday production. Where I look to my left and see the editors I hired diligently revising articles, and I look to my right and see web editors I’ve just met designing a landing page for our special issue. Everyone pooling their talents together to bring a publication to life. Conversations about everything ranging from the best synonym to replace a word, to laughing at an email reply, to small talk about the best place to order dinner. During the rare moments when things quiet down, I can faintly hear whatever odd music someone has queued up on the community playlist. In those moments, I feel incredibly privileged to be part of this team.

WSN, and journalism by extension, have done far more for me than anything else I was involved in at NYU. It has helped me become a better writer, editor, collaborator and leader, discover a career path I am genuinely interested in, and make the bank-demolishing expenses of NYU a little bit more worth it. It was because of WSN that I chose to take on a minor in journalism. It was because of a review I wrote for WSN that I got to film an interview with my favorite musician, Will Wood. And it was because of my experience at UTA that landed me the editorial assistant job that I’ll be starting after I graduate.

I can’t describe all of my feelings about the UTA publishing editor role — it would take a whole other special issue. The satisfaction of seeing a first draft in its budding stages, riddled with odd word choices and incomplete ideas but brimming with potential, and helping it blossom. The stress of trying fruitlessly to make a difficult piece work, negotiating with writers, letting them down. The euphoria of reading through a shiny new special issue after weeks of frenzied emails and Slack back-and-forths, late-night hair-pulling and hair-splitting. The impending doom that inevitably returns with the next special issue. The excitement of seeing new faces at pitch meetings. The struggle to retain members and validate our place in the newspaper. Getting ignored over and over, having to push people again and again. Feeling inadequate, incompetent. Realizing I can make things happen. Ideas yelled fervently across the room, words scribbled in red marker on the conference room whiteboard, chicken-scratch galley printouts littered across the table. My face on the staff page, my name in a byline, my signature immortalized in an Issuu PDF.

From the moment I first joined WSN, I wanted to become more involved. I remember seeing inside jokes in the Slack channel and memes taped to the office walls and wishing I was privy to them. I grew up an only child, terribly socially awkward and too individualistic for my own good. Much of my life has centered around finding a community and a place where I belong.

Now, I can’t say that ambition was wholeheartedly fulfilled by WSN. This organization is far from perfect. I’ve seen that in my year and a half here. But I will say that working at WSN has added something to my life that my college years would not have felt complete without. I can say I fit right in, and I think my grammar-policing, spelling-bee-runner-up-placing, SAT-vocabulary-word-using younger self would agree.