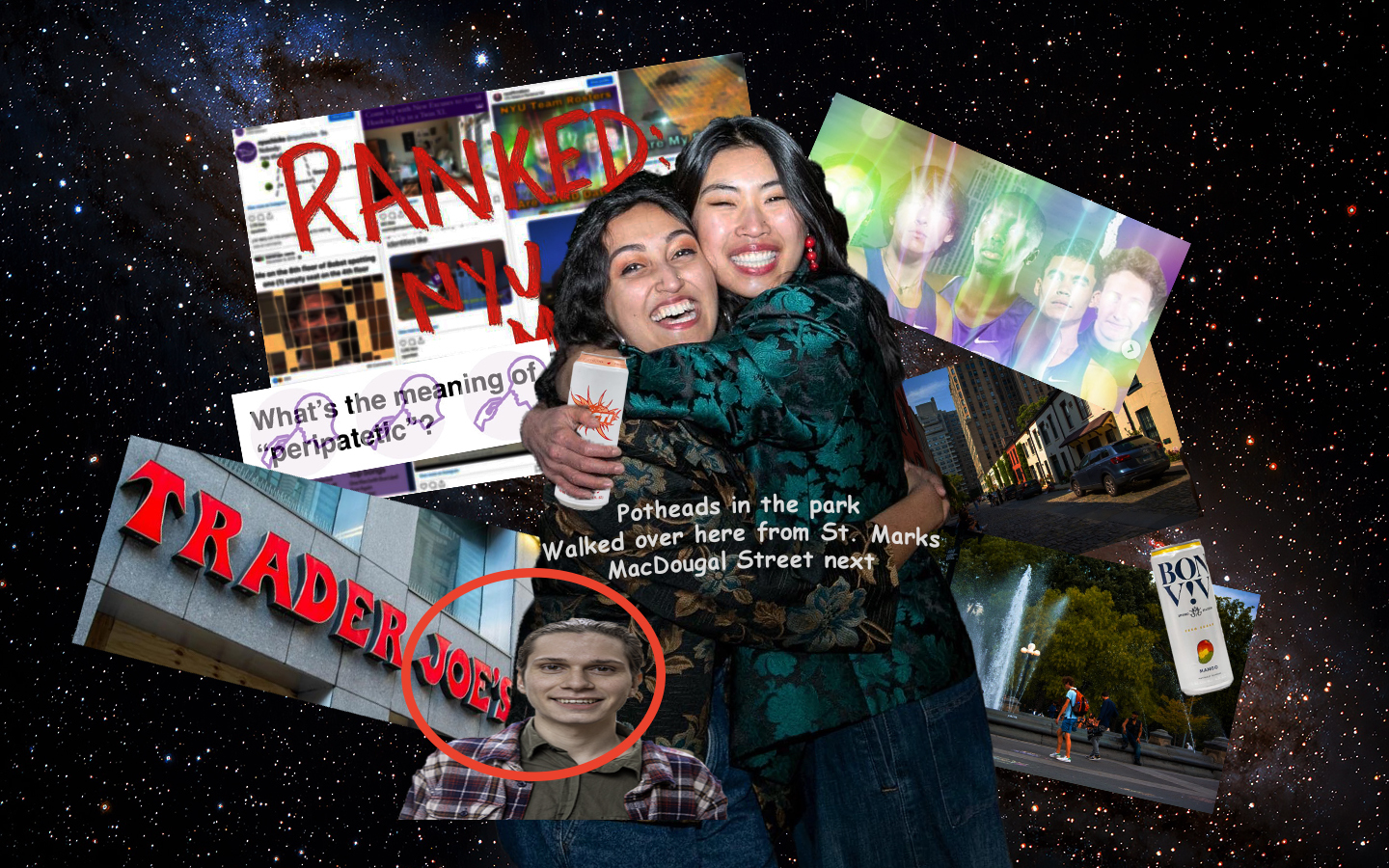 This one’s for the fans.

You knew this day would come. This is it. The final ranking. Here we go!

(Oh, and we brought in a special, not-impartial-but-a-little-less-partial third party.)

Joey:  🤐😔👎🚫❌🛑 Unfortunately, by that time in the semester, ​​we were running out of word juice. On the bright side, emojis have become so specific, we can have full conversations in them! Are we devolving or evolving?

Sabrina: I went back and confirmed that, yes, there are more words than emojis — just not by a margin that I’m proud of.

Trace: Not gonna lie, this article fucking pissed me off. I did not know Joey and Sabrina at the time except as the annoying writers who were using too many emojis and breaking every AP style rule known to humankind. To make matters worse, emoji don’t work in Adobe InDesign — the software where our creative directors lay out the e-print edition — meaning the print version of the article was practically naked and a real bitch to design.

J: “It’s fun to read if you have a favorite meme page / meme page that you follow” — this was my first draft of describing meme pages, until I read through it again and realized I really didn’t think that at all. Moral of the story: always read before you write your essays. Happy finals season guys — but we’re almost at the end of the school year! I thought the concept of memes was funny, but we had nothing to say. What was fun about it, though, was that we got to scroll through memes for hours and choose our favorites for the article.

S: When we came up with the idea to rank NYU meme accounts, I thought it would write itself because the memes in question are already comedy gold. But it didn’t write itself because I forgot we actually had to form opinions worth writing. There were some fun parts, though. I got to shamelessly promote my own meme (kind of like how I’m shamelessly promoting my own articles as we speak). I also learned that our copy chief Max Tiefer runs a hilarious meme page, and we convinced the Gallatin Concentration Generator to post again! Other than that, I didn’t have much to say then and I don’t have much to say now.

T: On the one hand, all the meme pages I follow are Deleuzian meme pages talking about bodies without organs, so it was fun to see what normal people find funny. On the other, NYU students are a bunch of organs without bodies, which is why we find a Gallatin Concentration Generator on Twitter so humorous.

J: This article stays close to my heart because it was the start of the Ranked series and my friendship with Sabrina, but not close enough that it ranked higher. It was very much a first article, you know? We were still getting the ball rolling — cool initial idea, average execution.

S: Joey and I showed up at the Culture desk last fall with no clue what was going on. What we did not have: prepared articles. What we did have: the same dream of ranking Manhattan Trader Joe’s locations. Our first time hanging out was going to the two Upper West Side Trader Joe’s(es). I remember making awkward small talk about our majors on the train ride from one to the other — the beginning of a beautiful friendship.

The less fun consequence of this article is that now, no one in my life will leave me alone about Trader Joe’s. My aunt got me a Trader Joe’s cookbook for Christmas. Thanks again, Aunt Anjana! My friends still send me Trader Joe’s TikToks. We even got quoted in a Mashed article about Manhattan Trader Joe’s — weird flex, I know. I appreciate the love, but please, let me stop talking about grocery stores. I have so much more to offer!!

T: To paraphrase one of the least worst presidents of the United States: Sept. 8, 2021 — a date which will live in infamy. This was the beginning of Ranked. There are very few iconic dynamic duos: Marx and Engels, Adorno and Horkheimer, Deleuze and Guatarri, Ben and Jerry, Batman and Spider-Man. But at the tippy-top of the list: Joey and Sabrina. Also, my bank account thanks y’all for introducing me to Trader Joe’s Wine Shop and making me a **** for Trader Giotto’s.

J: It was fun writing about hard seltzers, but I had an even better time working with the people that made this article happen: Sabrina, of course, Ryan Walker and Mitesh Shrestha for getting our drinks, and Manasa Gudavalli and the multi desk for these bomb-ass photos. This was when our friendship really kicked off, and I’m super grateful for them. Doesn’t the multimedia here pop off? Thank you thank you for the great work! We apologize for the ten thousandth time for asking for multi at the last minute — it’s just that sometimes articles don’t work out and we have to come up with a last-minute idea! Just kidding, love you guys (;

S: The number of targeted hard seltzer ads I’ve gotten on Instagram since publishing this article is hilarious, and being a self-declared seltzer expert makes me automatically liked at parties. Writing this article was funny because on most days, I would have relished sitting around sampling seltzers. Not the day we wrote that article. Joey and I were both dead tired and just wanted to get it over with so we could attend a 4 p.m. meeting hopefully not too buzzed. But it did end up being really fun, and it was the first time I hung out with Mitesh. Also, shoutout to Manasa for that beautiful web layout. It’s what the seltzers deserved.

T: I wish you would have shared.

J: I started to get emotional writing this piece, then realized that I’m not even graduating until January 2023. What the fuck. Let me take a step back.

S: The gallery of everyone’s DUMBO pictures was worth publishing a whole article. Not gonna lie, reminiscing about my first year at NYU made me feel a lot of Senior Feelings™ and put me dangerously close to using the “places to cry” list. What a way to go out.

T: The late 18th- and early 19th-century French writer Joseph Joubert journaled a lot about how you don’t finish a text, you end it when you stop writing. This is to say that the “well… anyways,” “omg, they’re just like us fr (‘:,” “that was fun,” “and that’s pretty cool,” “hope this helps” and so on are very profound. Because you don’t finish a list — you end it when you stop listing, which is why I didn’t believe y’all could make a list of quintessential NYU experiences. Because the quintessence is the fifth essence, the essence of the essences, the truth of our being-in-the-NYU-community. How do you conceptualize that in a form doomed to incompletion with a medium subject to dissemination? Idk if this makes sense, but that’s what I was getting at.

J: The moment Sabrina pitched this idea to me, I knew that it was always going to be in my top three favorite Ranked pieces we’d ever do. Sabrina had followed this Tumblr page on places to cry and we were both like yeah, this is the one thing everyone has in common at NYU and in New York City.

S: I knew this one was destined for greatness when we had a crowd of WSN editors hovering over us and arguing over the ranking before we had even finalized the list. I learned so much about my friends and where they cry that day.

T: The story about the menty b I had at Mood Ring after too much yay and neigh is NSFW, so suffice it to say that even if you’re too traumatized to cry like me, this article is more than a list of places you could or should cry. This is the essence of what it means to be an NYU student — to cry and then to make it a public fact and then to brag about it.

S: I can’t believe we peaked this early. To be fair, though, I think this was our best writing because the topic was so bland that it forced us to actually be funny. And it was really validating to know that other people misjudge the distance between Washington Square Park and Mercer.

Thank you to all of our loyal fans who picked fights over our rankings every time we published one. You’re the reason we got to live out our micro-influencer era. Most of these people worked with us or were our parents, but it still counts.