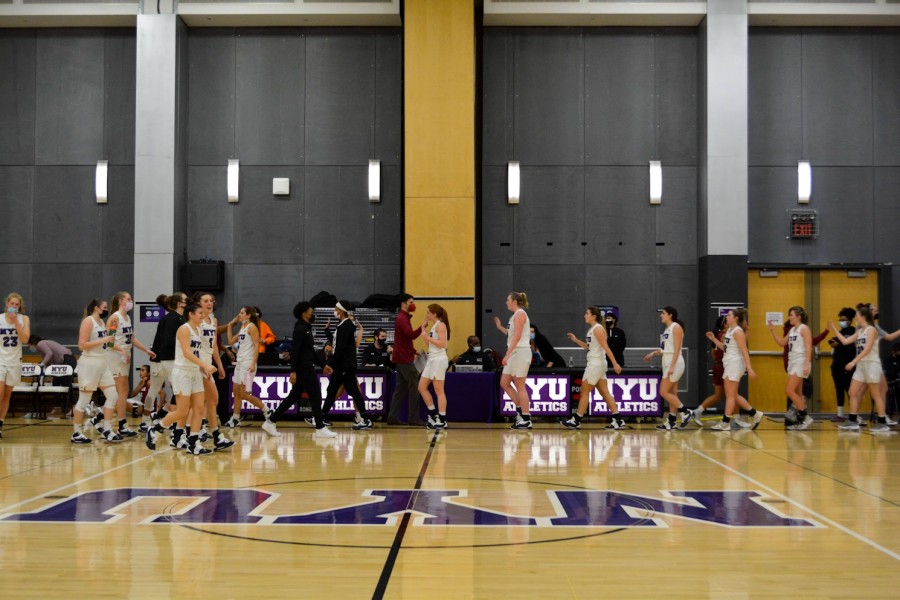 Graduating from school and from sports
Though NYU isn’t known for its athletics, being on sports teams has been transformative for these three seniors.
By Kiersten Dugan | UTA Portraits Editor

“We call it the sisterhood,” said NYU women’s basketball co-captain Meghan McLaughlin. “I’m gonna walk away with all these new sisters.”

McLaughlin and her co-captain, Bianca Notarainni, have spent the last four years making friends and learning the value of hard work throughout their time with NYU Athletics. NYU is not necessarily known for its athletics department, but we have 23 NCAA Division III varsity sports teams with 450 students participating every single year. Many of these students have upheld academic achievements while simultaneously competing in a collegiate sport, and 135 of our college athletes across nine different sports have been recognized for their academic achievements this past season.

Friendship is one of the many benefits of participating in university sports. NYU Athletics fosters tight-knit groups of students and offers them the opportunity to be a part of a competitive, ambitious atmosphere both off and on the court.

“I think NYU brings together a bunch of student athletes that are very dedicated to being successful, which is why we’re so competitive,” said Notarainni, a CAS senior. “We want to win, which was shown in our amazing season this year.”

NYU’s women’s basketball team just finished a historic season, taking home the best field-goal percentage in program history. This is also the sixth Elite Eight appearance ever for the program. Their season came to an end with the team winning the UAA title for the first time since 1997 and even advancing to Elite Eight of the NCAA Championship Tournament, where they ultimately lost to Hope College. Both Notarainni and McLaughlin played their final game with NYU on March 12.

This March, NYU’s baseball team began their first season since March 2020. Since then, they have proven themselves to be a strong team with an even stronger team morale. For NYU baseball catcher and SPS senior Grant Berman, one of the highlights of being on the team was the friends he made.

“One [memory] that stood out to me particularly was developing a relationship with my fellow senior Zane Baker,” Berman said. “We entered the program together and virtually have done everything on this team together through the ups and downs. Developing a bond like that is a testament to the culture we have created here.”

When it comes to athletics, practice is everything. According to the NCAA, college athletes dedicate an average of 30 hours a week to perfecting the game and preparing, both physically and mentally. Committing one’s time to both rigorous academics and competitive athletics teaches a sense of responsibility, time management and hard work.

Berman joined the team his first year at the bottom of the depth chart, the roster that shows the placements of starting and secondary players. With one semester of dedication and tenacity, he worked his way to the top.

“I found myself at the bottom of the depth chart in the fall, but as I worked and developed, come springtime I was our everyday catcher,” Berman said.

Notarainni credits being a student athlete for teaching her the value of perseverance.

“One of the biggest things that I’ve learned is hard work, you really have to work for everything,” Notarainni said. “It’s not just going to be handed to you. Which comes with just being at NYU — you have to work hard at just crossing the street.”

The friends made will never be forgotten, nor will the lessons learned. Hard work and common goals promote a unique environment of productivity and aspiration.

“I think that’s kind of like my biggest takeaway is that we’re all very dedicated women,” Notarainni said. ”It was great to find a group of women that were striving for the same goal.”

Berman credits his time on the baseball team for fostering his own personal growth and tenacity.

“Playing a sport, specifically baseball, has taught me more about myself and about life than any class or book has ever,” Berman said. “Playing a game of failure teaches you how to stay even with your emotions, to trust the work that you put in everyday, and that everyday is another chance to succeed despite the results the day before.”

The transition to postgraduate life is something every senior thinks about as they approach May. The college lifestyle of classes all day, the NYU Daily Screener, weekly games with your teammates and late nights in Bobst will come to an end. Notarainni will be continuing her education this fall with a Master’s in Public Health at Columbia University.

McLaughlin will be working with public relations firm Ruder Finn starting this summer.

“I’m going to be in the city without playing basketball,” McLaughlin said. “I think that’s going to be weird, especially because the whole team is going to be a couple blocks from me, but we’re just gonna have completely different lives — I’ll be at a nine to five, and they’ll be at practice.”

Berman, on the other hand, will be playing in the MLB Draft League after graduation in the hopes of continuing his baseball career.

“My lifestyle [after graduation] will stay the same yet with more time. I plan on prioritizing loved ones that sacrificed a lot to allow me to play the sport I love,” Berman said.

Only 2% of NCAA student-athletes pursue a professional athletic career. That leaves the other 98% facing a huge shift in their daily routines. The shift from consistently working out with teammates and juggling classes in between practice and games to working full time or pursuing further education is bound to leave athletes feeling like something is missing. Luckily, the three athletes mentioned in this article spoke with confidence and certainty about their future endeavors and routine after graduation.

McLaughlin will conclude her collegiate athletic career come graduation, but plans to keep basketball in her life.

“I think it’ll be good because I plan to do women’s leagues and stuff like that,” McLaughlin said. “So I don’t think basketball will ever be too far away.”

The NYU community will watch as our athletes take their hard work, determination and resilience with them as they continue on their journeys. The last game, the last play and the last moments of being a team will surely stick with them forever.

“I would say it’s one of the best and hardest years of your life,” said McLaughlin. “I’m so happy I went to NYU, I wouldn’t change my college experience for anything.”