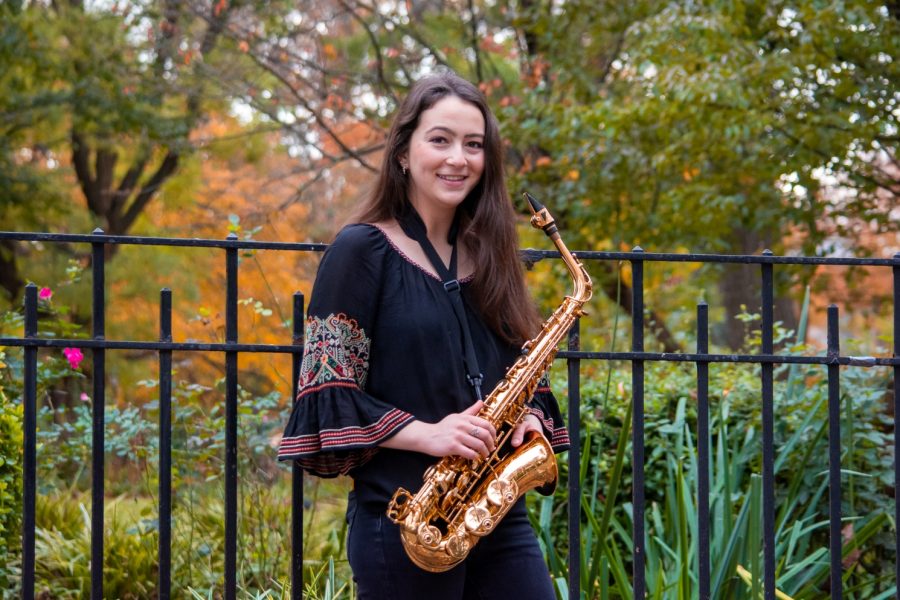 Key of She is redefining gender in jazz

Founded by NYU jazz performance student Olivia Hughart, Key of She is an expansive organization fostering a supportive community for girls in jazz — and it’s only just getting started.

Even in its infancy, jazz was not a genre that stuck to the status quo. Developed by Black Americans in the early 20th century, jazz was marked by its amorphousness, as musicians riffed on an amalgam of influences to collaborate live with fellow band members. In short, jazz presented a sonic anomaly: It created new precedents for American music and performance. Now, nearly a century after the genre’s inception, student-run organization Key of She asks: Why should jazz’s rebellion stop when it comes to gender?

Founded in 2012 by saxophonist Olivia Hughart — who is currently a Steinhardt junior — in Philadelphia when she was just 12 years old, Key of She is a nonprofit organization that encourages and supports gender equity in jazz through the curation of free digital resources, live events and communities of female musicians.

“It was definitely something that I saw was needed,” Hughart said. “I would just go to big jazz festivals and be like, ‘Wow, that band only has two girls in it. That’s so lame! Where are all the girls?’”

Hughart’s impassioned frustration speaks to a wider pattern in the jazz community. Though jazz is a medium that’s inherently collaborative, historically, the genre has largely excluded players who aren’t cisgender males.

From elementary school teachers pushing young girls toward stereotypically feminine high-voiced instruments, to jazz studies professors relegating “women in jazz” to a single lecture, and even collegiate jazz programs overwhelmingly comprising men, the lack of women in jazz is an accepted cultural standard.

Emily Davies, a bassist and NYU jazz studies graduate student, is a frequent participant in Key of She’s digital events. She also noted this marked exclusion of female musicians from her own jazz education.

“You hear a lot about the singers: your Ella Fitzgeralds, your Billie Holidays,” Davies said. “But you don’t hear so much about the women who played the side instruments, and there’s a whole wealth of history there.”

Seeing this lack of community for aspiring female musicians, Hughart was determined early on to make a difference. With the help of a couple friends and a supportive band instructor, Key of She was born. Starting out as a grassroots organization, Hughart gathered 12 girls from her school district to form a brigade of tweenage players who specialized in traditional jazz instruments from the trumpet to the vibraphone.

“We would just play music and hang out together in the mornings and bond over the love of jazz together,” said Hughart. “It became a very supportive space that everyone looked forward to every morning.”

Running with this momentum and a hunger to expand, Hughart began waving flyers and sending follow-up emails after jazz festivals. There, she began connecting with local high school band leaders and musicians. Key of She rapidly gained more members, eventually morphing into an even bigger group.

The organization’s reach became so expansive that in Hughart’s senior year, Key of She was able to hold a jazz conference in 2019 with a flurry of panels, masterclasses and live concerts by prominent female jazz musicians at The University of the Arts in Philadelphia.

“It was really the moment that a little underground girl’s jazz club became a full-fledged organization,” Hughart said. “It was pretty amazing to see.”

There were over 200 attendees, connecting female jazz players from the greater Philadelphia area. The event was not only a huge success among the attendees, but also revealed an expansive, passionate community of people who weren’t getting the visibility they needed.

“We had overwhelmingly positive feedback,” Hughart said. “Girls, parents, educators, guys who wanted to come and show their support, and lovers of jazz who wanted to just be there for the music. But once everyone got in that room, they realized how important the mission actually was.”

Amy Hughart, Hughart’s mother and the managing director of Key of She, has seen firsthand how important Key of She can be to parents and their daughters.

“It’s just not an experience that you find anywhere, it’s something that we found to be unique,” Amy Hughart said. “We had a dad approach us and say: ‘This support you’re creating … I’m so glad you’re doing this because my daughter has been the literal only one in her jazz class forever’… There was just this fire in his eyes.”

Large-scale events like the conference prove that, in order to diversify the jazz landscape, community is key. The students, parents, mentors and musicians who became part of Key of She’s collective network can see that art should never be done in a vacuum. The lively energy of being in a room with like-minded, supportive individuals can make people feel less stranded — and the music even stronger.

This connection grows even stronger when unlikely communities of musicians can interact, such as student musicians and established professional jazz artists. Davies said this was one of the most memorable aspects of her experiences with Key of She, as she found meeting people like international performer and professional jazz saxophonist Claire Daly in this context to be both far more intimate and beneficial.

“[Daly] didn’t come in like, ‘Look at me! I’m this acclaimed saxophone player,’” Davies said. “It was: ‘Look at me, I’m a human … I was where you were however many years ago, I was in your shoes and this is what was important in the path that I took’ … It really helps to hear that from another woman.”

Unfortunately, when the pandemic struck, the ability to facilitate this community was ripped out from under Key of She. The conference that was planned to be annual was suddenly inaugural, and so — in the way that only jazz musicians know how — Key of She had to improvise.

Instead of relying on the conventional group jam session, conference or live show, the organization began devoting time to curating digital events, such as their Zoom concert series, and resources, such as a database of more than 500 prominent women in jazz, which can be found on their website. This transition shows that artistic communities can actually benefit from crossing into the digital sphere. The organization’s efforts have continued even as pandemic restrictions have been lifted.

“We’re hosting our fourth virtual event at the end of the month,” Hughart said. “That’s allowed us to not only just connect with people in the Philadelphia area but [go] nationwide and global … we even have some loyal followers in India who wake up at 2 a.m. to come to our sessions, and some girls in London — really all over the place.”

Although this global community was fostered in a turbulent context, for Key of She, it wasn’t incidental. Instead, it speaks to how the organization’s efforts are not just a localized phenomenon. When the scope of jazz’s inequalities are properly acknowledged, networks like these can transcend barriers in unexpected ways.

As the Key of She team looks toward the future, the ability to sustain this crowd-sourced support system will remain essential. This includes getting back in the swing of live events as soon as possible, which many members of Key of She are highly anticipating.

“I think being in person and having that community and sitting at a table where they can talk and share a meal — and there might be jam sessions where musicians can come over and play with them —  that’s where the importance lies, in that crossover,” Davies said. “As a musician, I just want to meet up with people in person. I want to travel and bring out my bass and play with these people.”

Key of She is also working on acquiring nonprofit status; currently, Philadelphia’s Settlement Music School is their charitable fiscal sponsor. Key of She could then both retain and grow its ever-expanding network — and even inspire other communities to begin jazz collectives of their own.

“The more, the merrier, really,” Hughart said. “Once we started this band, this program, the ensemble, more girls were seeing themselves in the spotlight and not having to worry about what other people think of them because we created this supportive space. Now there’s people seeing that this is a resource that is needed, so I’m seeing more similar collectives and organizations and clubs starting to form.”

Davies also noted a similar shift within her own musical community.

“There were never a lot of women not playing flute or clarinet, and occasionally you see female trumpet players and occasional saxophone players,” she said. “But from my viewpoint, that’s not as much of an issue anymore; there’s a lot of female players in jazz, popular music and even orchestras.”

These tangible impacts evoke a fairly appropriate cliche: Representation matters. When a person sees a path to success reflected in the people around them, a radical paradigm shift can occur. For an art form rooted in rebelling to survive, jazz is a medium that deserves to be accessible, equitable, supportive and a pleasure to all those who have a passion for mastering its craft.

As both a community organizer and a musician, this idea comes naturally to Hughart.

“Seeing awesome women in jazz just makes me want to play even more, and when I first saw that for myself, I knew it would be true for others,” Hughart said. “And it is, because they’ve told me firsthand that it really helps not to be the only person in a room where you’re the only girl … There’s no underlying stress, besides just the music being played.”

Key of She exemplifies the benefits that being a part of a collective can provide in uncertain times. Collaboration and connectivity are the last vestiges of normalcy that anyone in this particular cultural moment can understand, especially for artists accustomed to creating in a group.

Organizations like Key of She, though transgressive, aren’t necessarily about reinvention, but rather revelation. They reveal existing, vibrant communities and the incredible artistic output that comes from them when given the structural support that they require.

Key of She has upcoming digital events on March 14, 15 and 16. Future endeavors can be tracked on their Instagram @keyofshejazz or their website, keyofshejazz.org.