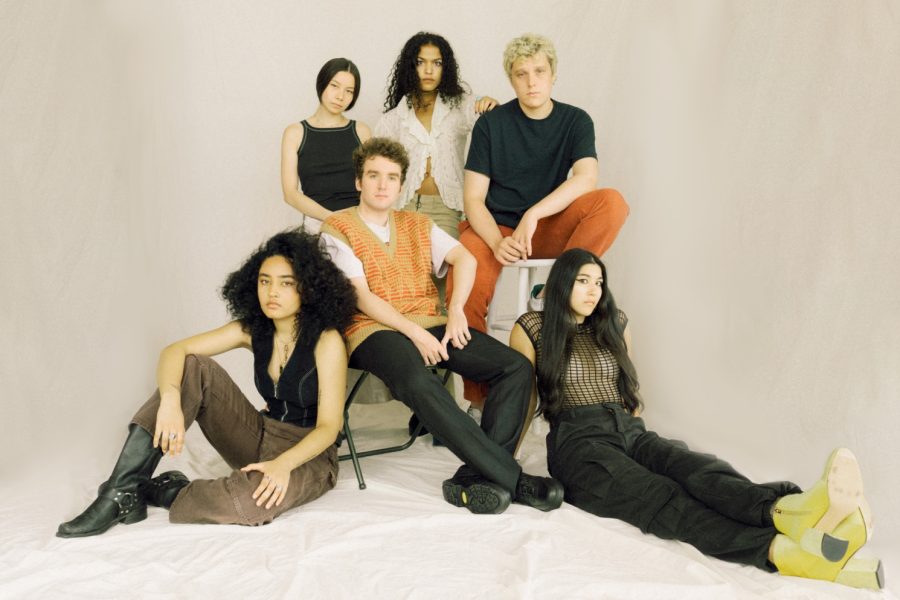 MICHELLE is a creative powerhouse

The New York City-based collective may be known for their music, but they’re just as skilled in the art and dance departments.

“Kick-ass bangers.” In three words, that’s how Julian Kaufman of New York City-based band MICHELLE would describe their music, which blurs the lines between pop, R&B, funk and everything in between. In paying tribute to their hometown and the way it’s shaped their lives, MICHELLE skips across various sonic palettes to produce two glittering albums — “HEATWAVE” and “AFTER DINNER WE TALK DREAMS” — the latter of which was released on March 4.

New York City runs in MICHELLE’s veins. The members — Sofia D’Angelo, Julian Kaufman, Charlie Kilgore, Layla Ku, Emma Lee and Jamee Lockard — are native New Yorkers who all “took [their] first steps” in the city, as D’Angelo put it. The whole group contributes to the songwriting process, acting as a collective, with Kaufman and Kilgore focusing on the programming while D’Angelo, Ku, Lee and Lockard sing.

Arguably, MICHELLE wouldn’t even be MICHELLE without New York. The group first got together to record “HEATWAVE,” an album about growing up in the city. Having met through mutual friends in high school, Kaufman and Kilgore reached out to singer-songwriters they knew through the New York teen music scene, recruiting D’Angelo, Lee, Lockard and Ku for the project. Thus, MICHELLE was formed, even if the group didn’t know until later quite what that meant.

“Being the singer-songwriters, [we] went in on different days to write and record our songs,” Lockard said. “So we actually weren’t all together for the first time until our first concert at Bard College, which was a couple months after the album [‘HEATWAVE’] had already come out.”

The city also inspired MICHELLE’s goals as a collective, which originally bloomed from the group’s shared love of all things music, art and New York.

“That kind of shared love for music and art and our city really guided us through our first record and continued to guide us through the making of ‘AFTER DINNER WE TALK DREAMS,’” D’Angelo said.

I was curious as to how MICHELLE’s mission had evolved since “HEATWAVE,” but D’Angelo beat me to the question.

“I think now the mission is just seeing how far we can go with this and how we can explore our creativity in new ways, with all these new resources that we now have access to and all the lessons that we’ve learned — from making ‘HEATWAVE’ in two weeks to ‘AFTER DINNER WE TALK DREAMS’ in two, three years; [from] making music videos with full crews to music videos with no crew at all,” she said.

The group defines themselves as a collective because of how much they do by themselves — from merchandise to artwork — demonstrating that MICHELLE is more than just a music project.

“The sweater that Jamee’s wearing right now, Layla designed,” D’Angelo said, adding that Lee designs all of the collective’s artwork, including their latest album cover. “The fact we get to explore all of our artistic love in this one entity is really special.”

The group’s creativity and progress is no better exemplified than in their latest single, “POSE.”

Over a pulsating, kick-heavy beat and ’70s-inspired synths, MICHELLE sings, “Pose one, pose two, pose next to me.” The song is the perfect dance track. It’s hard to imagine it being anything else, though it apparently started out slower. When Kaufman and Kilgore received feedback that “POSE” had potential for a dance song, they upped the production ante.

“We turned up the tempo and we changed the kick pattern to be more of a constant pulse,” Kaufman said.

He added that they became wary of overproducing the track.

“When someone tells you a song has a lot of promise, when someone tells you a song’s going to be big — and who knows whether it will be — it’s so easy when that stuff happens to get in your head and start thinking you have to produce this pop-with-a-capital-P-song,” Kaufman said. “When you do realize you have something good, turn off those blinders and just really try to look at it plainly. Make sure it’s minimal, it’s strong and it’s emotive.”

Tracing various subway journeys, the accompanying music video to “POSE” is delightfully playful, though not for the claustrophobic. Choreographed by the group’s own Lee, you’ll watch MICHELLE hold their balance on the 7 train, glide up and down escalators, and leave behind a mysterious green bag on the subway seat. Apart from being physically and aesthetically compelling, I’m impressed by the group’s dedication — they must have spent hours in the subway, which is no easy feat. After watching the video, I had to know what MICHELLE’s favorite subway lines were.

Coming out of left field — “I know it’s going to be a big take” — Kaufman’s was the G train. Having moved to Brooklyn in July 2021, he quickly learned of the borough’s public transportation inadequacies.

“North Brooklyn and South Brooklyn were not as connected as I thought they were,” he said. “So when I learned that the G train could take me from basically Bushwick to Carroll Gardens, or even Sunset Park, I was like, ‘Wow, I really like the G train.’”

Lockard opted for the Q, since her family home is uptown.

The BDFM lines found a fan in D’Angelo. “The orange line speaks to me,” she said. “It stops in all the coolest places, except for Herald Square.”

“I enjoy anything that goes over the bridge,” she said. “I don’t think that ever gets old.”

A Clive Davis Institute alum, D’Angelo must have enjoyed commuting to the Institute’s new downtown Brooklyn location, which is on the F line. Knowing she graduated from NYU in December 2020, I asked her what she would say to her freshman self.

The answer was blunt.

“Use the fucking studios,” D’Angelo said. “Before Clive, I went to an all-girls school [from] kindergarten through 12th grade and I was the rogue, creative, artistic person. I’d spend my free periods in the music room playing piano and singing or writing songs [and] during music class I’d be on GarageBand … So I was kind of a big fish in a small pond over there.”

D’Angelo explained that when she got to Clive, she felt the reverse — that she was a small fish in a big pond. Nevertheless, she loved the education she got there, citing that she’s still in touch with a few of her professors. Her one regret?

“I just wish that I didn’t psych myself out because of all the producer bros who would just go to the studio and do whatever,” D’Angelo said. “You’re supposed to make noise and that’s OK — that’s what you’re meant to do — you don’t have to ask for permission.”

On “AFTER DINNER WE TALK DREAMS,” D’Angelo — and MICHELLE as a whole — are certainly not asking for permission. Where “HEATWAVE” was about adolescence in New York, “AFTER DINNER WE TALK DREAMS” dwells on the transition period — that strange, slightly disorienting limbo between being a teenager and a young adult. Lockard summarized the album as being “‘HEATWAVE’ all grown up.”

“The [new] album feels full circle,” she said. “‘MESS YOU MADE’ is about the struggles at home, and then you kind of go on a journey with us of becoming a young adult, and then ‘MY FRIENDS’ is all about those young adult friendships that you have.”

As college students, those young adult friendships are all too familiar. Just from its title, “AFTER DINNER WE TALK DREAMS” resonates easily with the college crowd despite MICHELLE no longer being in college.

Given the album’s title, I asked if the group had any dream collaborations in mind.

“I have a fantasy that one day Odd Future reassembles and then we collab with them, because I think it would be the most unhinged, whimsical project to ever exist,” Ku said. “There would be so many people in the room; it would be utter fucking chaos. But I think it would be a really beautiful thing.”

“[I’d love to spend] two months with him at a studio, with him actually engineering for us … with a bunch of instruments set up at all times,” Kaufman said. “Working with an engineer on the way in would be quite a pleasure for me.”

“Our music exists in similar ecosystems,” she said.

Wolf wouldn’t be the first big-name on-the-rise artist MICHELLE has collaborated with. As labelmates, the collective recorded a song with Arlo Parks before opening for her on her fall 2021 tour. Now, MICHELLE is gearing up for touring with Mitski.

While Lockard is most excited to play Radio City Music Hall on the tour, D’Angelo is looking forward to something more relatable.

“Hopefully [we get] our rider fulfilled every night, since these are pretty big venues,” she said. “If we can get that, then we’ll be set for breakfast and snacks. Because it’s really important to eat nourishing foods on the road.”

D’Angelo also shared that she was excited to travel again, although maybe not to Denver, where MICHELLE will meet Mitski.

“I’m also hoping for a better experience in Denver,” she admitted. “I didn’t really love [it] the last time we went there. The altitude, the altitude, can’t change that.”

Though it’s certain you won’t find D’Angelo on the Colorado slopes, you can catch MICHELLE opening for Mitski starting March 12.

MICHELLE’s new album “AFTER DINNER WE TALK DREAMS” is available on all streaming platforms.