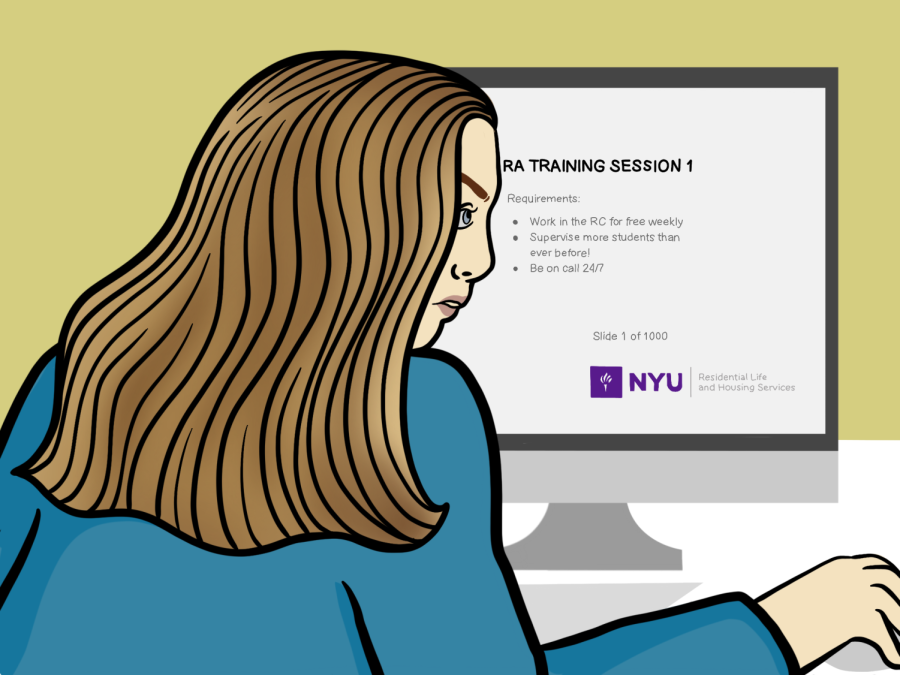 Working as a resident assistant at NYU means navigating a minefield.

When I applied to NYU, I knew I would be paying most of my tuition. I don’t come from a family that could afford a robust college savings account. My parents help me when they can, but my $250,000 in student loans does most of the heavy lifting. I knew from the start that I would need to work as a resident assistant to help cover the costs. When NYU moved all classes online in response to COVID-19, the only way my parents were letting me leave home — and the only way I was making it through the rest of the pandemic — was with the free housing and meal plan that comes with being an RA.

What I didn’t expect to come with being an RA was multiple encounters with the New York City Police Department, dismissive responses from our Building Leadership Team about our concerns, and the free office labor that would be expected of me.

It is financial circumstances, desperation and the deceptive appeal of RA benefits that lead people to become RAs — the reasons I found myself in an interview the fall of my sophomore year. The Resident Assistant Leadership Institute is a lengthy two-round interview process that potential RAs go through. The other applicants and I sat in a stale Palladium conference room at 9 a.m. on a Saturday morning as the RALI staff told us that only about 100 of the 800 students who applied to be an RA would be hired.

The threat of being easily replaced was made clear from the start. We were told stories about students who applied because they were commuting from as far as Philadelphia and about students who would have to unenroll if they didn’t get financial help. This type of desperation was presented as a driving reason behind the position’s competitiveness.

NYU’s Office of Residential Life and Housing Services describes the RA as “a paraprofessional who lives in an undergraduate or graduate residence hall” — as a “leader” and “resource for the residents in the community.” As an RA, I was expected to implement programming and respond to students’ concerns in exchange for housing and an NYU meal plan, effectively taking around $12,000 off of my tuition bill. It sounded like a good deal. I was offered the role in spring 2020 and moved into Lafayette Hall that fall.

The first couple of months were rocky, as was the nature of pandemic dorm life. It was hard to engage residents in programs, and I felt disconnected from the other RAs on my team as I hadn’t met most of them in person. It was impossible to overlook the lack of support for RAs from our BLT.

The biggest concerns came with several instances of police activity in the building in March 2021. We expressed these concerns to our resident hall director and assistant director, telling them that we were scared as were our residents. The dorm felt violated, and the RAs’ worries were met with a series of “I hear you”s followed by no action at all.

Audrey Becker ’21 was on duty when the police arrived the night of March 19, 2021 — an overwhelming situation on its own. The aftermath, Becker said, was worse. The campus safety officers didn’t have a clear picture of where exactly the police were in the building.

“They kept telling me the wrong floor and they weren’t telling me what the police were doing, what they were looking for,” Becker said. “The story kept changing.”

We later learned that the police were responding to a call about a possible suicide attempt. A passerby had apparently seen a resident smoking on their balcony and made the call, but they didn’t know exactly what floor, so the police checked all floors from 11 and up. They knocked on every door and insisted on searching every room. Residents were ambushed, and RAs couldn’t even tell them what was going on. When Becker and the other RAs on duty called the residence hall director, he told them they could handle it and to call if they needed help. But that’s what they were doing — calling for help.

“It was so poorly handled to begin with,” Becker said. “The aftereffects with the residents and the student body was just awful and I had a lot of residents who were very, very upset. How am I supposed to help them? I’m a student just like them. I’m not an activist or a mental health professional. I was already shouldering enough and then I was having to have these deep, heavy conversations with half of my residents and it was so overwhelming.”

In an attempt to hear our concerns, the Lafayette BLT dedicated one of our bi-weekly team Zoom meetings to a conversation between all of us and Shanelle Pendergrass, NYU Campus Safety’s director of support services. I and other Lafayette RAs expressed frustration regarding the lack of information provided to us and our residents during and after the incident, the lack of support offered to both students and RAs, and the lack of assurance that this wouldn’t happen again. In response, we got more of the same “I hear yous” from both Pendergrass and our BLT. As we told them we and our residents felt unsafe, our RHD told us the police were here to keep us safe and were “just doing their jobs.” I didn’t know police work entailed running around a college dorm with no real direction in sight and asking students to submit to an unwarranted search without even explaining what they were looking for.

Lafayette Hall has continued to have safety issues regarding who is in the building and where. Last semester, a non-NYU intruder infiltrated the dorm and harassed two students in their rooms.

“The BLT was very blasé about it,” said CAS senior and former RA Maxwell Freyre, who left the role between the fall 2021 and spring 2022 semesters. “It wasn’t even like they said, ‘Hey, it happened,’ and moved on from it. We were barely told about it, so it was all hearsay. I wasn’t there when it happened so the only reason I knew … was because I saw Washington Square News publish about it. It just shows the corruption and how they don’t actually want to share anything with us. Because you’d think as RAs they’d tell us something like that.”

In an attempt to lessen the stress RAs have experienced in dealing with emergency situations, NYU formed the Incident Response Team, a group of professionals with backgrounds in social work, student development and other assistive professions. IRT members are stationed in each residence hall every night. Now, rather than calling the RA on duty in an emergency, campus safety officers are instructed to call the IRT member assigned to their hall. The IRT has changed the RA role significantly — RAs now focus more on community development and making students feel at home. Freyre said that with the IRT in place, he didn’t have to write a single incident report for the entirety of the fall 2021 semester.

“The thought process, and, in turn, the effects we hope to see, is that rerouting those crisis-related responsibilities to a team of professionals will alleviate the unnecessary stress that RA’s were experiencing,” said Christopher Stipeck, the director of NYU residential staff and programs. “The RA role is a leadership position within a community, and sometimes leadership is stressful, I recognize that. My hope is that if somebody is stressed that they express this to their Building Leadership Team. Everyone manages stress differently, but the BLT is there to help however they can.”

Around the same time as the police incidents, we were in the process of renewing our RA contracts for the next academic year. NYU, however, had made a few crucial adjustments to the RA role. For one, the Lafayette RA staff was cut in half, doubling the responsibilities of every RA with no extra compensation. Each RA is now responsible for double the residents, double the programs, double the nights on duty.

Additionally, RA duties now include a minimum of working three hours a week in the residence hall’s resource center — receiving and sorting packages, assisting with dorm administration duties and acting as general administrative support for the hall. Previously, the only RAs who worked there were those already employed as office assistants at $15 an hour. NYU essentially turned that minimum-wage job into free office labor.

We weren’t even well prepared for the role to begin with. Because of COVID-19 restrictions, our training was held virtually in the form of various slideshows and six-hour Zoom calls.

“The training was awful — are you kidding me?” Becker said. “Going through a slideshow for three days — what the heck was that? I understand the nature of the pandemic, but I felt so unprepared going into it. I really relied on my co-RA because she was a returning RA from the previous year. I didn’t even know the rules.”

As anyone who was a student at that time could tell you, Zoom is a challenging way to learn. Not only is it hard to focus on the material for such an extended period of time, it’s also completely hands-off.

As we watched from dorm rooms we weren’t allowed to leave while quarantining, the Lafayette Hall staff explained where we should direct students to go in case of an emergency evacuation. Those who didn’t need to quarantine hadn’t even moved in yet. Unless you had lived in Lafayette Hall before, it was almost impossible to orient yourself within the vast 18-floor building. Even after our 14-day quarantine finished, the staff never tangibly showed us what to do or where to go, offering only a few how-to documents on a Google Drive for reference. During a false fire alarm at the start of the fall 2020 semester, I didn’t know where to tell my residents to go. Even I was never shown the way out.

Stipeck told me that over 90% of RAs say they’d recommend the role to other students. But I’ve lost faith in the job. I was disheartened at the lack of turnout to virtual events, but I couldn’t blame residents — I didn’t really want to be on Zoom either. More than that, I was frustrated that when my coworkers, residents, friends and I asked for support, we were met with shallow condolences. I was dejected that the university asked for more work without additional compensation, especially when the majority of RAs are working because they need financial assistance.

“There is so much potential in the role,” Becker said. “It looks really good on a resume. There is significant financial help in free housing and a free meal plan. But you have to know what you’re getting into. And you have to be able to handle the stress, and the pure, utter frustration of being in situations where you have absolutely no control and you’re not trained or prepared at all.”

This is a job that asks you to work days, nights, weekends and holidays. Your bedroom is your office and you’re never off the clock. On the nights you’re on duty, you won’t be in bed until at least 1 a.m., and you spend the whole night dreading the startling ringtone of the duty phone. To ask for more and offer nothing in return sends a message that, outside of the work they provide, students who work as RAs just don’t matter to NYU.