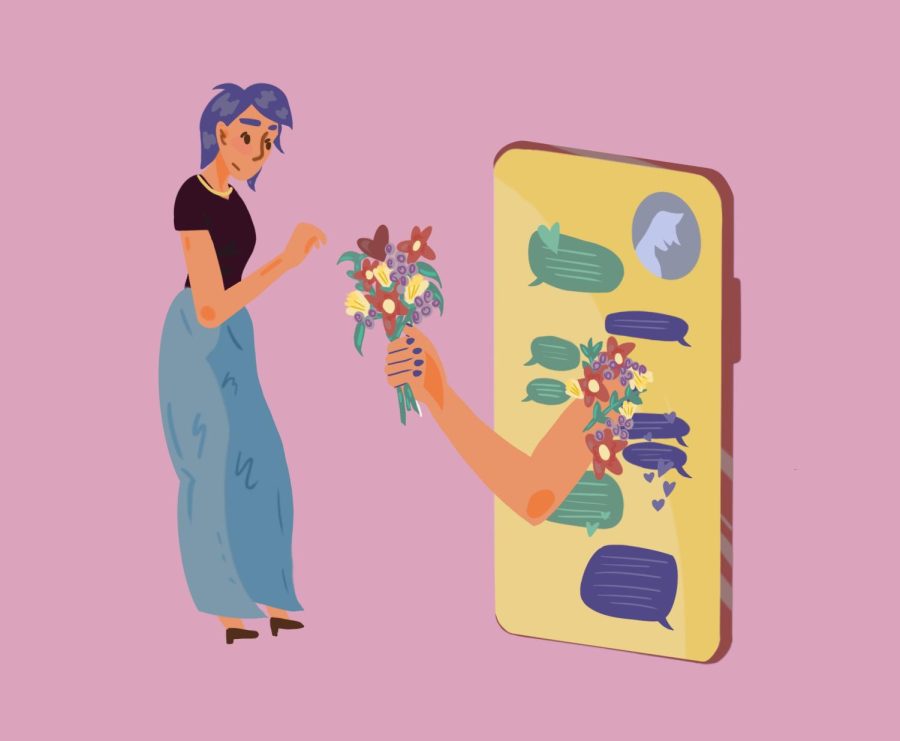 Tinder hookups and sexting scandals: our staff share their strangest and cringiest stories of dating in the modern age.

I had been dating a guy for around three months. We had snuck into my room and were hooking up and as we switched positions, he winced really hard. I asked him what was wrong. His thumb was absolutely swollen and turning blue. Turns out he sprained it because he sat on it and I had to take him to the ER.

I matched with a guy on Bumble at the beginning of fall 2021. He seemed alright, but we didn’t have a particularly strong connection, so we stopped talking after a while. Fast forward a couple months, and one of my WSN coworkers ends up cat-sitting for him. These two things happened completely independently.

I matched with a guy on Tinder just a day after downloading it for the first time. We started talking a bit and it was going well until he informed me he had swiped right because he thought my friend in one of my pictures was hot. Needless to say, I unmatched with him right after that.

In freshman year, my date and I had to be walked home from a Welcome Week event after he fainted in line for the student comedy show because he got too high and hadn’t eaten or drank any water all day. He was about seven inches taller than I was and I had to catch him. Everyone watched me struggle trying to carry this man, and the Welcome Week leaders said they had to walk us back to Founders “for safety.” It was my first date ever.

One time there was a random pair of women’s underwear in my boyfriend’s family home, and I got a text from his mom asking if it was mine. It wasn’t mine, and we all spent a solid hour debating whether this meant his dad was cheating. It turned out to belong to an extended family member that had stayed there a few months before, and the family dog had stolen it and kept it. The underwear was really ugly, so I’m offended they even thought it was mine.

In my junior year of high school, my then-boyfriend’s super conservative Mormon parents found our sexts on his phone. They drove across town to my house at 8 p.m. to talk to my family about “the nature of our relationship,” a conversation that included such gems as “don’t you want to wear white on your wedding day?” And “don’t you want to tell your husband that you stayed pure for him?” Moral of the story: Always use Snapchat.

It’s high school, junior year. This was the first somewhat legit relationship I had been in, and this guy and I were dating for around four months at this point. We went to a boarding school, so it was hard to find places to hang out as a couple. But my dorm room had this music practice room in the basement that was soundproof, so you can imagine what went on in there. One time, we decided to go in and fool around. Just as we were getting ready, the door swings open, and it’s another girl and her hookup, who’s maybe four years older than her. We just stared at each other for 20 seconds. Then they laughed at us and left. She apparently snitched on me, too — I had to talk to the adviser of student affairs about it.

While I was in high school, there was an album release party for a band I was really into. I was invited, so I brought along the girl I was kind of seeing at the time and a few friends. We arrive, the record starts and it’s really good. My friends and I were really into the music, standing close to a speaker and quietly enjoying the scene. The girl who I came with — we’ll call her Iman — was not so into it. In her boredom, Iman noticed some friends she had made at another band’s show, a band I am not really into. Suddenly, the record was overtaken by noise, and the rest of the room and I turned to find screaming coming from Iman and her friends. It turned out the friends were groupies for this other band and were sharing stories of romantic escapades. No one else was amused, and it was a tense and quiet drive home afterward.