A photo hoarder’s monologue: streets IN digital & ON analog

Finding beauty in capturing the streets of New York City through digital and film photography.

As someone who has spent most of his life in cities of different shapes and sizes, street photography almost feels like the default category of photography for me. I didn’t start off knowing that what I was doing was considered street photography — at the beginning, it was just trying to get the most satisfactory image captured and saved on my phone. I wasn’t even using an SLR camera. It was purely the desire to frame, capture, edit and finally preserve the image that was driving me to carry on. I was consistently discovering my photography style on the streets of New York City: framing shots so that passerby could enter the image at the right moment, finding the best angle for lights to bounce off wet surfaces on rainy nights, and including modern skyscrapers and historic buildings in the same frame. The complexity and volatility of the streets make capturing it all so much more satisfactory for me, and the desire almost turns me into a hoarder of images. What I capture and keep doesn’t necessarily always have a deeper meaning or significant story behind it — sometimes it’s just a superficially beautiful shot that I can’t resist. Trying to fulfill this desire on the streets tends to be more challenging and more rewarding because I will always continue trying to get “the decisive moment,” a term crafted by the pathfinder of street photography Henri Cartier-Bresson and then exploited by all the cliche-spouting photographers who came in his wake — myself included. 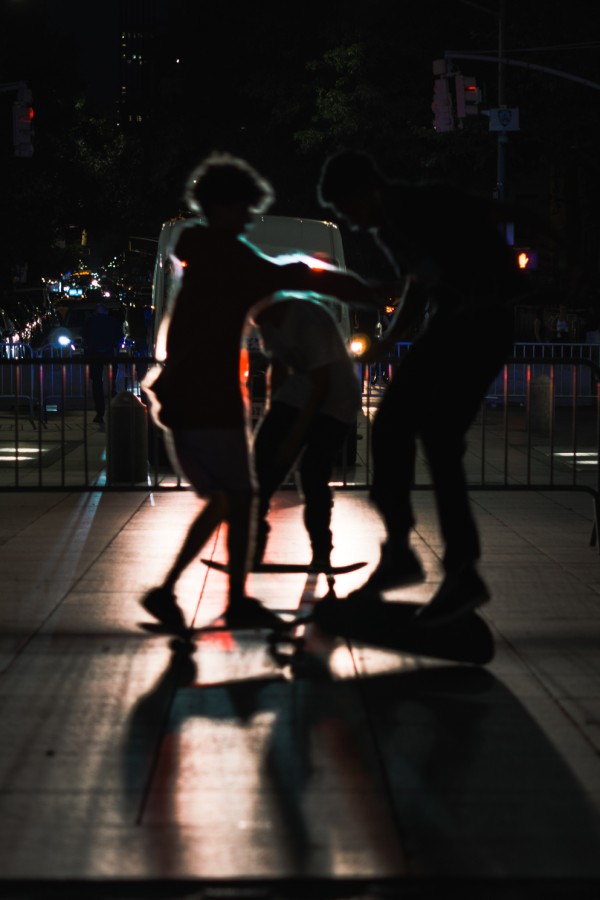 Speaking of cliché, how about street photography in Manhattan? This small island is probably the most recognizable city in the world, with its constantly evolving silhouette and streets that pulse busily with every mode of transportation ever invented. There’s always so much going on in this place — events and behaviors that would be considered absurd elsewhere seem to be a daily routine on the streets of Manhattan. It’s almost impossible not to do street photography here. When I arrived in the city last September, I was thrilled to realize that it was like a buffet of beautiful shots for me to collect: people walking across the sharp border of sunlight and shadow at a crosswalk, the Empire State Building in the golden hour, skaters at Washington Square Park. But soon I realized that my sensibilities have changed — I’m taking more and more for granted, and the desire to capture the fulfilling image has been fading and harder to realize at the same time. Shooting with my mirrorless camera or iPhone makes everything so fast and convenient, but probably too easy. There is no cost for shooting without thinking: You can always try to salvage something with Lightroom or just delete it. The semiconductors and the codes are always looking out for you, with the P mode or multi-metering or whatever new trick Apple has created for the iPhone. I promise you I’m not being ungrateful here. But I started to feel like I stopped evolving as a photographer and a hoarder, and that I was seeking a change. 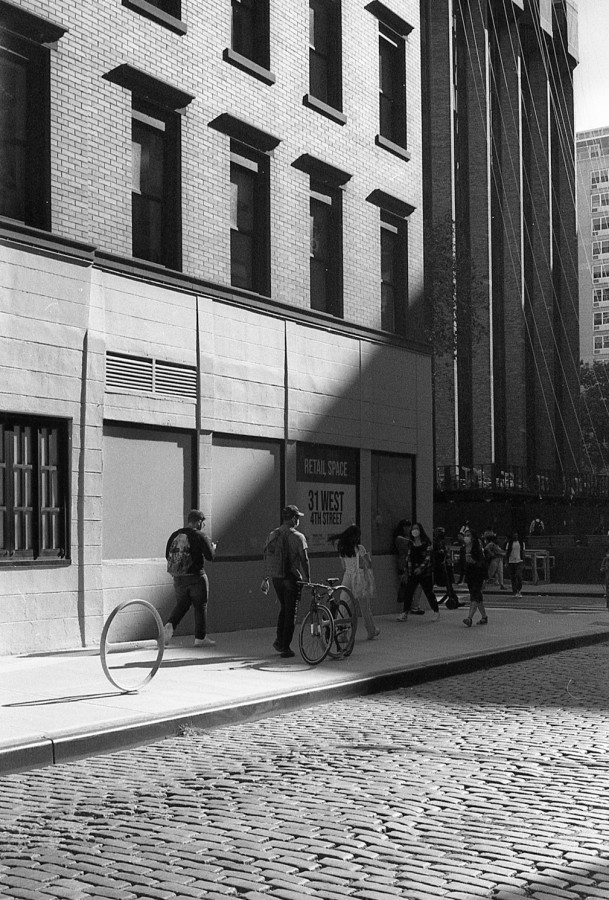 The streets on film

It’s small canisters with film rolls winding inside. You stick it inside a camera a few decades older than you, pull the advance lever, meter the light, twist the exposure and aperture dials accordingly, hit the shutter button and repeat another 35 times. Finish up the roll and send it to a store that develops and scans it for you. Oh, and you’ll need to spend around 30 bucks for every 36 photos. Somehow, this process has become more fulfilling for me than digital photography ever was. It created a whole new mindset that I switch to every time I hold my film camera. Every single shot carries monetary weight; every single shot is done by an irreversible process of lights traveling through the lens, leaving a physical mark on the photosensitive materials of the film; every single shot could be easily messed up with focus and exposure, and it would be entirely my fault. With every single shutter release being so much more precious, I began to treat each shot with more patience and thought. I have started to focus on capturing more transient objects, like human beings. I have become more aware of the lighting of a scene, something I’ve learned from shooting black-and-white film. The hassle and constraints of shooting film have brought me closer to the photos I take and have rendered the sense of ever more indulging and addicting satisfaction.

What you are seeing and reading here is the result of a combination of street photography, film photography and New York City. Strangely enough, most of the photos that ended up here were taken outside of Manhattan. Even so, they are all about Manhattan, capturing it from a pier or viewpoint that extends beyond the crowded island.

Developed for web by Manasa Gudavalli and Sam Tu.