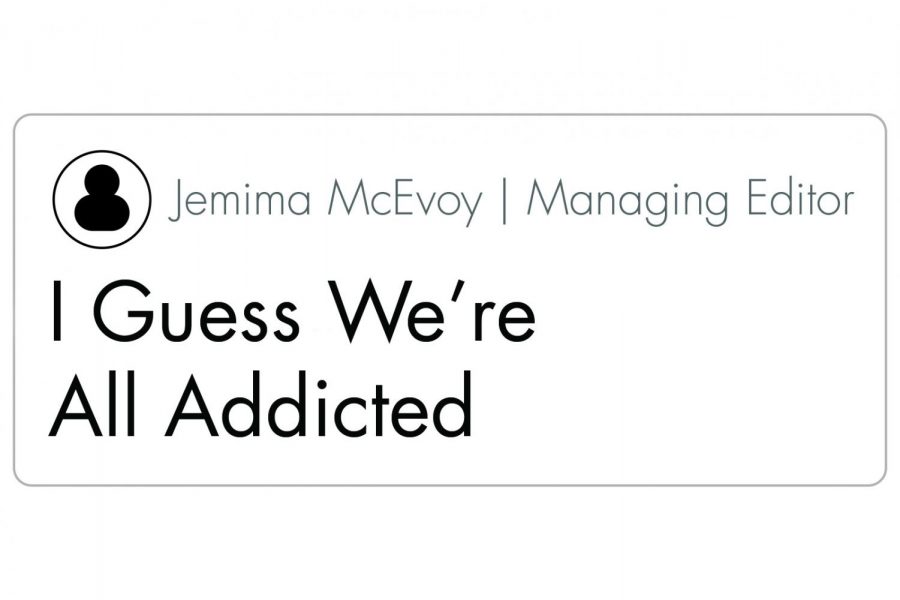 I Guess We’re All Addicted

If someone asked me whether or not I’m addicted to social media, I’d say no. When I think of social media addicts, I envision a room full of people scrolling through Instagram and messaging people on the internet, remaining completely oblivious to the fact that an actual human being is within arm’s reach — this is a situation that we all come across often.

In my mind, I’m not one of those people. I don’t go on my phone when I’m having a conversation with someone, I don’t relentlessly scroll through Instagram or Twitter and I often forget to respond to text messages until a few days after I receive them. However, I wanted to take a closer look at exactly how much I use my phone and what the results meant in the context of social media addiction.

After downloading an app called Moment, which monitors how much time you spend on your phone each day, I watched my phone use for a week. The results were surprising, and a little concerning. For a non-addict, I certainly used my phone a lot. Although there was a big range in my screen time, I spent an average of 68 minutes on my phone per day throughout the week. There was a peak at two hours and 22 minutes and a low of 20 minutes, which I’ll attribute to my phone dying early on in the day.

There is not an exact cutoff for how many minutes of phone use a day constitutes addiction; it’s not that simple. However, it’s important to recognize that social media and phone addiction is a real issue that can have negative side effects. PsychGuides explains that feeling the need to constantly check your phone and always keeping your phone with you are symptoms of addiction. According to statistics published on PsychGuides, 60 percent of college students in the United States consider themselves to have a cell phone addiction, 71 percent of people sleep with or next to their cell phones and 35 percent of people wake up and think about their cell phones, while only 10 percent think of their significant others.

All of this information is quite terrifying — especially when I scrolled through a list of cell phone addiction indicators and felt myself identifying with a number of them. I wanted to understand why people find social media so addicting as that relates to increased smartphone use. James Tee, a former adjunct assistant professor in the Department of Psychology at the Graduate School of Arts and Science, taught a class last fall on Neuroeconomics and Consumer Neuroscience. Although his research focusses on psychology in relation to making economic decisions, he touched upon the topic of the consumer dynamic within social media platforms.

Tee thinks that the way advertisers appeal to individuals on websites like Facebook might play a part in why people use social media so much. He cited a 2014 study conducted by a handful of people from California State University and the University of Southern California, which examined the neural systems subserving Facebook addiction. A summary of the article revealed some interesting conclusions to the research.

“The finding indicated that at least at the examined levels of addiction-like symptoms, technology-related ‘addictions’ share some neural features with substance and gambling addictions, but more importantly they also differ from such addictions in their brain etiology and possibly pathogenesis, as related to abnormal functioning of the inhibitory-control brain system,” Tee said.

Tee said that in the psychology, psychiatry and the scientific community in general, people are increasingly recognizing that social media addiction is a real addiction. But he said the problem remains that there is no quick fix to this type of addiction.

“There is no obvious solution,” Tee said. “So even if someone wants to do something about it — I guess you quit cold turkey, you muster your will to delete your accounts. It’s important to create awareness so that people have a choice, and the question after that is now that you’re aware of it, what do you do about it?”

A version of this article appeared in the Monday, Nov. 13. Email Jemima McEvoy at [email protected]