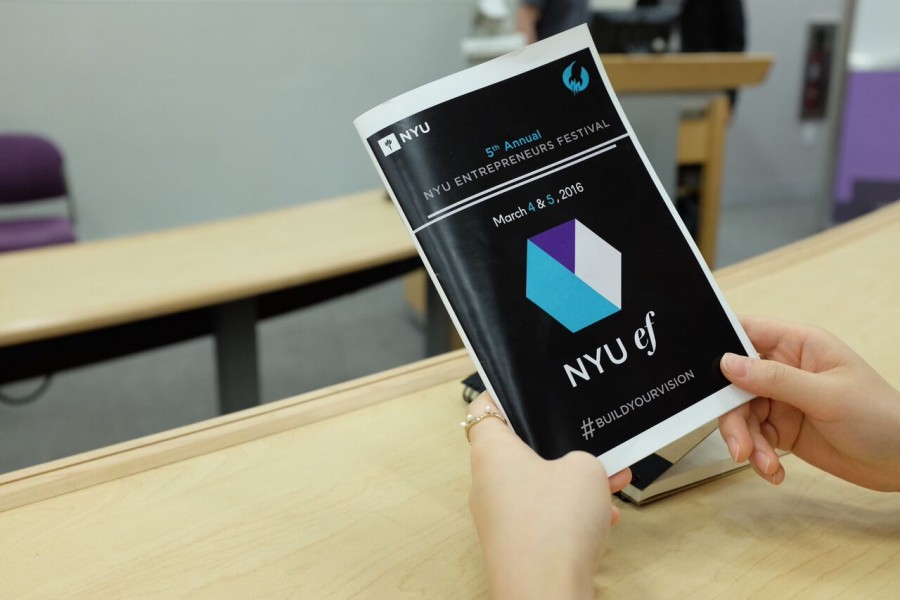 In an effort to promote entrepreneurship initiatives on campus, the Entrepreneurial Institute hosted the fifth NYU Entrepreneurs Festival, an event that brings together students, alumni and professionals to foster innovation and exchange ideas in the startup industry.

The festival featured three keynote speakers that have been successful in their fields: Libby Edelman, co-founder and senior vice president of fashion at the shoe brand Sam Edelman; Ragy Thomas, CEO and founder of Sprinklr; and Guy Story, founding CTO of Audible.com.

CAS junior and member of the organizing committee William DeLay said the ultimate goal of the festival is to connect students who have ideas with investors.

“It’s an effort to show sponsors a snapshot of entrepreneurship at NYU by first showing the clubs, then having a venture showcase,” DeLay said. “It’s an example of NYU’s prowess.”

In total, 12 alumni ventures and 20 student ventures were represented at the showcases.

One of those ventures, MedTimes, was founded by Tandon senior Yasir Ali. The startup acts as a platform that allows medical patients to get live updates of hospital wait times via text message.

Ali, who is currently taking a leave of absence to promote his startup, chose to attend the event because he was drawn to the festival’s inspiring atmosphere.

“I love the vibe that comes out of the festival,” Ali said. “Everyone’s trying to achieve the same goal even though they’re in different markets. I think the overall goal brings everyone together. I love that positivity.”

Throughout the weekend, attendees actively visited booths and panels, asking questions and exchanging business cards. For Kierthi Shaminathan, a part-time MBA student at the Stern School of Business, the weekend was a way to get advice on starting his own company.

“I feel like attending the panels and interacting with startups would be a good place to get information,” Shaminathan said. “I wanted to see some of the challenges people faced and how they got over those challenges.”

As the festival drew to a close on Saturday night, the three co-chairs of the organizing committee — Stern junior Lori Berenberg, CAS senior Daniel Tuchman and Tisch junior Lewie Kloster, sat down to discuss why they chose to be involved in the festival.

“We’re hoping to encourage and inspire anyone in the entrepreneurial community to pursue their dream and build what they really see,” Tuchman said.

After all, Kloster said, entrepreneurship is a very useful tool to students of any background.

“The entrepreneurship mindset can be applied to so many professions,” Kloster said. “We can lift stereotypes and plug [entrepreneurship] into other industries like film.”

Entrepreneurs of all levels of experience have a wealth of NYU resources at their disposal, including the Leslie eLab, Blackstone LaunchPad and W.R. Berkley Innovation Lab. For many, it is where their desire to crack the scene is forged, and in these resources they can get one-on-one assistance on how to build and grow a business.

“It’s a really exciting time for an NYU entrepreneur,” Berenberg said. “What’s going to happen next year? I don’t know. But if there’s somebody out there in the world considering starting a venture as an NYU student, absolutely do it now.”

A version of this article appeared in the Monday, March 7 print edition. Email Yeho Hwang at [email protected]