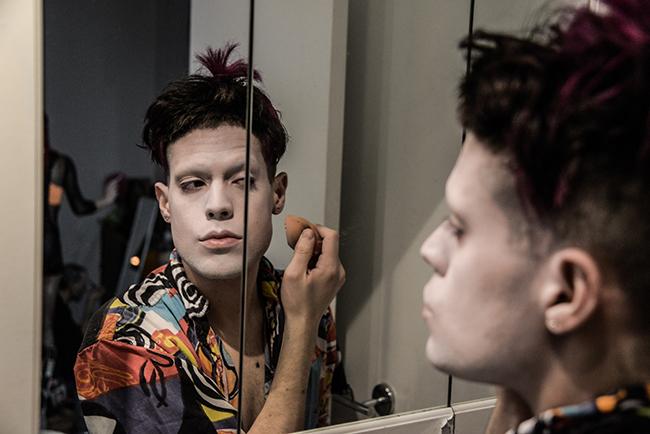 Half-jet black, half-fuschia hair shaved into a precise yet chaotic bowlcut, Nicky Ottav hadn’t slept from Friday to Saturday when we met at his Lower East Side apartment. Catching cat naps at early hours is pretty standard for the 21-year-old party host and Tisch photography junior, but you’d hardly say he’s a drag unless, of course, you’re referring to cigarettes.

Friends enter the Lower East Side apartment in head-to-toe looks, rainbow shades and performances of visual body art. Every attendee is dressed for a night like no other and Ottav’s cheeky apartment — complete with self-painted pop art murals — provides the perfect backdrop in which 20 rhinestones are better than one and love is always present.

“I’m just really honored to be able to be at the center of this,” Ottav said.  “Something that’s so positive for so many people,” Ottav said.

With almost 30,000 Instagram followers, the Los Angeles native has established himself as the face of the reemerging New York Clubkid scene since moving to the city in 2013. That candy-colored, alien image that is so enticing on his social media platforms is one Ottav masterfully crafts and constantly embodies. Every look the young artist births captures his unique and unapologetic essence, and it’s this contagious celebration of individuality that is the true cornerstone of any Clubkid event. Even as guest lists climb to 170 people or more, Ottav ensures the soul of the Clubkid community remains.

“I’ve had the privilege to meet people from the original movement that have been around doing this forever,” Ottav said. “When they come out to see me and my friends in the club they tell me, ‘Wow! Watching you guys, that spirit and that atmosphere is stillalive today!’”

Following in the footsteps of this iconic Clubkid culture of the 1980s and 1990s, Ottav is both inspired and supported by his partying predecessors — who include one of the founders of the scene, James St. James. Ottav has bonded with St. James over everything from drugs to Founders Hall, appearing twice on St. James’ cult YouTube video series, Transformations.

“I get giddy every time he likes my stuff online or we text or call,” Ottav said. “On top of everything, we’ve become friends. I really like when people who are originals have respect for the ones that come after them.”

Indeed, an evening at a Nicky Ottav party is a night brimming with the energy of a not-so-distant past time. That spirit is alive in the pulsing lights of venues like Bushwick’s new Flash Factory, communal cigarettes, alcohol and even in the process getting to the club. The hot hellions even hit the party via the subway, providing a relentlessly fun spectacle for bitter locals lost in their headphones.

“One of the things I really like doing that harkens back to the bygone era is taking the train instead of everyone splitting off taking Ubers,” Ottav said. “I feel like every time we do that it feels like we’re in a different time.”

Tradition certainly inspired today’s kids, and that reverence is evident even in the new wave of Clubkid culture. While he draws from fashion icons like Grace Jones and Leigh Bowery and frequently blasts his favorite ‘90s pop band Deee-Lite, Ottav recognizes that his outfits are more than just a look.

Having modeled at New York Fashion Week and even collaborated with the legendary Patricia Field, Ottav’s creativity knows no boundaries and neither does his contagious spirit. Be warned that the glitter cannons will sound on the day of Ottav’s graduation, signaling the beginning of a long and literally bright journey for the soon-to-be superstar and those lucky enough to be on his guest list.

“For us, this is a really genuine outlet for our creativity, for our energy, for our art,” Ottav said. “Whereas certain people will go to the club for a photo or to be seen, for us it’s really a platform to feel comfortable. We’re there
to have fun.”

A version of this article appeared in the Tuesday, Feb. 16 print edition. Email David Bologna at [email protected]