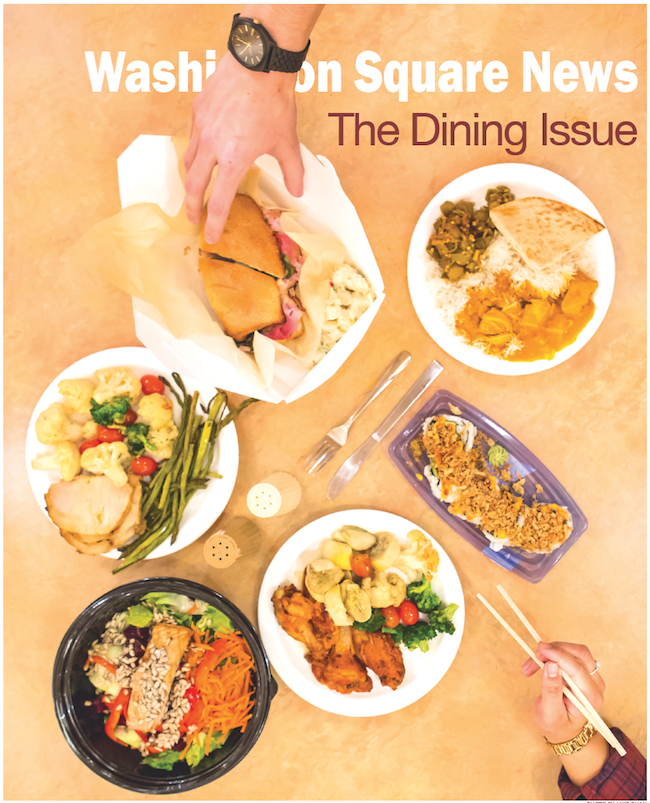 For many students, NYU’s various dining halls are the main source of food throughout the school year. However, while cafeterias offer a range of healthy options, it’s not as simple as a calorie count to tell if you’re making the right choice with
your meal swipe.

We looked at two typical meals from the Hayden and Third North dining halls — including a main entree, two sides and dessert — and compiled their total nutritional information to determine whether this food was in line with the USDA’s recommended nutritional intake. Looking at balanced meal from two different dining halls, WSN purchased a meal at Hayden with a hamburger, Moroccan chickpea soup, garden salad, cucumbers and a chocolate chip cookie. From Third North, the meal consisted of brown rice with spinach as well as chicken and vegetable stir-fry.

According to the USDA’s dietary guidelines for 2015-2020, on a 2,000 calorie diet for women and a 2,400 calorie diet for men, people should be consuming about 46-56 grams of protein, 130 grams of carbohydrates and 2,300 milligrams of sodium per day. The meals from Hayden and Third North both contained about 86 grams of carbohydrates, over half of the recommended daily intake. However, their total calories — 590 for Hayden and 900 for Third North — and amount of sodium — 770 for Hayden and 880 for Third North — stayed in line with the amount recommended by the USDA.

Dr. Marta Fiorotto, Associate Professor of Pediatrics and Nutrition at Baylor College of Medicine, said that analyzing a single meal for its nutritional value is dependent on what else the person eats throughout the day. When looking at the two meals from Hayden and Third North, Fiorotto noted that they were a bit high in fat and calories, and don’t provide much calcium. The fat content for the Hayden meal was high despite the fact that it didn’t include fries.

“This is too high in calories, especially fat,” Fiorotto said in an e-mail about the Third North meal. “Both brown rice and spinach are very good, but the preparation seems to have a lot of fat that makes them more calorie-dense than they could be.”

Dining hall meals can be healthy as long as students watch their portions and balance their diets. Ultimately, Fiorotto said students should be conscious about the food choices they make when eating at a dining hall and regulating what they eat throughout the day. For example, Fiorotto suggests putting mustard rather than mayonnaise on a burger, or choosing an oatmeal raisin cookie over chocolate chip.

“Nutrition education of the students is important,” Fiorotto said. “Depending on what else one eats, these meals could be just fine, or not so fine.”

A version of this article appeared in the Monday, Feb. 1 print edition. Email Angela Liao at [email protected] 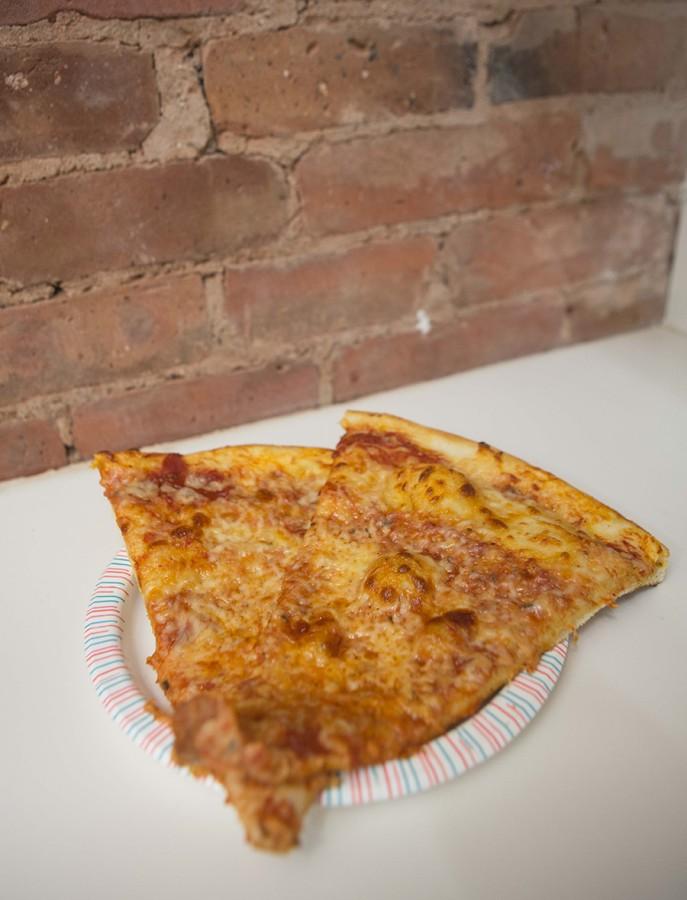 It is almost impossible to step into any dining hall without hearing complaints from freshmen about the high cost and quantity of meals they are required to purchase. All freshmen are automatically assigned the 300 Flex meal plan priced at $2,466, which provides $150 Dining Dollars and 300 meal swipes at $7.72 each. But if you’re tired of the dining halls, try one of these local favorites for comparably priced eats.

Inspired by street food in Beijing, Vanessa’s Dumplings provides easy access to everyone’s favorite Chinese comfort food. One can enjoy eight boiled vegetable dumplings for only $5.49 or a grilled chicken sesame pancake sandwich for $2.99. Their 30 piece bags of frozen dumplings are perfect for nights in with friends at less than $12 a bag. Vanessa’s also offers free delivery until 10 p.m.

This conveniently located falafel restaurant has long been a late night favorite of NYU students.

Albeit a crowded hole-in-the-wall, Mamoun’s is the oldest falafel restaurant in New York City and their traditional recipes have earned them a near perfect rating on Yelp.com. Mamoun’s famous falafel sandwich — along with three other vegetarian sandwich options — is just $3.50. Their popular shawarma sandwich is $6.00.

Fuku, one of the latest ventures of the team behind Momofuku Noodle Bar and Momofuku Milk Bar, has quickly become a favorite of those seeking an alternative to Chick-fil-A, even though it’s on the pricier side. Fuku’s signature spicy chicken sandwich features a large, sustainably sourced deep-fried chicken thigh marinated in habanero purée, buttermilk and  spices inside a Martin’s potato roll with pickles and butter. The sandwich is $8 and is best paired with fries or slaw, both $3.

Due to the massive size of its slices, many NYU students rank 2 Bros Pizza a step above the average dollar pizza place. With a minimalistic menu and a cash only policy, 2 Bros is the ideal snack after a night on the town. The beloved pizza place offers a combo that includes two slices of pizza and a canned drink for only $2.75.

Tortaria, a casual Mexican sandwich shop, is well known for its party-like atmosphere. Menu favorites include the $7.81 Mexican grilled cheese with Oaxaca cheese, tomatoes and salsa and the $7.35 Tacos al Pastor with grilled pork and sweet and sour pineapple salsa. Tortaria also has a full bar and sells a variety of Mexican pantry staples.

A version of this article appeared in the Monday, Feb. 1 print edition. Email Taylor Nicole Rogers at [email protected]

In terms of overall experience, Palladium is the clear winner. They’ve got the best salad bar in the biz, solid pizza, Indian food, sushi— and a menu that is constantly changing and offering variety. What’s great about Palladium is you can eat healthy or be utterly indulgent. Oh, and there’s actually room to sit. Of course, the real star of the show is Palladium brunch. They bring out all the stops for this meal. The dining hall’s beloved Sunday feast is a weekly reminder that Palladium is the best of the bunch — the chocolate fountain is all it took to win me over.

The best thing you can get at Palladium: Sunday brunch, Indian food, sushi

What you should avoid: Watered-down soda fountains

Kimmel is another student favorite, as demonstrated by the excessive lines around lunch hours, and for good reason: variety! You have a pasta bar, you have Mexican, you have deli sandwiches. Also, how cute is Chloe’s Soft Serve station? Kimmel is centrally located, always buzzing and even has outdoor seating. Plus, the Peet’s Coffee on the second floor is a nice alternative to the excessively long lines at the Starbucks down
the block.

The best thing you can get at Kimmel: Variety, healthy ice cream, quesadillas

What you should avoid: Bumping into people

Quiznos. Chick-Fil-A. That random breakfast corner called Over Easy. A salad bar. Jamba Juice! What more do you need? Bland tasting pizza? Go downstairs for that. Upstein is where it’s at. Sure, there’s never enough seating and the Chick-Fil-A doesn’t serve their full menu, but at least Upstein tries. Of course, don’t rule out the Kosher cafeteria. Zoe Siegal, a junior, says, “Jews love it. And some non Jews.” So, there you have it.

The best thing you can get at Upstein: Smoothies, popular chain restaurants, kosher options

What you should avoid: Trying to bribe the staff for more than two Chick-Fil-A sauces

Downstein — also known as “Weinstein Passport Dining” — also gets variety points. I can’t imagine going to Downstein when you have Upstein right upstairs, but apparently some people do it. You can choose from pizza, pasta, vegetarian options, deli choices and a grill. Downstein is a little random, and there’s something kind of depressing about eating underground, but it is definitely not
the worst.

The best thing you can get at Downstein: Pretty much anything

What you should avoid: Having high expectations

Hayden — the mecca for social freshmen. It’s your basic dining hall, with a salad bar, grill, pastas, deli sandwiches and horrible bagels. Like a lot of the other dining halls, there’s a good chance you’ll find what you’re looking for at Hayden, but it won’t be the best meal you’ve ever had. However, it does have a great
atmosphere.

The best thing you can get at Hayden: Cookies, a new freshman friend, breakfast

What you should avoid: Questionable looking vegetables

To give an example of how irrelevant U-Hall is, I’ve been spelling it UHaul up until a few days ago. It’s far, random, and also underground, but the Burger Studio at U-Hall is not horrible — you can customize your own, get a veggie version and use a cute little machine. The ability to order from your phone is also a plus. But overall, U-Hall has about as much
variety as this year’s
Oscar nominations.

The best thing you can get at U-Hall: Burgers

What you should avoid: Pretty much anything other than burgers.

The Third North dining hall is like that aunt who can’t cook but still tries. Despite being decently sized, there aren’t that many options and the menu is pretty boring. But every once in awhile the grill serves something mildly exciting. And by the way, do not even try walking in just to look around. Swipe or go home.

The best thing you can get at Third North: Grilled cheese, ice cream (if the machine is
working), bacon

What you should avoid: Everything else

A version of this article appeared in the Monday, Feb. 1 print edtion. Email Monica Hanna at [email protected]