Where candidates stand on our concerns

Hillary Clinton supports raising the federal minimum wage to $12, and endorses worker organization for higher wages. Clinton is working to pass the Paycheck Fairness Act to reduce workplace discrimination based on gender and has fought for paid family leave.

She endorses background checks to reduce gun trafficking and condones making straw purchasing, or illegal firearm purchasing, a federal crime. Clinton supports reform of existing gun legislation to prohibit those who suffer with mental illness from purchasing a gun.

Her New College Compact policy would eliminate the need for students to take out loans for public colleges and would make community colleges tuition free. The plan requires students and family members to pay what they can within their means and would be funded by limited tax expenditures for high-income taxpayers.

Clinton’s climate change policy aims to install 500 million solar panels across the nation and to generate enough renewable energy to power every home in 10 years. Clinton opposes the Keystone XL pipeline, stating the environmental impact of its construction would outweigh its benefits. 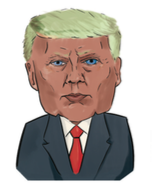 Donald Trump has not released an economic policy to address wages, but he vows to create jobs if he becomes president. Trump supports keeping the federal minimum wage at $7.25 an hour and argues that raising the minimum wage would increase the number of jobs outsourced from the U.S.

His campaign strongly supports Second Amendment rights, affirming that law-abiding citizens should have the freedom to carry any firearm of their choice. Trump also advocates for background checks regarding updated criminal and mental
health records.

Trump has not publicly announced his stance on higher education. He does, however, support cutting funds from the U.S. Department of Education for grades K-12.

In regards to climate change, Trump has gone on record stating it was “a hoax.” Trump supports the construction of the Keystone XL pipeline and has stated the United States should take full advantage of drilling its own oil.

Trump proposes a revenue neutral tax plan, aimed at relieving the burden on middle class families and stimulating economic growth. His platform creates a simpler tax code with four brackets and states no business will pay more than 15% of its income
in taxes. 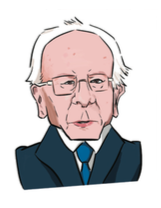 Bernie Sanders fiercely supports increasing the federal minimum wage, with a plan to nationally raise it to $15 by 2020. If elected, Sanders will sign the Paycheck Fairness Act in an attempt to decrease the gender wage gap by reinforcing the The Equal Pay Act.

When it comes to gun control, Sanders advocates for universal background checks and banning assault weapons. However, Sanders voted against the Brady Bill gun-control act, stating he opposed the inclusion of a mandatory five-day waiting period for gun purchases.

A key aspect in Sanders’ campaign is transforming our energy system away from polluting fossil fuels and toward energy efficient and sustainable sources. He also voted against the approval of the Keystone XL pipeline.

His tax plan includes raising taxes for the top 1 percent as well as enacting a tax on Wall Street speculators, much of which will fund his plan to make higher education more affordable.

Jeb Bush opposes raising the federal minimum wage, stating it should be determined by individual states. Bush has not announced a policy to address the gender wage gap.

Bush supports expanding gun owners’ rights and increasing the number of concealed-carry permits. As governor, Bush enacted the “Stand Your Ground” law to allow Floridians touse guns in self defense. He also signed pro-hunting laws into action during his time as governor.

Bush supports the Keystone XL pipeline, stating its approval would increase GDP by over $3 billion and would support 42,000 jobs during its construction. Bush believes believes the potential domestic energy source will lead to higher wages, lower gas prices and smaller electricity bills.

Goals for tax reform include simplifying the tax code by reconstructing its brackets and eliminating its loopholes. Bush’s plan would cut taxes for most individual taxpayers and businesses to foster U.S. job creation.