Lost to History: Covering Conflict in the age of eternal protest 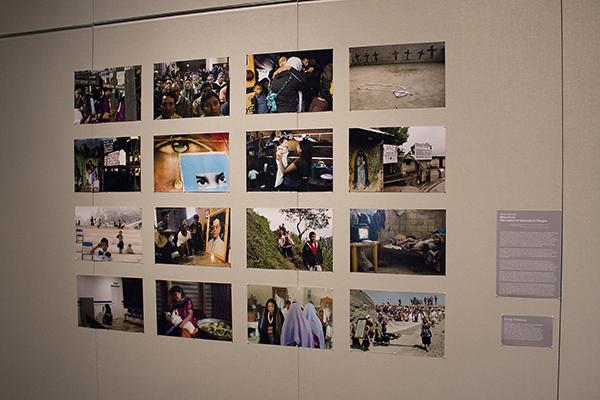 Photojournalism provides a visual history that both enriches and complicates our understanding of the world. In its wall-to- wall display of photos, the Gallatin School of Individualized Study launched Human Rights Week with “Lost to History: Covering Conflict in the Age of the Eternal Present” and aimed to illuminate stories that would otherwise go unseen or unheard. Paired with the gallery opening was a panel discussion with photojournalists Andrea Bruce and Ron Haviv, along with Communications Director of Human Rights Watch Emma Daly.

The gallery comprises works by Bruce and Haviv, as well as NYU undergrads Emily Pederson and Karanjit Singh. All of the works in “Lost to History” are photographs — we see gold miners toil in Lamal (“Amazon Gold” by Haviv), families grieving after a brutal massacre in Chiapas (“Bitter Fruit: The Legacy of Impunity in Chiapas” by Pederson) and Mariko, a Tibetan trans- gender woman who is preparing for the Miss Tibet Beauty Pageant.

Mariko’s story was captured by Singh, who was awarded the Gallatin Global Fellow- ship in Human Rights for this Tibet-based photo series, “Dreaming Rangzen,” on display as part of “Lost to History.” There, he created photo narratives of the growing political and social unrest in Tibet’s youth.

With his depiction of a shifting Tibet, Singh’s photo collection reflects this persistency to use photography as a driving force, not a processing system.

“Something we are trying to do, something photojournalists are trying to do, is get other aspiring photographers to become more curious and start asking more questions rather than have simple answers,” Singh said.

Bruce uses a similarly inquisitive nature towards her photography. She is best known for her photographic work in Iraq and Afghanistan, where she captured the conflict between U.S. military and civilians. Bruce’s contribution to “Lost in History” is a collection of photos titled “Living Under the Regime,” which focuses on the havoc civilians must endure in the aftermath of war.

In one particularly harrowing image, a man leans over his brother’s casket, shouting in rage — the deceased had died in battle while fighting in the Syrian Army.

Raising a camera at a funeral is highly intrusive, but for photojournalists like Bruce and Haviv, these tragic moments are critical to creating global impact.

“I went to one of my first funerals, and the family was inside with the person being prepared to be buried, and it was very emotional, people were crying, and I thought it would be respectful if I waited outside,” Haviv said. “After standing there for about ten minutes, a family member came out of the house, physically grabbed me, dragged me into the house, and said, ‘Photograph my child and tell the world what happened.”

Bruce elaborated on the intimate relation- ship between the photographer and the photographed. “We are allowed and we are accepted by the people who we take photos of,” Bruce said. “I think people understand. I think they want to tell their story. This world is full of so many people that it’s nice to not be invisible, especially when you’re going through so much. I think people understand what we’re there for.”

“Lost to History” makes no excuse for the utter disregard Westerners have for people they cannot see. The gallery presents photojournalism as the crossroads of reporting and human interest. The strong ties between photojournalism and human rights make “Lost to History” a successful addition to Gallatin’s Human Right Week and to human rights in general.

“Lost to History” will remain at the Gallatin Galleries until Oct. 14th.

A version of this article appeared in the Sept. 28 print edition. Email Audrey Deng at [email protected]