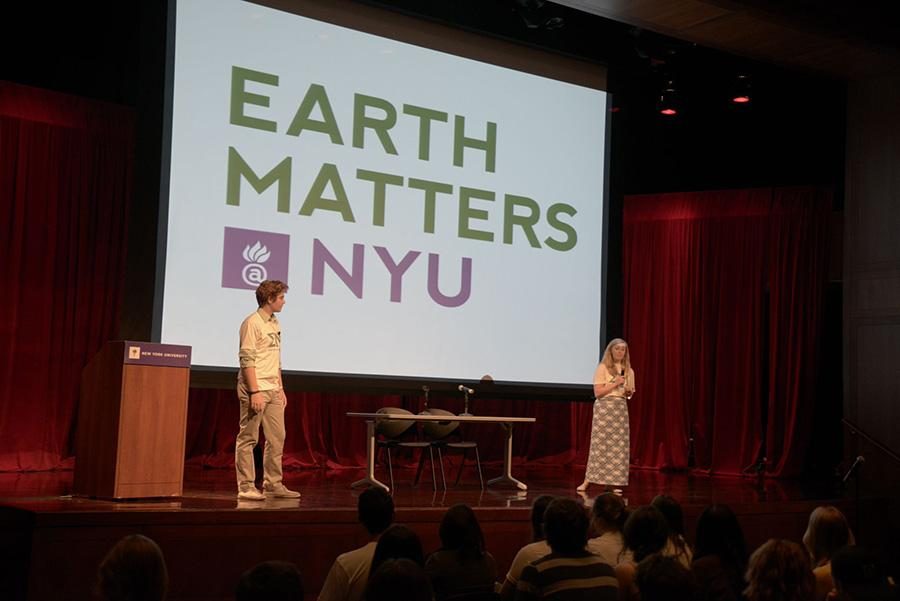 NYU students and faculty met at the Eisner & Lubin Auditorium for the This is Why We March Rally on Thursday, Sept. 19. Members of Earth Matters @ NYU and NYU Divest partnered to spread awareness about climate change and encourage people to unite.

Sherrell said the march was just the start of the movement to end climate change.

“This [People’s Climate Change] march is not the solution, it is not the end,” Sherrell said. “Rather, it is the beginning of mobilization and progression.”

McKibben emphasized the importance of the march, saying people must unite to address climate change.

“This is a systemic structural problem,” McKibben said. “We must come together to change the power balance and do something about it. If we can do that, then we all have a chance.”

Del Carpio Suarez said the march was an opportunity to foster grassroots change.

“We have the power to change our lifestyle and decisions,” del Carpio Suarez said. “It should not only be left to the hands of politicians.”

CAS junior and vice president of Earth Matters Davis Saltonstall said the goal of the march was to encourage world leaders to take action.

“This march is a landmark in history,” Saltonstall said.

CAS sophomore Catherine Dammer-Jones said the support for the march represented a popular desire for change.

“Everyone is becoming aware of these [environmental] issues, in a way that we have not seen in a long time,” Dammer-Jones said. “There’s definitely a unifying factor, and the passion that people have for this cause is remarkable.”

CAS sophomore Rebecca Weiser said she came to the This is Why We March Rally to learn more about climate change.

“We have to do something for our environment because it is the sphere we live in,” Weiser said. “I hope for more sustainable policies to take place and for more actions to be put into effect to help the environment.”

A version of this article appeared in the Monday, Sept. 22 print edition. Email Romie Williams at [email protected]