Gallatin sophomore is changing the world, one movement at a time. 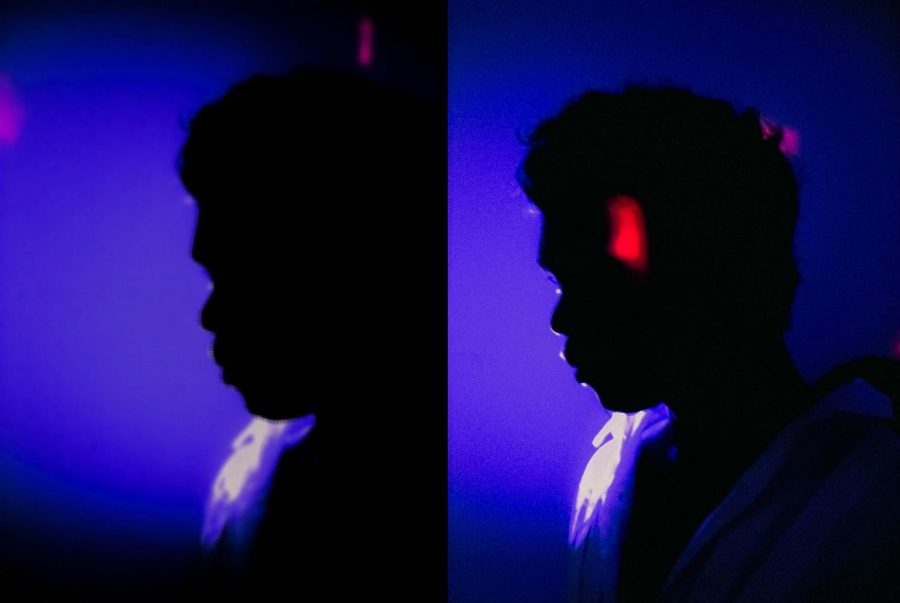 Julian Hammond Santander: "Thinking about capturing sexuality with Ian, it’s very important to focus on the power of selectiveness in showing. The idea that you’re only seeing as much as Ian—or I—want you to. Maybe it’s half a snarling mouth or the faint line down his abdomen, the outline of a face or an exposed chest presented proudly with pout." (Staff Photo by Julian Hammond Santander)

Ian Partman strode into the headquarters of WSN, his steps imbued with purpose. The first thing I noticed when I saw him wasn’t the headphones dangling around his neck or the shock of blond hair that crowned his head, but rather his calming presence. He greeted me with a handshake, and I felt welcome in a way that is rare within a school known for fostering feelings of isolation. Beneath Partman’s peaceful exterior, though, lies a fiery passion for social change.

Partman’s activism started well before he enrolled in the Gallatin School of Individualized Studies last year. Immediately after former President Trump’s inauguration, he organized a walkout at his high school in Washington, D.C., leading a group of students to the White House and the Capitol to protest the administration. As he stood among the crowd of thousands, he was struck by the capacity of collective action. However, he knew that more long-term organizing was necessary to stand up to an administration that routinely attacked the rights of Americans on the grounds of gender and sexuality.

“There’s some way that we could organize it better or more profoundly,” he recalls thinking. “I wanted to continue the vigor and the fire of my peers to advocate for other causes.”

And so he was called to action. He formed Ignite Collective in the spring of 2017 to organize mutual aid and direct actions to combat police violence in his hometown — an issue that disproportionately impacts Black and queer people. He continues to lead the organization today.

As a full-time college student pursuing a rigorous concentration in literature, art-making, and histories of catastrophe, crisis and disaster, he somehow manages to lead and advocate for change through several organizing groups.

“I think that a large part of my drive … towards making this world … a better place is driven by a frustration with the status quo,” he said. “But in the context of my personal experience, I’m a Black, queer man who grew up in Washington, D.C., which is a political nexus, but also a policing nexus.”

He spoke of his personal experiences of feeling targeted by the police, and how he witnessed violence as he was growing up. But rather than feeling dejected, he is enlivened with a passion to create a better, more life-affirming world for Black and queer people.

Recently, Partman received the Gallatin Global Fellowship in Human Rights, a year-long program that supports students working for human rights organizations. He has spent the last six months working for the New York wing of Survived & Punished, an organization that seeks to release victims of sexual violence who were imprisoned for defending themselves against their abusers. He helped commute the sentences of six people during his time at the organization. Such work is essential to create a world where victims of sexual violence — who are disproportionately Black, queer and transgender, are treated with the respect and kindness that they deserve. Partman hopes to meet the people that he helped free from New York’s prisons as soon as he can.

The communities that he fights for have had their survival criminalized for centuries. Whether by means of poverty, police brutality, or legislation that makes it a crime to use a bathroom that comports with one’s gender identity, so many facets of our society have denied people the basic dignity of inclusion.

“So trusting and steadfast in himself, Ian constantly reminds me not to limit myself by fear: fear of persistence, fear of perception, fear of oneself,’” Julian Hammond Santander, Partman’s close friend and WSN’s UTA Exposures Editor, said. “‘Go out and get what you want’ is something Ian has said to me.”

In addition to Partman’s direct action and community organizing, he is engaged in research that traces how the 13th Amendment has led to the justification of certain forms of slavery. The 13th Amendment was passed in the wake of the Civil War in an effort to abolish chattel slavery. However, it permits involuntary servitude to be used as a punishment for a crime.

The United States has one of the highest incarceration rates in the world, with over 2 million people in jail and 5 million people under some form of government supervision. 38% of the incarcerated population is Black, even though they compromise only 14.6% of the national population. These prisoners are often conscripted into involuntary work and receive an average pay of just $0.93 a day.

Later in our conversation, Partman noted that the 13th Amendment has been used to criminalize child slavery, wage slavery and forms of feminized slavery like sex trafficking. He sees immense possibility to remake the country in a kinder and more compassionate image — one where the scourge of racism and bigotry is eliminated through the abolition of our current incarceration system.

Partman plans to pursue a career in human rights law after he graduates, a natural continuation of the organizing work that he’s done to secure the rights of the Black and queer communities. He is insistent that the impending climate catastrophe will not deter him in his goals to explore more of the world. As he continues organizing for a better tomorrow, he is chronicling his experience growing up as a Black and queer kid in a book with the hopes of motivating people to find a common cause within his story.

“But this is not to say this all came without effort,” Hammond Santander said of Partman. “I feel lucky to consider him family. Ian will change the world. He will expand the minds of many and lead the charge for the future we want — and deserve — to see. This is something I haven’t said directly to Ian, but have said many times about him, so he’ll have to read it here.”

As our conversation drew to a close, I asked what initially drew him into his active involvement. Millions of people witness and endure the suffering that he has, but very few dedicate their lives to leading movements that seek to undo systemic national ailments. He credits his inspiration to the first time he got an iPhone.

“When Trayvon Martin was killed on Feb. 26, 2012, I was 10 years old,” he said. “I didn’t own a phone. And I remember hearing, watching on the TV … and I saw this future in which I walked outside and I took the wrong corner, I was wearing the wrong clothes. And that was my future.”

“The summer that I got my first phone … was the summer of the trial,” he added. And I remember when Trayvon’s killer was acquitted. I just went to Instagram and I remember seeing all of these different posts and … information about protests. This digital world of activism inspired me. As I got older, I became invested in activism as an idea and as a communicative tool to interact with people who wanted to make this world a better place.”

Partman’s work didn’t start with leading a thousand-person march or a mass campaign against a bigoted politician. His work started by logging on and tuning in. If you’re interested in bringing about a better world with Partman, you ought to do the same.