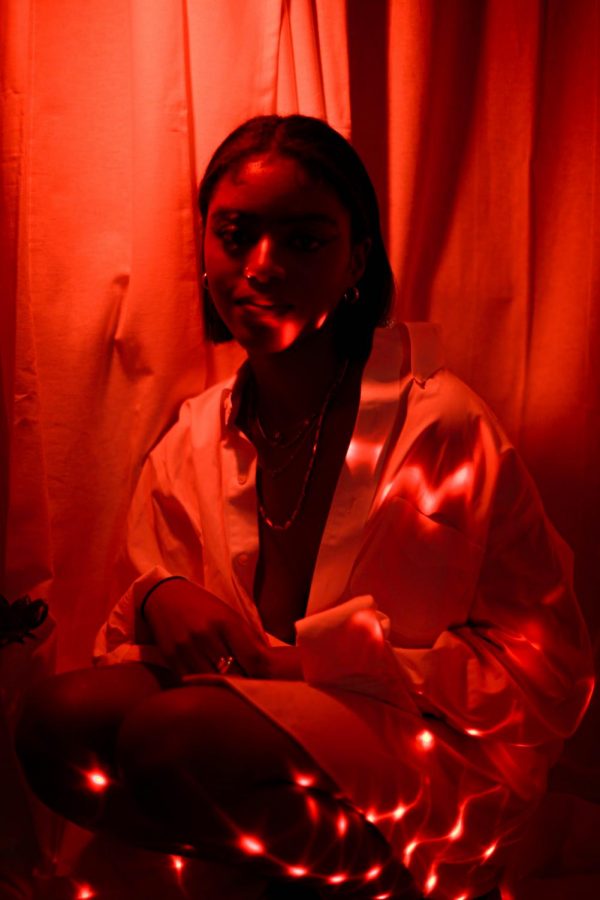 Josephine Lieberman: "I believe the best way to address fear, hatred, and lack of understanding towards progress in sex and body positivity is by showing female and LGBTQ pleasure and sexuality through the medium of art as a way to normalize otherwise 'taboo' topics and give people the opportunity to have open conversations about such things." (Photo by Josephine Lieberman)

Aneesa Julmice stands inside a dimly-lit art gallery on the Lower East Side. Her hair is slicked back in an updo and her graphic blue eyeliner matches her blue dress. She smiles for a photo. Vibrant images line the wall behind her: A topless woman wearing knee-high boots sitting next to Elmo on the subway. Big Bird reading a magazine. A woman wearing a lampshade on her head. These are Julmice’s digital paintings, where, she creates a lush world devised to reevaluate sexuality in new and challenging ways.

The gallery on Rivington Street was the site of Liminal Space, an exhibit that featured the artwork of four NYU students, including Julmice, who is a Tisch sophomore studying interactive media arts.

Growing up in Georgia, Julmice’s parents encouraged her to explore her creativity through activities like dance and music. In high school, she found a strong creative outlet in painting.

“Any chance I got at school I would take classes in art,” she said. “And my mom’s a teacher. She was always doing art projects with us at home. And I think for me, it kind of just stuck.”

She approached self-portrait assignments in Advanced Placement 2-D art and design by “trying to be as raw and feminist as possible.” A self-proclaimed feminist, Julmice wanted to explore genuine portrayals of the female body, beginning with herself. She says that she doesn’t shave her underarms and sports her natural eyebrows: “I paint all of that … my unibrow and everything.”

Perhaps unsurprisingly, one of Julmice’s greatest inspirations is Frida Kahlo, a pioneering Mexican artist whose self-portraits are vivid, honest depictions of life as a disabled, indigenous woman.

“I used to tell people I’m Frida Kahlo reincarnated,” she said with a laugh.

Technology plays a vital role in Julmice’s creative process. While she used to paint with oils on large canvases, she transitioned to a virtual platform using the Procreate app on her iPad. The convenience of being able to paint digitally has made it easier for her to harness the often fleeting strikes of inspiration.

“I used to paint in oils and I used to love painting massive, huge canvases,” she said. “It was always just kind of taxing … you’d have to fill your pallets and set up your easel and your canvas. I can bring my iPad anywhere.”

Her finished compositions are surreal, but behind them is a structured and logical process. Each new painting begins with an idea. Because her work is so pop culture-centric, reference photos are essential. Finding these reference photos takes up 70% of the time needed to complete a piece, Julmice said.

“The hardest part is looking for reference photos that fit together,” she said. “Once I establish a sketch, it’s super simple for me after that.”

This past summer, Julmice stumbled across viral mukbang videos on YouTube that featured people overconsuming large amounts of food, which sparked a fascination with society’s obsession with food and what it says about our identities. She then decided to create a collection of paintings titled “Eaters Anonymous.”

The project — and indeed much of Julmice’s craft as an artist — is about recontextualizing the female form in new and playful environments with food and fashion.

“It’s cool to see how she takes two things that are heavily advertised — food and fashion — and marries them,” Gallatin sophomore and fellow artist Gabrielle Narcisse said.

Being in New York City has also helped Julmice discover new fashion brands that have fueled her inspiration. Fashion’s influence is present in almost every painting she makes. In one of her pieces, a woman donned in gold Schiaparelli jewelry bites into a chicken drumstick. An ice cream cone is plopped upside down in a sky-blue Prada high heel. A Dior saddle bag is filled with milk and fruit loops.

“I don’t think the point of her making the sexual imagery more casual or pairing it with food is to necessarily desexualize it,” Narcisse said. “I think it’s to play with the idea of what sexuality can look like, to give power and autonomy to the female form and to reclaim sexuality as something positive in the beautiful surrealist world Aneesa creates.”

For Julmice, the exploration of food also extends to an analysis of inherent biases toward appearance and weight. In October, she posted two paintings on Instagram, both depicting a woman in a bikini and latex ski mask holding food to her chest. She used the post as an experiment to determine whether the thinner woman would receive more likes. When she pulled up her Instagram statistics, she found her theory validated.

“She is an artist that others have an easy time connecting with,” said Ari Elgharsi, a photographer and Tisch sophomore who was also featured in the exhibition.

Last year, she sold skateboard grip tape prints of her piece, “In the waiting room.” In the painting, a woman in an emerald pantsuit sits next to Big Bird, who is smoking a cigarette and reading a Playboy magazine. The grip tape sold out rapidly, which, for Julmice, was a welcome surprise. This fall, when she was asked to share her art at an exhibition, she eagerly agreed.

Julmice was surrounded by peers and friends as she showcased her art at Liminal Space. She was smiling, happy to be there and happy to be sharing her art.

“I think there’s your artwork, and it looks different to other people than it does to you,” Julmice said. “Sometimes, it’s nice to have the reassurance from someone else that they think it’s good.”