Pier 40 is a Soccer Oasis in a Concrete Desert

NYU soccer aficionados have found an international community in the worn-down fields of Pier 40. 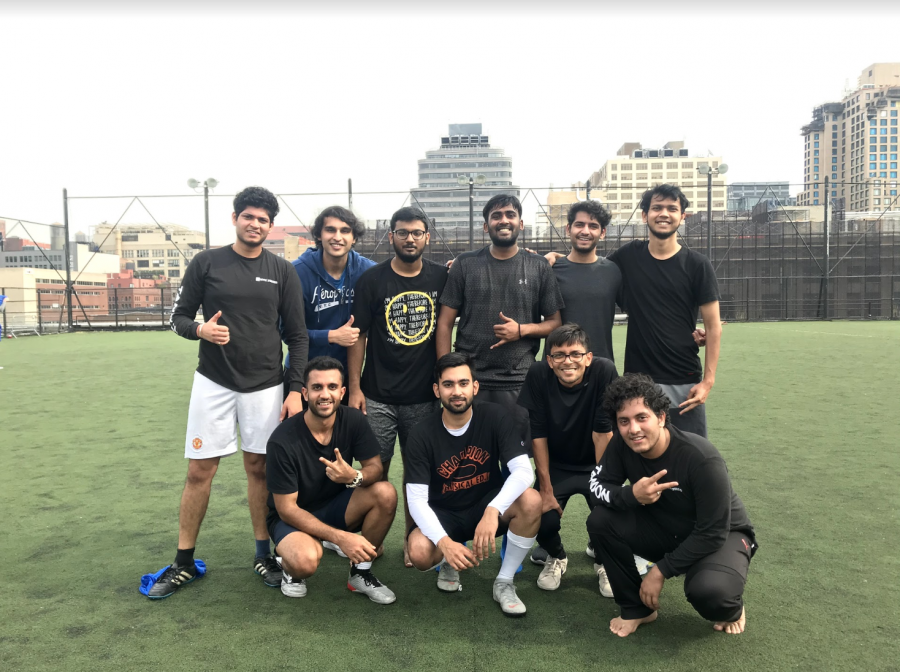 Tandon graduate student and FCBR midfielder Abel Kumar (first row center) and his teammates after their game against World 9. (Photo by Alejandra Arevalo)

Pier 40 is home to worn-down multi-purpose turf fields that serve the purposes of baseball, soccer or any other sport that players who descend on the fields want to play. Pieces of paper, cigarette butts and empty plastic bottles can be found scattered across the uneven ground. Yet Pier 40 is considered an oasis in the concrete desert of New York by the regular NYU intramural soccer players who have no better place to play their favorite sport in Manhattan.

The entrance to the pier looks much like a parking lot — unsurprising, considering that it has long-term parking rental areas. As you walk in, you have to maneuver between players who couldn’t find a spot on the field and are kicking their soccer balls by the entrance. In the back are two 65-yard-by-110-yard courtyard turf fields that look like one gigantic square. If, instead of going straight into the courtyard, you make a left, the stairs will take you to the smaller, but highly demanded rooftop field.
Rooftop Views
One Friday during the fall semester, NYU intramural soccer players began to fill the rooftop field of Pier 40. It was noon, and a picturesque view of the World Trade Center served as the backdrop for the wins and losses that were about to unfold.

Despite the less-than-desirable conditions of the pitch, SPS junior Alex Babu doesn’t know of any better soccer fields near NYU that are suitable and can be reserved to host the games every week. Until New York City invests more in the creation of public semi-professional sports fields in Manhattan, Pier 40 will be the go-to option for NYU intramural soccer.

NYU intramural sports are meant for fun, having tournaments and winners but no real prize, and all levels are welcomed. Players make their own team so all teams vary; the teams at Pier 40 happened to be dominated by South Asian players.

Babu, the only female intramural staff supervisor at the game, walked around with her printout list to sign players who had just arrived for their game. Although she rarely plays soccer and doesn’t belong to a team, she enjoys refereeing. Babu joined the intramural staff in her first year of college and has been coming to Pier 40 regularly since then.

For Babu, coming to the field is the best part of her week because she gets to leave the usual classroom setting and enjoy some refreshing time outdoors. She particularly likes the investment of the players giving their best in intramural soccer matches.

“Everybody who comes here is passionate,” Babu said. “Out of all intramural sports – I also work in basketball – in comparison, the people that come here want to win. Intramurals is for fun but often players take it really seriously.”

The two South Asian soccer teams scheduled to play were stretching and running from one side of the field to the other in preparation for their game.

Players rushed to change into their sports clothes as the intramural referees gave out blue and red bibs: red for the World 9 players and blue for FC Bay Ridge players.

Throughout the game, shouts in Hindi could be heard coming from both teams, occasionally mixed with some English words: “good pass,” “good touch,” “center,” “perfect.”

“Shoot!” an FCBR player said, as one of his teammates approached the opposite goal, but he couldn’t score.

As the players ran and shot the ball across the field, black clouds of crumb rubber billowed up and hit a couple of spectators sitting on the ground by the field’s sideline. After a 30-minute match, the final result was 3-0 with a win for World 9.

After the game, FCBR players patted each other’s backs and then collapsed to the ground, breathless, with sweat dripping down their foreheads.

Tandon graduate student and FCBR midfielder Abel Kumar was among them, sipping water and trying to recover his energy to stand up. Although Kumar had played in NYU intramural soccer before, this was the first game many of his teammates had ever played. Despite the loss, Kumar enjoyed the game and acknowledged the good performance of the opponents. After all, intramural soccer is supposed to be a fun activity, not a highly competitive one.

The FCBR players usually practice in Brooklyn, on fields like Pier 5, Cadman Plaza and others closer to Bay Ridge — the neighborhood where they all live, hence the name of the team. However, Kumar always enjoys playing at Pier 40.

“The view is amazing, and the field is nice,” Kumar said. “The turf could be better, but we can’t complain.”

Right after the match, FCBR arranged themselves for a team photo with New York’s perfectly illuminated cityscape in the background.
Courtyard Vibes
A mix of English and Mandarin welcomed players to the courtyard fields one Saturday evening. One field was occupied by a group of Mandarin-speaking players while smaller groups were spread out across the other field.

In one of those smaller groups, Korean was the default language among a dozen men in their 20s and 30s. They were all wearing shorts and soccer jerseys despite the 56 degree weather and swirling wind.

The Korean soccer group — they don’t have an official name — started with two players from Baruch College who then recruited fellow Koreans they met at Pier 40. Now, with more than 20 recurrent players, the team is comprised of a wide variety of undergraduate and graduate students from different New York colleges such as Pace, Columbia and NYU.

Before the game, the players followed their different preparation routines. One player smoked a cigarette sitting by the side of the field. Another player put on a sports strap cord for his glasses and went to join his teammate for a smoke. Others passed soccer balls to each other, often launching them through the holes in the protection nets surrounding the field. They would roll toward the more than 50 Hornblower cruise attendants lined up by the side of the soccer field, waiting to board their cruise, the last remnants of Pier 40’s history as a real port.

The Korean soccer group split into two teams to play, red and blue, a division mostly based on the color of clothes the players were wearing that day. After almost 20 minutes of preparation and waiting for everyone to arrive, the match began. Five minutes into the game, the red team scored the first goal of the night. The blue-team goalkeeper dove to stop it, but a red-team player sprinted toward the ball and managed to shoot it to the right side of the goal, far from the goalkeeper’s reach. That goalkeeper was CAS senior Teddy Son, the youngest player on the team at 20 years old.

Two years ago, Son was practicing alone at Pier 40 when a Baruch College player approached him and asked him if he wanted to join his group for a soccer match because they were short on teammates — in English, because he didn’t know Son spoke Korean too. During the game, the men started speaking in Korean to each other and Son realized that they were all of Korean descent.

As an international student who had had a hard time finding other Koreans with similar interests, Son soon became close to his fellow players even off the field. When not playing, Son joins them for Korean barbecue, exchanges text messages with them all day long and helps in the logistics planning for their next matches.

Although Son has played hundreds of matches with the group, the most memorable one was against a Chinese team that regularly practices at Pier 40 because it made him feel as if he was representing the pride and glory of his country.

“It was technically my international debut,” Son said.

After years of playing with the same group in the same place, Son has found a home in the courtyard fields of the pier.

“Pier 40 was the start of so many relationships for me,” Son said. “It holds a lot of great memories that I attach myself to.”

Looking at Pier 40 today, it is hard to believe that at the beginning of the 20th century it was the largest passenger and freight terminal in the Port of New York. Several piers were demolished to build this massive square structure which would provide plenty of space to passengers with a lot of luggage so they could easily navigate their way from the ships docked at the port to the streets of New York. When transatlantic steamship travel decreased in the ‘60s, Pier 40 became obsolete. It wasn’t until 1998, when the pier became part of the Hudson River Park, that it was restructured to become the “recreational oasis” it is now.

Although the courtyard that once hosted transatlantic travelers now hosts athletes, the international nature of Pier 40 hasn’t changed. Depending on the time and day, the demographics of players and the languages spoken on the fields vary largely. But the one commonality they have is their passion for sports, particularly soccer.