Pyrite, more commonly known as fool's gold, lacks the strength of real gold and falls apart with little effort. This series of images from Christian churches accompanies Deputy Exposures Editor Taylor Knight’s inquest into the validity of religion and its role in his life. 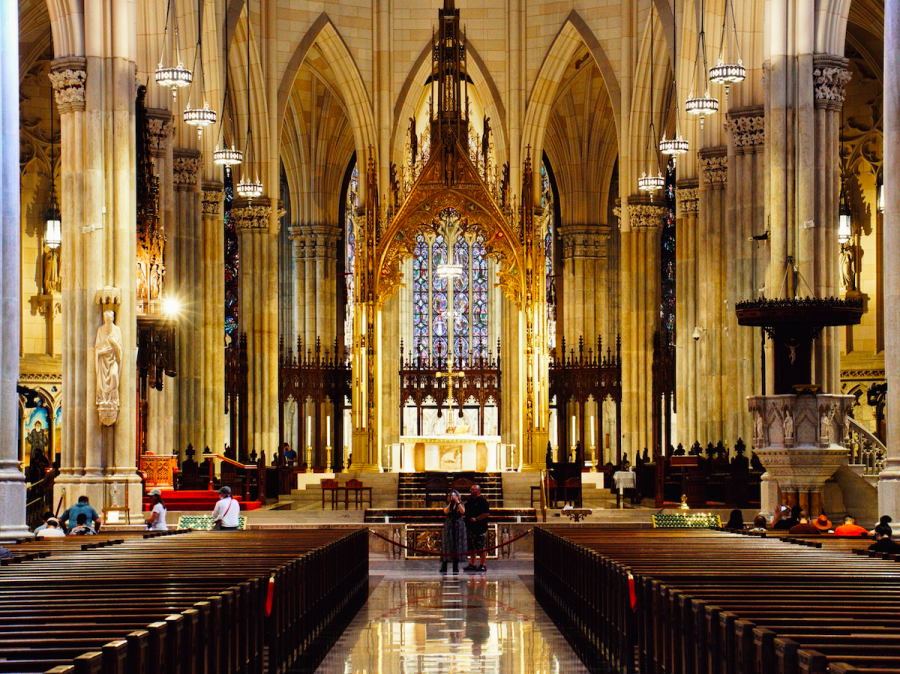 I prayed. I went to church. My family believed in God. I thought I did as well. It was only when I discovered Greek mythology through Rick Riordan’s Percy Jackson series that I realized there was a gaping hole in my Christian faith. It wasn’t that I suddenly believed in the gods of Mount Olympus or that I thought I was a demigod (though admittedly it was something I hoped for). It was the fact that I couldn’t understand how these gods and myths were any different from the one I was expected to take seriously.

I read the Bible voraciously, and I consumed countless stories about the inherent validity of God’s will. I loved these stories, so I chose to believe them. The fact that my parents believed them as well only helped my faith. However, when I finished Riordan’s series, I was struck with a far greater feeling: a deep connection to these works. They were much more believable than my old Bible tales, so why couldn’t they be just as true? Why are my Bible tales considered more reliable?

This was a question that struck deep inside me. No one I asked could give me a satisfactory answer, and thus my faith was irreparably damaged. As I grew older and did more research, I realized that I never truly believed — I just wanted to. Of course, this caused great conflict with my family, who assured me that I would come around and find God when I really needed Him. Fine, I’ve been waiting, and will continue to wait.

This long introduction is simply a disclaimer about myself before I describe what I’ve been feeling a lot lately. For the past two years, I’ve become really interested in religious history, specifically how the history of religion is intertwined with colonialism and the spread of indoctrination inside and outside of western Europe.

In the case of each Abrahamic religion, it seems that almost immediately after the formation of each faith, religion became an apparatus for political activity and a way not simply to protect one’s connection with God, but primarily to regulate societal norms against tides of outsiders. This phenomenon is present in the Holy Roman Empire, the Reconquista, the Muslim conquest of Persia and many more religious conflicts.

There were, of course, many who truly believed in God’s will and sought to enforce it, but it is indisputable that religion is frequently used to control its adherents and persecute its opponents.

On a smaller scale, religion is passed from generation to generation as a communal possession: “I believe in God, so my children will and so will their children because my religion teaches me to act righteously.” Religion has become commonplace, almost to the point where true belief loses emphasis in favor of performativity. For example, the phrase “I go to church every week” is often used to vouch for one’s moral standing.

This presents an interesting contrast between religion as a way for one to connect to one’s faith and religion as a tool for societal order. As I’ve grown older, this relationship has continued to gnaw at me. Although I’m a nonbeliever, it would be impossible for me to disregard the massive impact religion has on society.

I have the deepest respect for the Christian institutions of my upbringing. They have encouraged some of the greatest works of mankind — from shining cathedrals, stunning music, enormous records of history, and even important breakthroughs in mathematics and science. They have also allowed people from the largest and most diverse groups to come together for common causes of charity and political unity. Religion has served the purpose of preserving cultural traditions and creating common ground within and between racial groups where no bond would otherwise exist.

However, the common link between all of these things is that they emerged without proof of God. There has always been a conflict within communities of faith about the function and validity of religious institutions (see: the Reformation), yet these same institutions are what shape the world in the absence of God.

Is the Catholic Church important because it has some connection to God, or because it is one of the oldest, richest and most widespread powers in human history?

Is the inclusion of God in this equation simply a justification for an organization seemingly preoccupied with material endeavors?

Do the riches accumulated in pursuit of spreading Catholic faith spit in the face of that very faith?

These questions challenge me because I am not religious. I have great respect for the worldly achievements of these institutions, but is it appropriate for these gatekeepers to prioritize the earthly over the spiritual? Every day, millions of self-proclaimed believers twist and bend their founding texts to fit their worldly path instead of staying the course to fit their eternal one. It really makes you wonder: has the use of religion as a tool largely undercut its function as an avenue to faith?

While observing religion, I can’t help but be drawn to the architecture, the music, the tradition and the practices of religious institutions to the point of questioning my own unbelief. But every time, I am unconvinced.

Does anyone really believe anymore?

Or is it just much more convenient to act like you belong and hope for the best?

Is there any way to tell?

A version of this story appeared in the Nov. 8, 2021 e-print edition. Contact Taylor Knight at [email protected]