These four NYC-based tattoo artists illustrate how the human body can serve as an unconventional canvas. 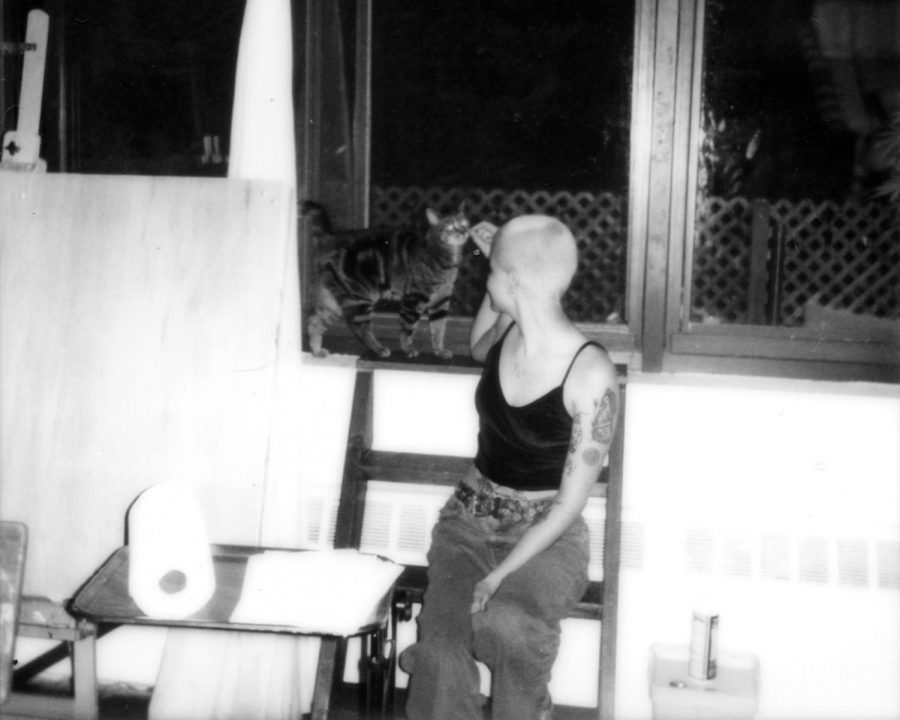 Getting a tattoo is relatively common, especially in New York City, but it is not typically considered a form of fine art. Although tattooing involves commissioning artists to create dynamic illustrations and graphics like a painter, the art is displayed on an unconventional canvas — the human body — and thus does not receive the recognition it deserves.

The act of getting a tattoo is revealing a piece of oneself while entrusting another to skillfully create a permanent piece of body art. Get to know the intimate artistry behind the medium as four New York City tattoo artists share their experiences.

Sara Arabzadeh: How did you get into tattooing?

Hazel DeMarco: I first started getting tattooed when I was 15 years old. It was always something that I was super interested in. I grew up in NYC so I often saw people walking around with really cool, beautiful tattoos. So, after I got my first tattoo, I immediately started getting tattooed a lot and going to different artists, figuring out what art I wanted to put on my body. But then it also affected my art style; I started drawing more, specifically designs that I knew would translate well from paper to skin.

Aaron Ginsberg: In 2000, when I was 16, there was this show on MSNBC called “Tattoos: Skin Deep.” It inspired me to pierce myself and buy tattoo magazines and get equipment. The point where I was able to start making tattoos didn’t happen until way later through a random turn of events. But skateboarding, punk music and magazines got me into tattooing.

SA: How would you describe what you do?

Esther McGregor: My main goal is to show that tattoos are an extension of oneself. You don’t have much choice when it comes to physical appearance, but with tattoos, you can alter your body. I want to enhance the way people look at themselves and make people feel more comfortable in their own skin.

HD: It’s definitely an art form, but it’s also a service industry, so you have to build a clientele, build a repertoire and have people recommend you to their friends. That’s really important. 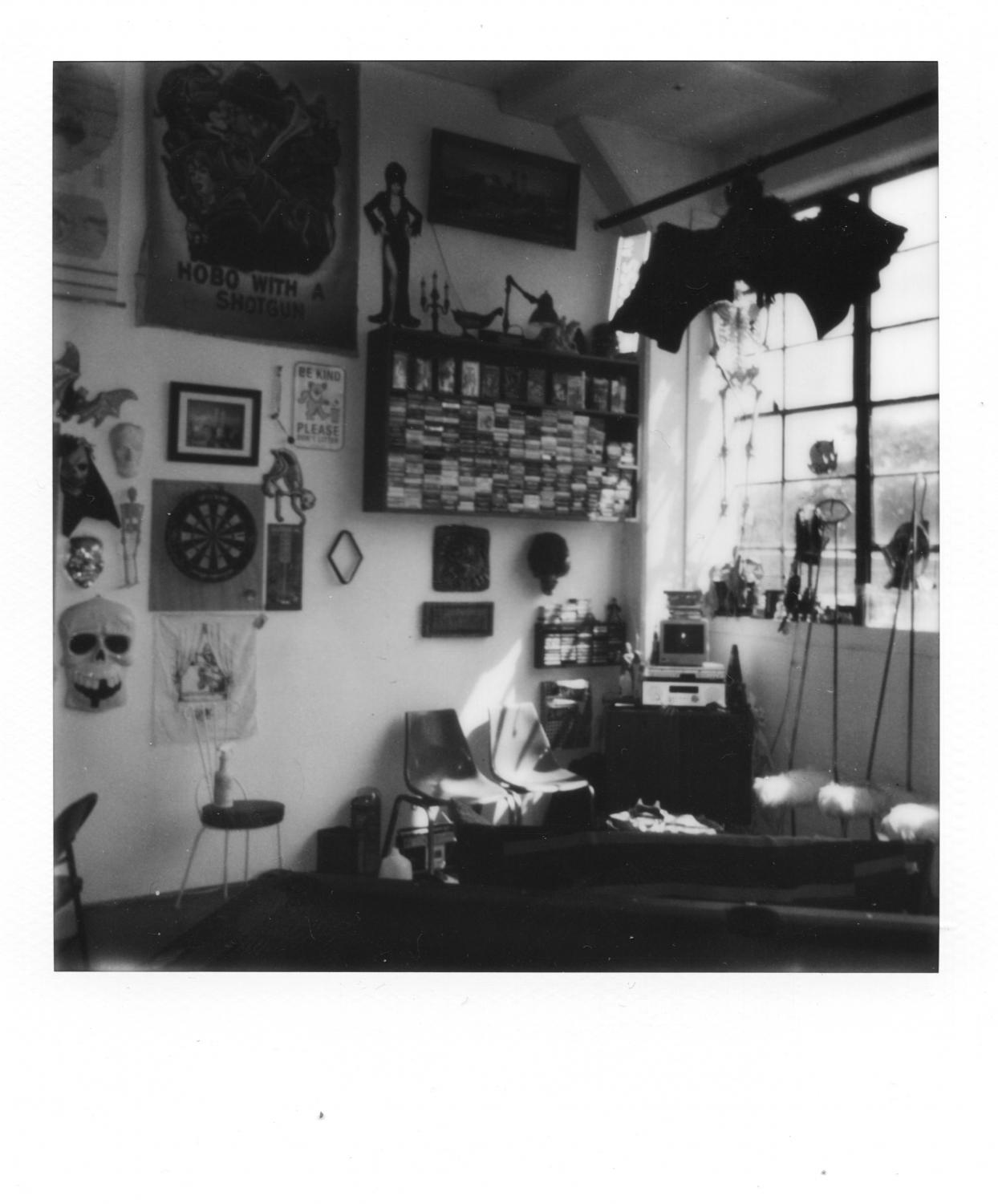 SA: What’s your favorite part about being a tattoo artist?

Phoebe Satterwhite: Meeting new people every day and hearing all their stories. Everybody tells me so much about their life and it’s so interesting to listen to.

HD: Job freedom. I can tattoo part-time and then I have time to explore art outside of tattooing, like painting and printmaking, which I’m really interested in. I don’t let tattooing completely take over my art style, and the freedom to explore other art forms while still maintaining a job in the art scene is really cool.

SA: What obstacles have you encountered within your career path?

EM: Not being taken seriously. I’ve been shut down multiple times and talked to quite rudely. A lot of tattoo artists are older, so I am often seen as a child. I’m 19, but I practice every day. I wouldn’t do it if I didn’t think I was good at it. There’s a lot of male presence, so it’s hard to make your name known as a female artist. When I was first looking for an apprenticeship, I was rejected by three male tattoo artists and got much warmer responses from female artists.

PS: As a self-taught artist, there’s a lot of stigma around the fact that I wasn’t taught professionally, but it’s just a privilege and accessibility thing. Not everybody has the money to get an apprenticeship. 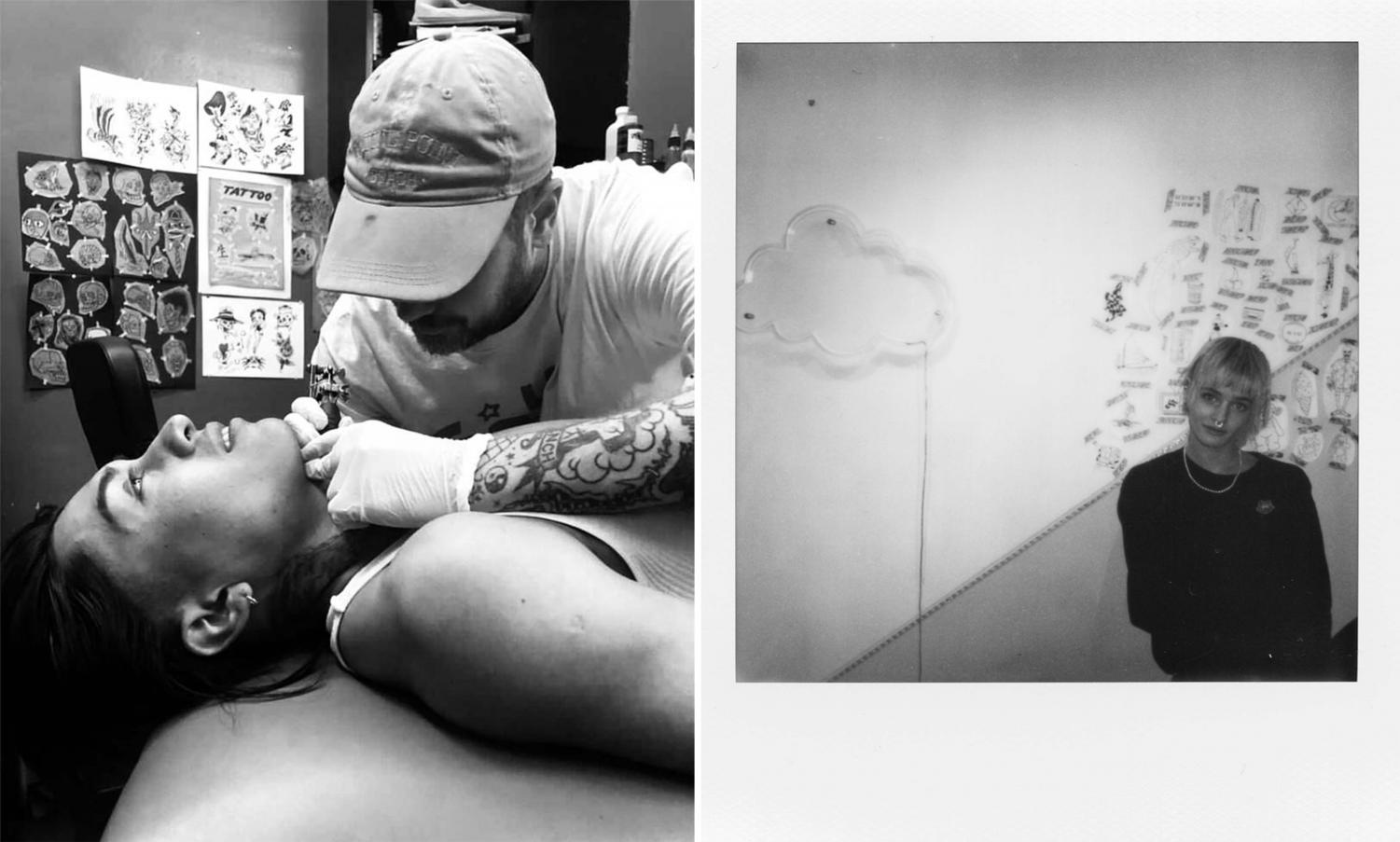 SA: Is there a new age of tattooing with Gen Z?

PS: Definitely, there are a lot more self-taught artists, queer artists and artists of color. It has completely changed the social norms of tattooing.

AG: I look at ‘70s, ’80s, ’90s tattooing as a sort of codified thing, and Gen Z, Instagram, DIY tattooing as its own scene. It’s some movement, like handmade stuff, small stuff, linework. It’s a departure from original tattooing, but still rooted in the idea of people who are outside the establishment that want to put carbon underneath people’s skin with a sharp object.

SA: How would you describe the bond between a tattoo artist and the person getting tattooed?

PS: It’s a consent thing. Tattooing is permanent and it’s akin to something really dangerous. Someone is trusting you to be safe and make good art.

HD: I am a service provider for the most part; I’m here to give a client what they want. Treating your client as just a canvas doesn’t go anywhere. It’s definitely intrinsic in its own ways. I find it really special when people come back to get multiple tattoos by me. It makes me feel like a part of their lives past just surface-level artist-client relations. Sometimes we’ll even become friends.

SA: There’s a level of vulnerability attached to having tattoos, presenting pieces of oneself externally for anyone to see. As a tattoo artist, I’m sure you get to know people on a deeper level. How does it feel to be trusted with not only a permanent piece of body art, but also the sentiment behind the tattoo?

EM: It’s a visceral feeling. It’s something that you search for in a lot of different areas and relationships in your life, but you immediately get when you’re getting trusted with a tattoo. It’s gratifying. People ask me if I get nervous before tattooing, but I believe that trust in yourself is important to the process. It’s definitely a lot, but it feels nice to be trusted with parts of people’s lives.

HD: It definitely makes me feel really good that people are willing to get my art, even if it doesn’t have a specific meaning. It takes on meaning by wearing it. A lot of times people come to me because a certain design sticks out to them, and they might resonate with it in a way that I don’t, but it means something to them. It’s also empowering when someone is a collector of tattoos and thinks I’m good enough to put in their collection of other amazing tattoo artists. 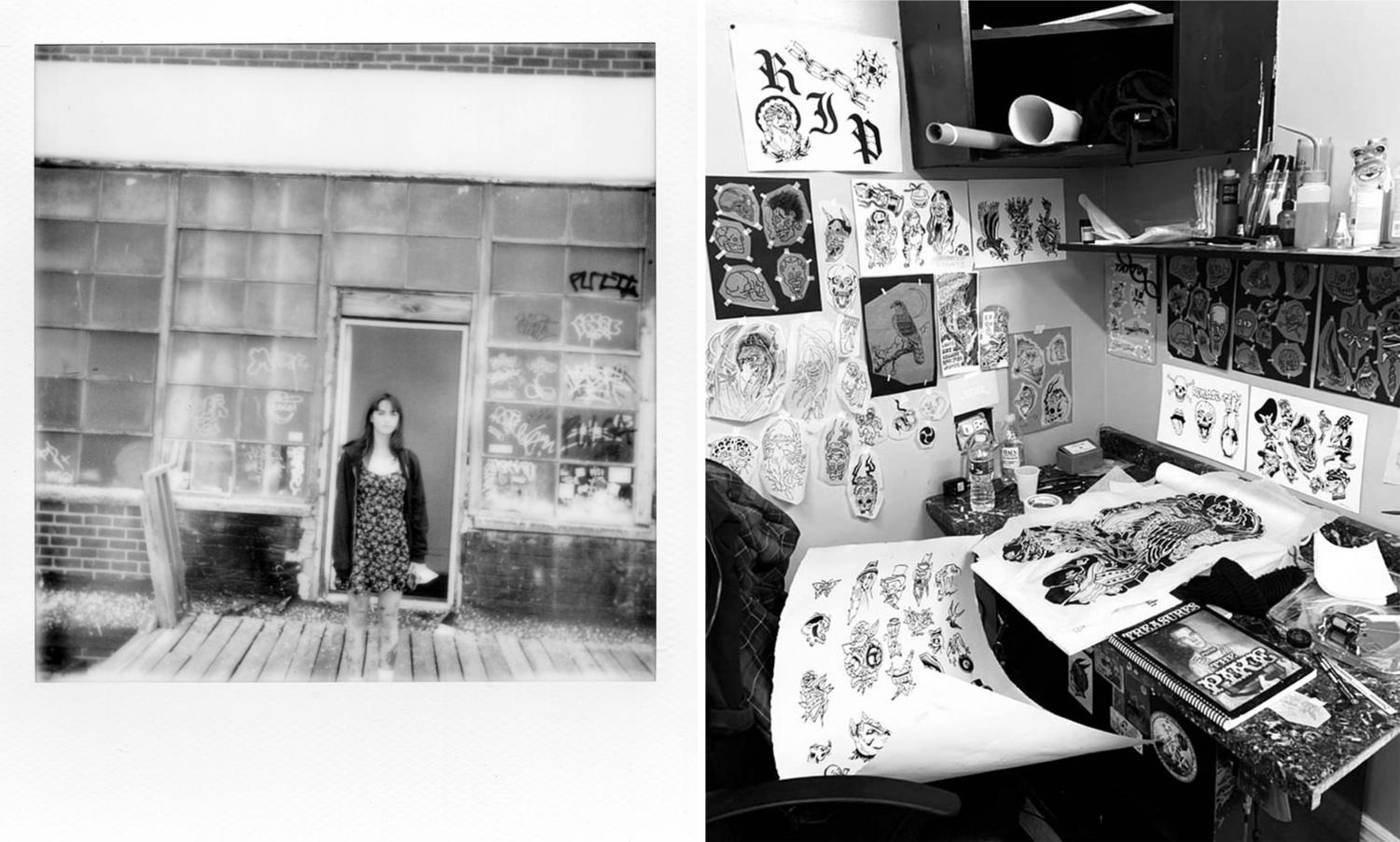 SA: How would you describe your style of tattooing?

EM: It’s sketch-like. I do a lot of line work. I can do whatever, but I am really trying to hone in on my own style so that you can recognize one of my tattoos as my own. I love bizarre concepts because that’s how I draw best. I look for what feels the best for me.

PS: Playful and trippy. I do hand-poked because it’s cheaper not having to buy the machine and other accessories with it. It’s easier to travel with and it feels a lot more intimate and precise. Every dot counts. The origins of tattooing come from hand-poking.

SA: Making art is already such a vulnerable and intimate act, so to have a permanent piece of body art elevates that to a profound form of vulnerability. Do you believe the level of vulnerability entwined with tattooing lends itself to understanding oneself better?

EM: Definitely. It tests you in a lot of different ways, especially when you get into tattooing professionally. It’s not just one skill. When I’m tattooing, I can’t think of anything else — I’ve never been so focused in my life. I really feed off of that because it is one of the only art forms that gives me such a level of focus. Being in that moment for a long period of time and talking to someone meanwhile allows me to be fully present. A lot of clarity comes as a result.

PS: I’d say so. I have learned that I am able to be more vulnerable with people I don’t know. 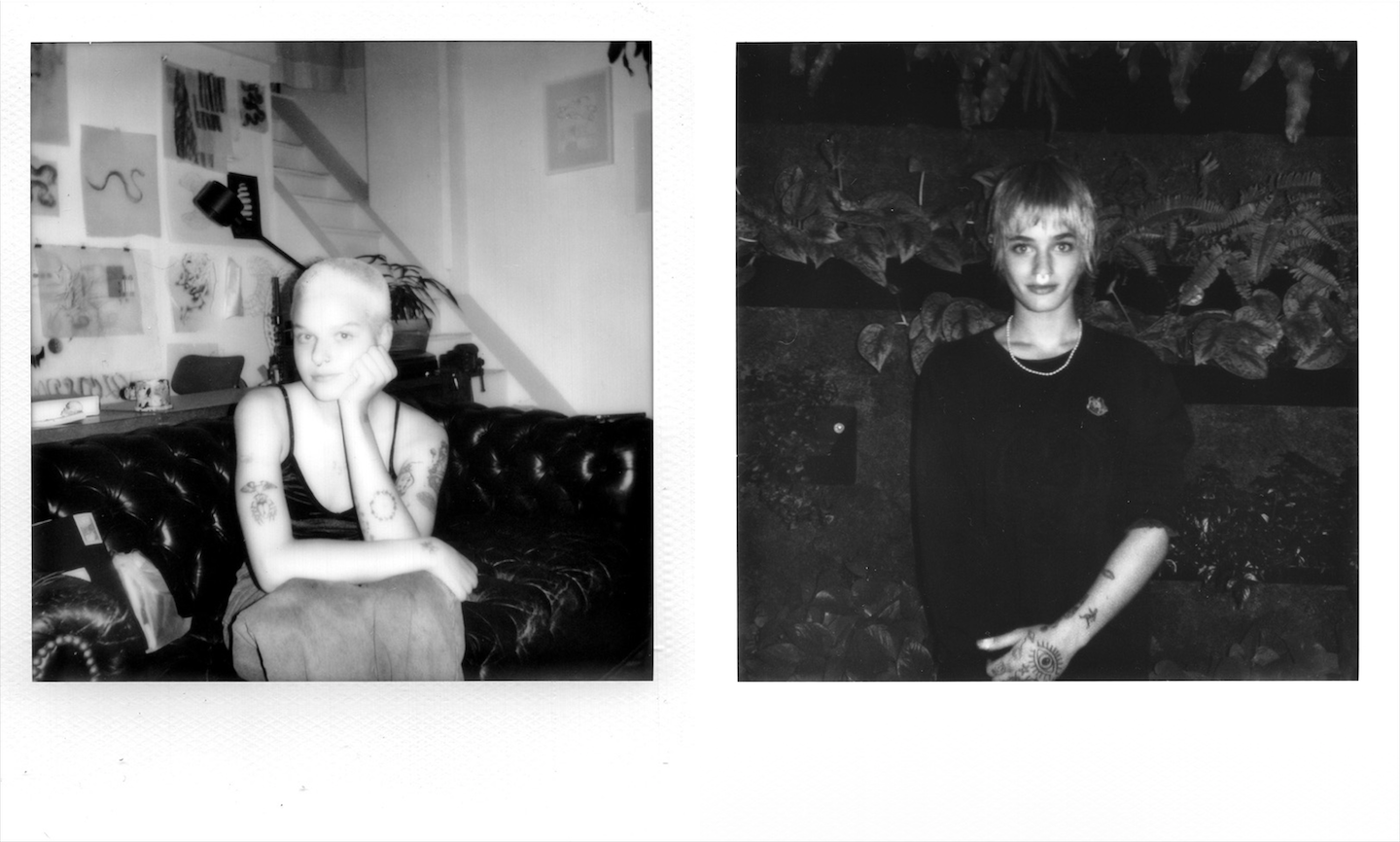 SA: How do tattoos serve as a form of self-expression for you?

EM: In general, I think that my art has been a reflection of myself. With tattoos, it’s not only for me. It takes that selfishness out of the art. You have to start thinking about other people and creating things with your audience in mind, not just what is geared toward your likes.

HD: I like being tattooed, the look is really cool. But also, I do it so that when clients come to me, they see that I’m tattooed and that I’ve experienced the pain that they’re going through. It’s definitely a form of self-expression as well. I identify with all the art in my body because they’re a part of me now.

SA: How do you personally decide what you want to get tattooed?

PS: I’ll find an artist’s flash sheet and just get it the day of, but I’ll figure out who I am going to be tattooed by before.

AG: I was obsessed with certain tattoo artists so I went for particular people, and it just so happened that a lot of the work that those people do relates to mortality. I definitely express myself through the more morose, mortal imagery. 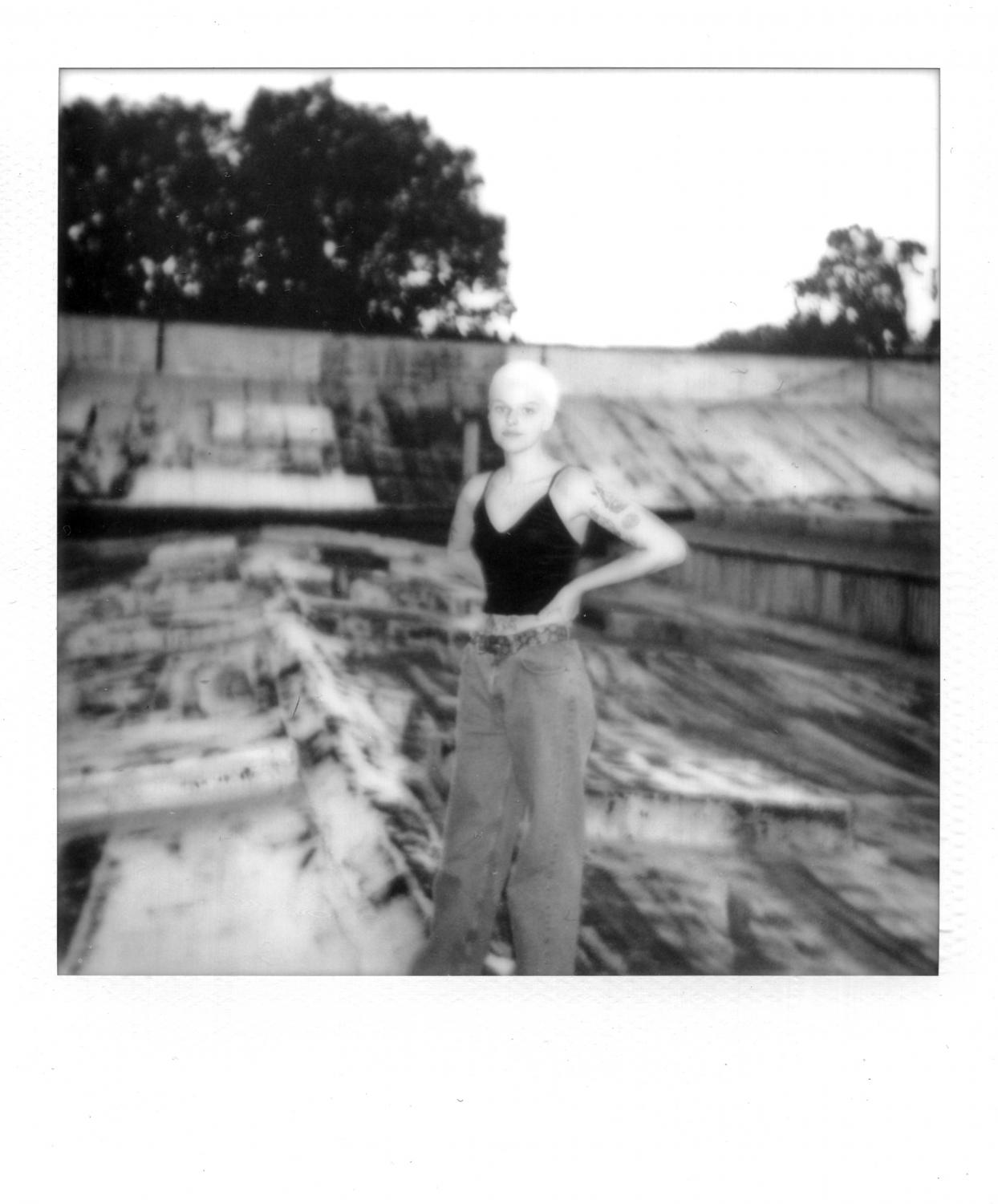 SA: Do you have one tattoo that particularly stands out in its closeness to you as a person?

EM: I have hydrangeas on my upper arm. My grandfather passed away when I was in sixth grade and he was my best friend. He taught me most things that I know and he had the most beautiful flowers in his garden. So when I would go visit my family, he would make me a bouquet from his garden.

PS: The first tattoo I did, because it reminds me of that time in my life and how far I have come since then.

HD: I have two tattoos from an ex-boyfriend and my current boyfriend that were the first tattoos that they ever did. I was able to walk them through it and teach them how to tattoo. Even if someone isn’t part of my life anymore, the fact that they were able to put something on my body is something I’ll always remember.

AG: I was lucky to be getting tattooed a lot in the 2000s, when a lot of special artists were more available. This artist, who just got back into tattooing a couple years ago, tattooed “anguish” across my throat. He’s someone who opened some doors for me to learn more about what I love.