A personal narrative about turning people-watching into story-telling. 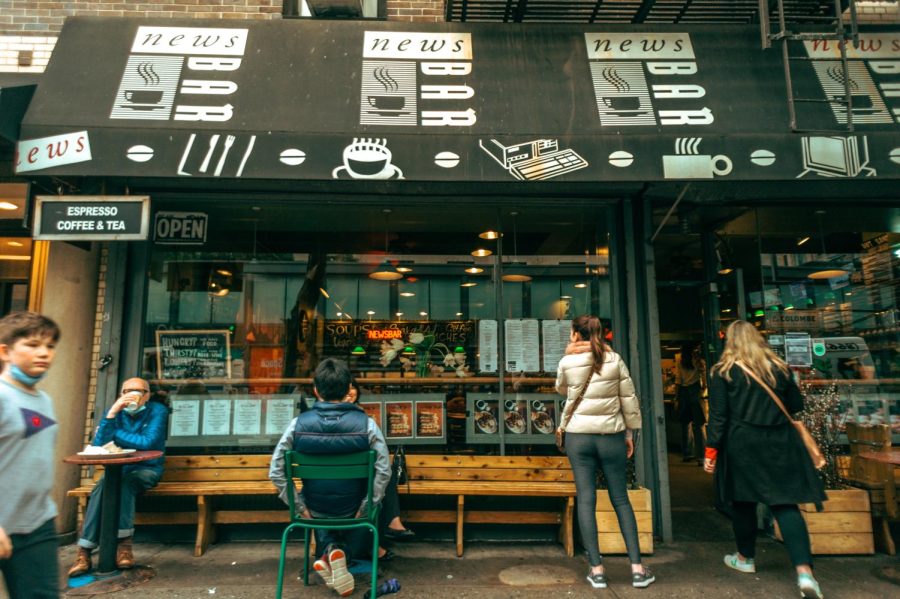 Newsbar is a coffee shop located at 107 University Place. “People-telling” is more than just procrastination — it is a pastime, a guilty pleasure and an avenue for imagination. (Staff Photo by Sam Tu)

It’s not mine, but I claim it anyway — the small, wooden half-bench-half-chair table tucked in the far corner of Newsbar on University Place.

I’m a born-and-raised Californian. Staking my claim like I’m a miner in the Gold Rush comes naturally to me.

If a professor or my mother asks, I go to my unofficially owned table to do homework and nothing else. My only indulgence is the $7 chai and the discounted day-old baked good I get at the counter.

Writing essays and struggling to finish physics homework that I will never fully grasp is my primary focus, but I’m human. My thoughts float away from the task at hand and my eyes follow suit, drifting from the Google Doc to the cafe’s other patrons. It’s my guilty pleasure, almost a vice, rather than the pricey lattes I shouldn’t buy and the cranberry muffin that I find dangerously delicious: people-watching.

People-watching has been a whimsical — albeit slightly invasive — habit I’ve had since I still had my baby teeth and believed in Santa Claus. Disneyland, the happiest place on Earth that I used to frequent, like many other Southern Californians, was the prime location for observations.

There were families in matching shirts, young kids messily devouring a Mickey Mouse-shaped ice cream sandwich and a newlywed couple snuggled up watching the fireworks. But as I grew and changed, so did the parameters of my people-watching endeavors. Just observing the clothes, the gait, the neon-colored hair or the tattooed arm was no longer enough. I had to know the stories behind it all, even if I needed to make them up myself. So now I refer to it as people-telling.

Newsbar is no Disneyland, but it’s a magical place in its own right. With a window looking out on University Place and a dining room underscored by smooth jazz, there is no shortage of eye-catching people.

When I used to people-watch, I merely saw. I would have only seen a woman wearing green pants walk by with a to-go cup of coffee in hand. She would keep walking, and I would stay seated behind the cafe’s window, and that would be the end of it.

When I people-tell, I create a story. Purely fictional — guesswork, really, based on my observations. The only kind of science I’ve found myself to be good at. The woman is wearing green pants because it reminds her of fresh-cut grass in the summer. Inside that to-go cup is not coffee but freshly made matcha that is almost a perfect match to the green hue of her pants. She grew up in the South where the early morning heat carried the scent of Bermuda grass through her open window, and it followed her all the way north.

A man walks by with a briefcase a few minutes later. He seems to be about 30 years old. Maybe he’s heading to his big corner office on Wall Street. Maybe he’s a very young NYU professor.

I decided that the briefcase isn’t just a briefcase, though. It was a graduation gift intended to be carried on the first day of his first big-kid job. He did carry it that day, and he’s carried it every day since. Inside the briefcase, amid the clusters of papers and manila folders, is a granola bar, because his mom always told him to bring a snack. “A man can’t think on an empty stomach,” she’d told him.

The chiming of laughter to my left takes me off of the street and back into the coffee shop. A group of women sit beside me, crowded around a wooden table cluttered with coffee-stained mugs. They look to be in their sixties, maybe seventies, based on the graying hair and creases in their faces from years of smiling in the sun. Likely, they’re a group of friends meeting for lunch. They’re part of a book club they started in the ’60s while their husbands were overseas in Vietnam.

The book club survived even after wayward spouses returned with duffle bags slung over their shoulders, their sun-tanned cheeks waiting for a kiss from their love. The group of women continued meeting once every two weeks, now that their homes were fuller and regular duty had begun again. A few years ticked by, and most of the book club meetings were spent ogling over newborn babies. It became less about analyzing “Jane Eyre” and Maya Angelou and more about the best way to soothe colicky babies. It was still insightful nonetheless. They kept meeting as children grew and pencil markings moved upward on the doorframe. The kids were at school now, the ladies free to meet on weekday mornings. Life swirled around them and the Earth kept threatening to tilt off its axis, but their living rooms remained a safe haven.

They meet once a month now, here in the 21st century. They squint their eyes to see pictures of each other’s grandchildren, the children of sons and daughters they watched grow up themselves.

Odds are, every detail I crafted was wrong — not even close, probably. And the odds are I’ll never speak to those people to hear the real stories and how wonderfully wrong I was. I likely will never know what names they answer to.

I keep my stories to myself, and each person walks off, none the wiser to the roles they played in my imagination.