Eating around the world

Sophomore Edoardo Marras is embarking on a journey to try cuisines from every country in the world. 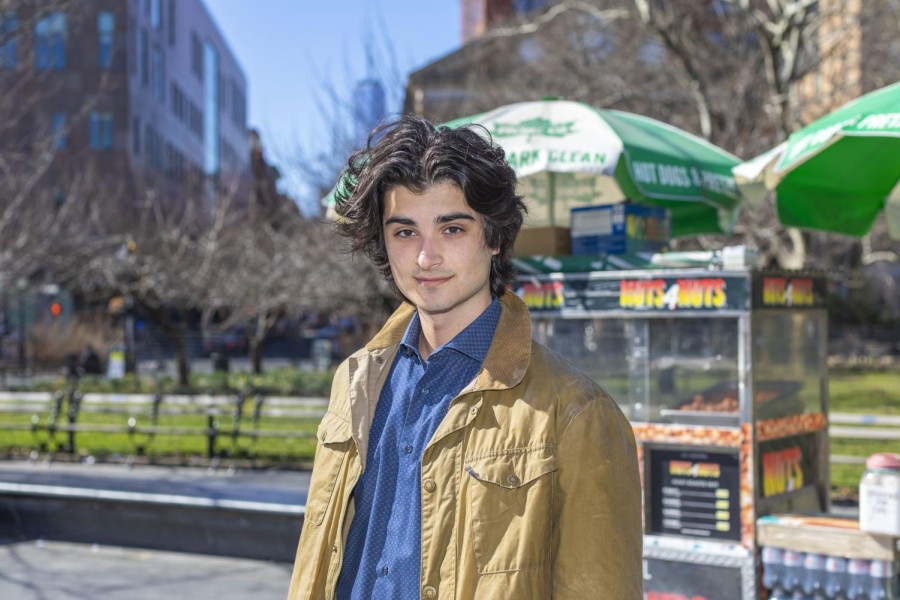 Edoardo Marras is a NYU sophomore. (Photo by Joshua Becker)

There are almost 200 countries in the world, and sophomore Edoardo Marras is determined to try food from each one.

A benefit of living in a cultural hub like New York City is that it doesn’t require a plane flight to taste foods originally from thousands of miles away. Foods from every corner of the world can be found nearby if you know where to look.

Marras came up with the idea this past summer. Bored at work and freshly equipped with new Microsoft Excel skills, he decided to start a spreadsheet logging all of the international foods he’d eaten.

As he compiled the cuisines he’d already tried, he thought of a future in which a festival in New York could gather foods from all over the world in one convenient place. That inspired him to do the work for this hypothetical food festival himself, and he began listing every country and researching a corresponding eatery. He figured that he would also need to try all of these places himself prior to including them in a food festival attended by others.

“First I’m going to try the food from every single country within the city,” Marras said. “By the time I’m done with that, I’ll hopefully be old enough and knowledgeable enough to do something with all the places I’ve tried.”

Marros was born in Milan, Italy, where he lived until 10 years ago. He learned to speak English within six months of relocating to New York City, but says it took a good three years to lose his accent — though he believes it slips out occasionally. Just recently, he received his U.S. citizenship after a decade of being a resident.

Despite having eaten true Italian food the majority of his life, Marros still included it on his spreadsheet. Not everyone would be able to eat food in its country of origin as he could, so he sought out a restaurant offering authentic Italian cuisine in the city. For anyone wondering, he declared Ribalta in Union Square as one of the best pizza spots in the city.

When it comes to his selection process, Marras prioritizes authenticity. He seeks out traditional dishes from the most authentic restaurants in his research. Marras has made the occasional change based on other people’s preferences, especially the experts — people from the country itself.

“I try to consult people from the countries as much as possible instead of online comments,” Marras said. “I like to think that the more authentic choice is the better choice. I don’t want the food to be Americanized or shaped by Yelp.”

The first cuisine he tried for this project — besides Italian and American — was from the African country of Chad. A week after he began his list, Marras’ mother mentioned the Green Garden Buffet, a restaurant run by a Chadian woman and former Peace Corps public health advocate Tamika Gabaroum.

Marras got a few friends together to try it out. The restaurant features homestyle cooking and food paid for by the pound, and Marras said that just one dish can feed two for $20.

“It felt like sitting down in a Grandma’s kitchen,” Marras said. “It’s served to you as if you were a family member.”

Unfortunately, Green Garden Buffet closed in September, though a sign taped to the door says that Gabaroum is still available for private catering.

Marras’ spreadsheet, titled Every Cuisine NYC and linked in his Instagram bio, has countries listed with the corresponding restaurant and its location. Next to that, he provides his ratings, which are based on three different criteria and add up to a total of 10 points — price counts for two points and atmosphere and food for four points each.

There are a few countries excluded, mainly those with “no specific cuisines, like small nations with dishes that are too similar or that don’t have a significant number of citizens,” as Marras explains. However, some cuisines have more than one restaurant listed due to popularity and size — Argentina and China, for example. He also listed regions that have a distinct cuisine from the country at large, like Sardinia, the part of Italy where Marras’ family is from.

He has tried food from 18 countries so far. Like many NYU students, Marras has eaten at Ruby’s, the popular Australian eatery on Third Avenue. He scored it a 7.5/10, and warned that “vegemite is only for the strong,” in his spreadsheet.

Fortunately, Marras is by no means a picky eater and doesn’t shy away from trying unfamiliar foods. He’s tried cow tongue and crickets, yet there is still one food he refuses to eat — peanut butter. So don’t expect to see The Peanut Butter & Co. Sandwich Shop on the spreadsheet any time soon.

His current favorites — Dons Bogam BBQ and Haidilao Hotpot, two Flushing restaurants to which he gave a 9 and an 8.7 respectively and encourages everyone to try for themselves.

He wrote on his spreadsheet that anyone is welcome to message him with a request for a country or with restaurant suggestions.

“It’s cliche to say ‘go outside your comfort zone,’ but a very easy yet reassuring way to do that is with food,” said Marras. “It’s an excellent way to very simply step outside of your comfort zone and do something that you’ve never done before.”