From “Mad Minute” to formulating magic and meaning in math

To NYU mathematics professor Hesam Oveys, teaching is like building a new home. 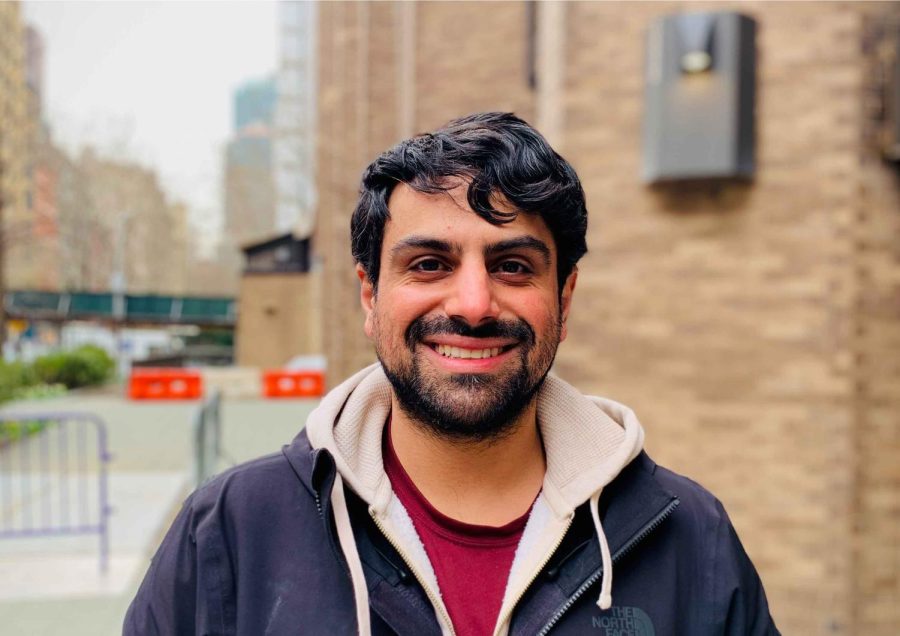 Students trickle into a medium-sized, dimly lit classroom at 194 Mercer St. in Greenwich Village. Some confer with their peers to clarify last-minute doubts about Lagrange’s theorem, while others dissect the area of parabolic graphs and discuss page-length problems.

A man dressed in a navy blue Nike T-shirt and a black track jacket paired with Levi’s jeans enters. A mask covers most of his face, with only thick, arched eyebrows and zestful eyes visible above it and hints of a black beard below it. It’s 10:13 a.m., and he has two minutes until class begins. He walks to the lectern, unzips his jacket, tosses it on the table beside him and logs on to his iPad. The screen before the students comes to life with a ping and a plain white sheet appears. Two minutes are up.

Oveys, 35, is a clinical assistant professor of mathematics at NYU, and the instructor of this Calculus III class. This semester, he’s teaching two sections of the course, as well as two other math classes: Discrete Mathematics and Mathematics for Economics I.

Becoming a professor wasn’t always in the cards for Oveys. But after years of attempting other pursuits, he found his way back to mathematics, a subject that had enthralled him as a kid and an area of study he could see himself sharing with a younger generation.

Born to Iranian immigrants, Oveys grew up in a family rooted in medicine. His parents, both working nurses, had urged him to go even further in the field, leaving Oveys with the impression that a respectable career meant becoming a doctor.

“It’s something you think as a kid, or at least I was raised to believe that if you are smart, if you are intelligent, if you work hard, you should aspire to be a physician,” said Oveys, seated beside his desk adorned with a bottle of hand cream and a lagging computer in his bare-bones, box-shaped office. The room also houses “Introduction to Real Analysis” and “Functions of One Complex Variable,” among other math books.

But a few undergraduate classes at the University of Missouri were all it took for the predetermined path to crumble. Many courses were taken, many were dropped. Neither bioengineering nor chemical engineering seemed to captivate Oveys.

“I took a bioengineering 2000 course. It’s just an introductory course where you talk to industry leaders who come in and give presentations. I remember sitting through one of those and I was like, ‘I don’t like bioengineering,’” Oveys recalled, laughing. “I think I picked it solely because of the medicine aspect.”

When all the pieces in the puzzle seemed to create a picture he wasn’t proud of, Oveys returned to his childhood love for math.

Oveys’s notes are as important to his teaching as lecturing: Solutions are always written in blue, questions in black, rough work in green and mathematical proofs in purple. Important concepts are boxed in red, with portions of them highlighted in yellow. In his class, there is a difference between e.g. and ex. Both stand for “example,” but the former refers to practice questions, while the latter represents potential exam questions. Unlike illegible scribbles on a blackboard that make one’s eyes squint, his notes look like rainbow sprinkles on a lifeless sheet.

“He’s so organized and has his life sorted,” said, Ananya Sanghvi, a CAS sophomore on the math honors track. “When you’re doing a math major, professors make your life miserable. But Prof. Oveys is different.”

Oveys believes he’s picked this approach to teaching from Dixie Grupe, his former AP World History teacher. Then a 10th-grade student, Oveys scored his lowest grade in school on the first history exam: a 60%. After her guidance, Oveys never scored as low as a 60% again and remembers this class as his favorite that year.

“I knew she wanted us to succeed, and similar to that, I want my students to succeed. I want them to know that I am on their side, that I’m not here to put a number on them, a grade on them and move on,” he said in his usual raspy voice. “I feel like professors, they always have this, ‘I am the judge here and you’re this type of student,’ attitude and I don’t want to be that person.”

Office hours are the time when Oveys gets to put a face to a name. He walks around a table answering each students’ questions, giving them undivided attention.

His mentorship doesn’t stop with his students. Pyam Oveys, 21, a graduate student studying mathematics at the University of Missouri and Oveys’s younger brother, intends to become a math professor himself. He finds it reassuring that his elder brother, who has attained success in his career, remains just a call away.

“I often find myself probing for his thoughts on a matter, almost as if to have a second opinion that I value when I’m second-guessing myself,” Pyam Oveys said. He credits his brother for making him a better problem solver by pushing him to come up with his own solutions.

The first seeds of Oveys’s mentorship abilities were sown when he was in graduate school, learning from the best in the field. Michael Taksar, his Ph.D. advisor, helped him steer through every stage of his taxing thesis on volatility-induced financial growth.

He feels Taksar gave him practical advice when he was pursuing mathematical research, which has influenced his teaching today. When Oveys explains a proof with intricate parts, he boxes some portions, draws arrows between others and highlights the rest, all to cement the students’ understanding.

Beginning his career as a graduate instructor, Oveys has spent years teaching different mathematical topics, and believes there is a fine line between teaching and understanding. Anyone can understand calculus, he said, but not everyone can teach it.

“He seems like a lawyer. When he’s explaining a concept, he makes sure every step in the argument is indisputable,” said Matilda Fu, a sophomore studying psychology and philosophy. “Back home, in China, I was the worst math student. My logic and reasoning were all over the place. As you can tell, I don’t like math, but I love it with him. He just makes things make sense.”

Oveys doesn’t dream of a life spent in a sky-scraping, glass-doored building, crunching numbers and being showered with banknotes, or a “white-collar job in a low stress environment,” as he likes to call it. He’s content as long as he’s got a chalk in his hand, a tickling question to solve, and a blackboard to work out the solution on.

“I always enjoyed math. I went to a math camp for two summers in high school. That’s how much I loved it. It was like a full-blown, you’re-immersed-in-math type deal,” Oveys said as he looked back at how his childhood love for math stemmed from elementary school games, including “Around the World” and “Mad Minute,” and has blossomed into what he lives and breathes today. “I was very quick at those games. And math — math just made sense to me.”

Oveys always knew working a 9-to-5 job wouldn’t suit his taste. He compares those jobs to building multiple, similar homes: It’s doing the same task over and over again, he says, except choosing different door knobs. Teaching, on the other hand, is building a new home every time.

“In academia, you are literally learning. You are taking another course. And I feel like I am becoming a better thinker because of it,” Oveys said. “We don’t do the job for the money. Honestly, if the salary was even lower, don’t tell my superiors this, but I would probably still do it.”

Tapping his phone to check for any notifications from Campuswire, an online learning platform where students submit their questions, and scribbling down equations on a notepad, Oveys sits in anticipation of his afternoon class.

With this, Oveys turns to his computer. The bright screen pops up, his eyes light up, and soon enough, his fingers are busy typing away solutions to student questions.