Casey Hall-Landers on disability, dance and the echoes of trauma

Tisch dance senior talks about dancing with disabilities and the culture of injury in athletics. 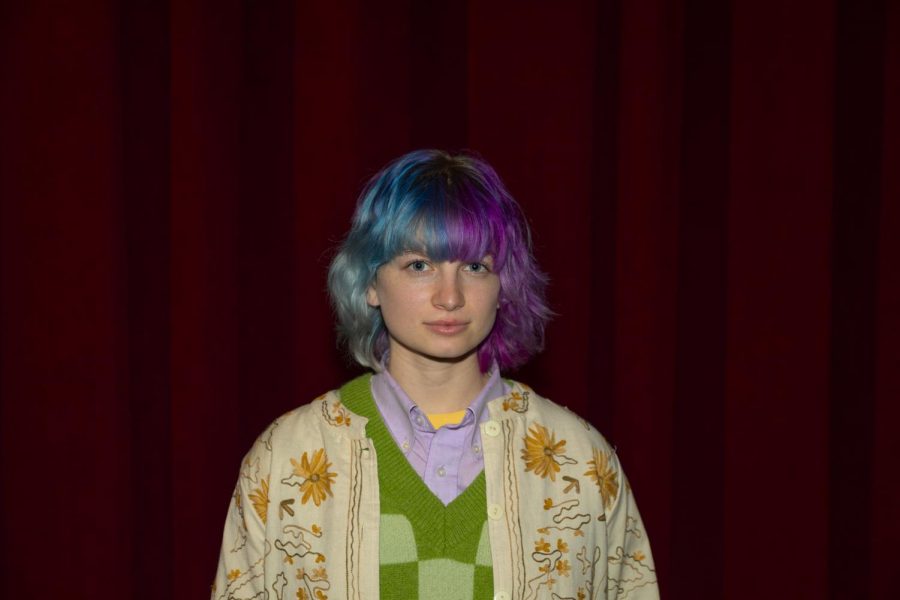 Casey Hall-Landers is a senior in the Tisch dance department. Currently, Hall-Landers leads their own dance class called “Contemporary Somatic Injury Prevention,” and serves as a leader for Access Arts, a non-profit organization which aims to give the public access to artistic spaces. (Photo by Joshua Becker)

Casey Hall-Landers is a hodgepodge of a person — a vision in lilac and soft yellow, short hair split-dyed magenta and powder blue, and black-and-white checkered pants. Sock-clad feet allow them to glide swiftly across the Tisch studio with unrelenting poise.

In their last year studying in the Tisch Department of Dance, Hall-Landers is taking a course called “Pedagogical Inquiry,” in which students create material to teach dance, learn how to lead a class, and instruct a wide range of dancers. As part of this class, Hall-Landers taught their own lesson, “Contemporary Somatic Injury Prevention,” to their fellow students. This lesson was born out of their own experiences with the chronic injury from martial arts and dance that has led them to be disabled at 21.

Hall-Landers’ disability is a result of a culmination of repetitive and intense movements that might not have initially been harmful, but over an extended period of time resulted in a disability that requires medical treatment and accommodations. Their disability requires them to remember to move more mindfully, even for day-to-day activities like walking, writing and sitting. Some days, Hall-Landers is more agile, such as when they remember to give themselves time to rest, warm up, slow down and even scale back on unfavorable movements. These practices, while often neglected by young athletes, are ones that underlie the class they are leading.

“Keep this stacked,” they repeat to the class, placing one hand on the top of their head, the other on their abdomen. “Push off with your back foot, like you’re ice skating.”

The students follow suit, first a group of three and then a pair, and the atmospheric music drones on. Their class is about movement practices that focus less on physical exertion and replicating exact movements and more on honing sensory awareness to identify faulty movement patterns and misalignments. The class is a welcome reprieve from the dancers’ fanatical work schedules that average about 15-20 hours of dance classes per week, plus their own practice outside of class.

“Dancing is when I feel most comfortable in my body, but it’s not dancing how they do it in class,” said Hall-Landers. “It’s the kind that feels good in my body that I make the rules for.”

Hall-Landers has undergone a re-education of movement that is meant to break the cycle of pain, injury and muscle overuse, a culture they said is prevalent in most sports. Their new label as disabled has not only opened the floodgates of Hall-Landers’s artistic and intellectual capabilities, but also harkens back to their childhood.

The San Diego native remembers themself as a hyperactive child, teeming with energy as they lived with undiagnosed attention deficit hyperactive disorder until 2021. From the ages of 6 to 17, they expended this energy by participating in extreme martial arts, or XMA, a free-flowing style of martial arts that incorporates gymnastic moves such as somersaults, flips and other striking acrobatic maneuvers. Their work ethic and rigor, alongside the choreography from XMA, translated to dance, which they began taking around age 11.

“People who know me, they know me as a badass martial arts black belt at 16,” Hall-Landers said. “They know me as Casey with two world titles.”

Hall-Landers was immediately seen as a promising athlete in both activities and was spurred on to practice more and push through pain. They found themselves fully committed to XMA and dance, which left little to no time outside of those circles.

“My social development was definitely hindered because of the amount of time that I was practicing,” Hall-Landers said.

At 16, during a martial arts class they were leading, Hall-Landers broke their right arm during a flip. They recall blacking out right before landing due to not eating enough and practicing extensively earlier in the day — conditions that were allowed to happen by the adults in their sports circles.

“I woke up on the ground, with my arm twisted and mangled behind me,” Hall-Landers said. “My students were sobbing and had to be ushered away. It was this kind of life-or-death moment for me.”

This traumatic experience led them to quit martial arts a year later. They also had previous injuries, some of which resulted from their sensei pulling them out of physical therapy prematurely — a practice which they say is common in sports, especially for injuries that appear harmless initially but worsen when left unaddressed.

But Hall-Landers reached a turning point during another teaching moment when they choreographed a dance for middle schoolers as a teaching assistant.

“The first time I saw them performing on stage, I was like okay, this is it,” Hall-Landers said, “I want to do this for the rest of my life.”

Being accepted into the Tisch dance program was just the next step. But this time, the same rigor demanded by their activities took a greater toll on prior injuries, some of which had never completely healed. The intensive three-year and two-summer Tisch Dance curriculum includes daily classes in ballet and contemporary dance technique. The professors dictate what style of dance students will practice, Hall-Landers explains, and more often than not it’s styles of dance that favor repetitive, sometimes explosive movements.

“I would go to class and dance for a few hours; the next day I would be bedridden,” Hall-Landers said. “I was already used to hiding back pain since I was 13, but I was immobile some days.”

The absences piled up, they said, and despite the program ensuring that dancers have physical therapists available, absences were still frowned upon. After reaching a point where they could no longer participate in classes to the same capacity as other dancers, they registered for accommodations with the Moses Center for Student Accessibility. Nerve damage in their arm doesn’t allow them to type or write for long periods of time, a deformed tailbone means they can’t sit for too long, and chronic back pain has made the use of a cane necessary for standing.

Hall-Landers often uses a lilac-colored cane with a chartreuse mushroom charm dangling from the handle. Seeing it as both an accessory and extension of themself, they notice how it often elicits stares from strangers.

“Having a cane as a visible reference for my disability reminds other people to be considerate,” Hall-Landers said. “When I leave it at home I realize, ‘Oh, they don’t hold the door for me unless I have the cane. Oh, they won’t ask if I need bags.’”

Asking for help has not come easily, and it was not something Hall-Landers was accustomed to as a high-achieving athlete. The culture of sports that Hall-Landers experienced demanded that young athletes push their bodies to the limit in favor of awards and accolades.

Young athletes are particularly susceptible to overuse injuries because of their developing bodies. Exacerbated by improper techniques and toxic performance culture, athletes often enter an ongoing cycle of pain, injury and insufficient rest. Because dancing is simultaneously a sport and a creative medium, disability can be seen as tarnishing the aesthetic of dance. Dancers are encouraged to train extensively in order to perform to the standards of the industry.

In the dance program, Hall-Landers had become the exception from the norm, once again experiencing isolation from their peers as they had to tailor their program to their new normal.

“I feel like I didn’t come out as queer, but I had to come out as disabled,” said Hall-Landers. “I don’t know anyone who is in the same situation as me in the program.”

Hall-Landers believes that there must be others that share their experiences but are not vocal about it due to shame, fear and the normalization of chronic pain. Disability is especially stigmatized in dance programs. Hall-Landers explained that injured dancers either get better, dance through injury or leave the program entirely. They have opted out of these options, though, and decided to create a niche for themselves by dancing in a way that is rehabilitative and preventative of injury.

Through an independent study, Hall-Landers is researching the effects of childhood trauma, both physical and mental, and how it reverberates through adulthood and affects life outcomes. They’re especially interested in how triggers affect individuals neurobiologically. Despite being diagnosed with acute and complex post-traumatic stress disorder last year, they have not slowed down. Hall-Landers also leads a nonprofit arts organization, Access Arts, which works to give the public access to the arts and facilitate collaborations with other artists.

Sofia Gonzalez, also a senior in Tisch Dance, is on the production team of the organization. Having both performed as a dancer and singer, Gonzalez explained that Access Arts gave them the opportunity to perform in an unconventional performance venue, allowing them to engage with the audience in a much more intimate way.

“Access Arts focuses on access and inclusion for all people, people that wouldn’t otherwise be able to see art or a performance and provides opportunities to collaborate with artists that may have never met otherwise,” Gonzalez said.

Hall-Landers’s focus on accessibility and disability is what made them decide to continue dancing at NYU.

“While I do have a disability,” said Hall-Landers, “I’m also just differently abled.”