Tisch student Stella Wunder is TikToking through the entertainment industry

Actor, model, filmmaker and makeup artist Stella Wunder adds influencing to their repertoire with a sudden plunge into the world of TikTok fame. 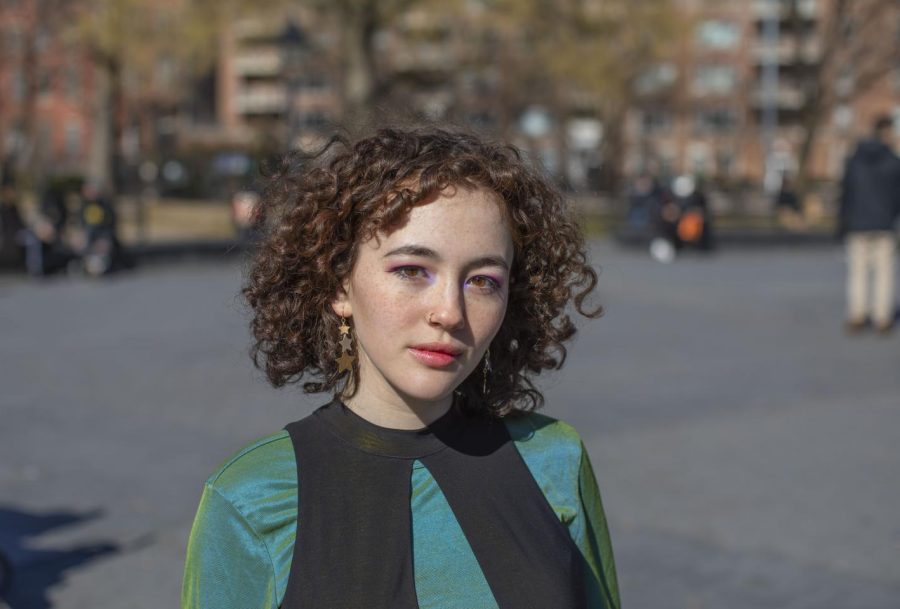 Stella Wunder, an up-and-coming TikTok star, shares their rise to fame and life as an influencer. Wunder is also an actor, musician and Tisch student. (Photo by Joshua Becker)

One scroll through Tisch junior Stella Wunder’s TikTok reveals a vibrant, bubbly microcosm of the life of a young adult pursuing the arts in New York City. Their content ranges from Day in My Lifes that show her decked out in ’50s glam for her gig on “The Marvelous Mrs. Maisel,” makeup tutorials for looks from her favorite movies or simply her reactions to the latest episode of “Euphoria.” In many ways, their content epitomizes what many consider to be the ideal New York creative experience.

Wunder’s TikTok fame began in May 2021, when they and their roommate created an elaborate wall of sticky notes predicting what celebrities would wear to the Met Gala — how they would interpret the theme of America: A Lexicon of Fashion, who would hit the mark, who would miss it completely, and so on. Within 10 hours, Wunder gained around 30,000 followers, and the video has now amassed almost 3 million views.

A few of Wunder’s TikToks had gone viral before, garnering tens of thousands of views, but nothing on the scale of this one.

“It was kind of just like waiting for that opportunity to come, and then once it did, I kind of went full force into it,” Wunder said.

When it comes to going full force into a job like content creation, Wunder has quickly realized that the key is branding. Now, instead of exclusively creating content that appeals to them, Wunder must take into consideration the growth of their brand as a whole.

Many creators continue to push this narrative of personal expression. But the more a creator grows, the more their content inevitably becomes geared toward brands and algorithm boosting, and less toward authenticity. Now, Wunder has found her niche in brand building, a combination of interests that include makeup, fashion and acting. Luckily, it seems to be a niche that her followers and the TikTok algorithm alike react favorably to.

“I realized that … there’s a big community of people who want to see what the life of a working actor is and people who also enjoy content that has to do with makeup and beauty,” Wunder said. “I’m glad that I’ve kind of created this wide range of my interests to promote on TikTok because it’s created opportunities in all different areas of the world.”

One such opportunity for Wunder was an entryway into the filmmaking world, not only in the sense of gaining opportunities to work but in finding a community of creatives with interests similar to their own as well.

Some of Wunder’s most viral TikToks have been documenting her work as a background actor on “The Marvelous Mrs. Maisel.” Like Wunder, TikToker Reece Feldman has also gained a following by giving an inside look to his daily life as a production assistant on the same show. Now, Feldman has transitioned to doing TikTok full time, helping to promote various projects with A-list actors like Dylan O’Brien and Anya Taylor-Joy while still pursuing a career in film.

“There’s nothing that makes me happier than someone discovering a movie because I make a silly video with Anya Taylor-Joy,” Feldman said. “That’s how people get their news and their content these days. But social media was never the focus. It still isn’t the focus, it’s still movies and TV.”

For both Wunder and Feldman, TikTok is not only a passion and a hobby but also a gateway to their greater goals.

“I think TikTok is just helping people understand that there is an artistic world outside of what is just deemed traditional, because you can kind of do and be anything and present that to the world and that can lead to a career,” Wunder said.

The entertainment industry often demands years if not decades of experience before one can receive their “big break.” However, TikTok and social media as a whole provide a shortcut for budding creatives to produce work at the beginning of their careers.

“It makes me feel as though I’m contributing a bit more,” Feldman said. “And people want to hear my ideas, they allow me to be creative on my own terms, which is not something I’d be able to do in the industry for a while, just because that’s how it works.”

Since gaining a following on TikTok, Wunder has simultaneously been working on their own short film, titled “Uncommon Application.” The film, about the pressures of getting into a top university as a high school senior, will be released later this year. Through Instagram and TikTok, they have been able to promote their film to a wider audience.

“It’s not like a previous filmmaking world where the only way you could make a movie was if you had millions of dollars and put it into a theater,” Wunder said. “Now you have this platform that’s accessible at your fingertips that anybody can do it.”

Wunder is quickly discovering the unending pressures of being a micro-influencer — a content creator who is popular enough to gain traction, but has not yet achieved a stable full-time career through social media. Just before talking with me, they had spent all day communicating with a brand interested in their content while also attending classes and keeping up with the responsibilities of being a working actor.

“I had a bad day yesterday and today I was really tired, and so I don’t feel motivated to make content,” Wunder said. “But I still have to, or I don’t and my engagement goes down.”

This brings up the question: How does one take advantage of social media fame without buckling under the pressure? For Wunder, the answer lies in authenticity. They definitely feel the urge to capitalize on every new opportunity that comes their way, but by doing so, they have to find a balance between their success and their enjoyment of the creation process.

Feldman, who has been in the TikTok public eye a little longer than Wunder, has alleviated some of the pressure of the influencer world by sticking to producing content about what he loves most — film. For many content creators, the struggle for authenticity is dictated by a lack of decisive branding. When your brand is synonymous with you as a creator and the things you care about creating, the pressure to fulfill collaborative or monetary responsibilities becomes significantly less stifling.

“For me, working with brands actually helps me,” Feldman said. “It’s a really nice symbiotic relationship where they’re allowing me to do something that I love. And in return, I’m able to make a video that helps them.”

In Wunder’s case, there is still a sense of uncertainty. Content creation demands a certain confidence in how exactly the creator wants to be viewed, and for a 20-year-old college student still exploring their options, this can be a daunting task.

“I mean, honestly, it’s been going in so many different directions, I don’t really totally know,” Wunder said.

For now, Wunder’s account reflects this chaotic yet driven approach. Between their various makeup tutorials and trips to Brooklyn for fittings, Wunder still makes time to answer questions from her followers. Wunder’s candid portrayal of what it is like to grapple with success and failure in New York City is what initially drew in her following, and it’s what keeps them coming back.

“I’ve talked about how this is grueling, sometimes it’s exhausting, it’s hard,” Wunder said. “And I think I’m never really going to compromise that.”