The past is at the forefront in this new play by Tisch Dramatic Writing professor Sofia Alvarez. 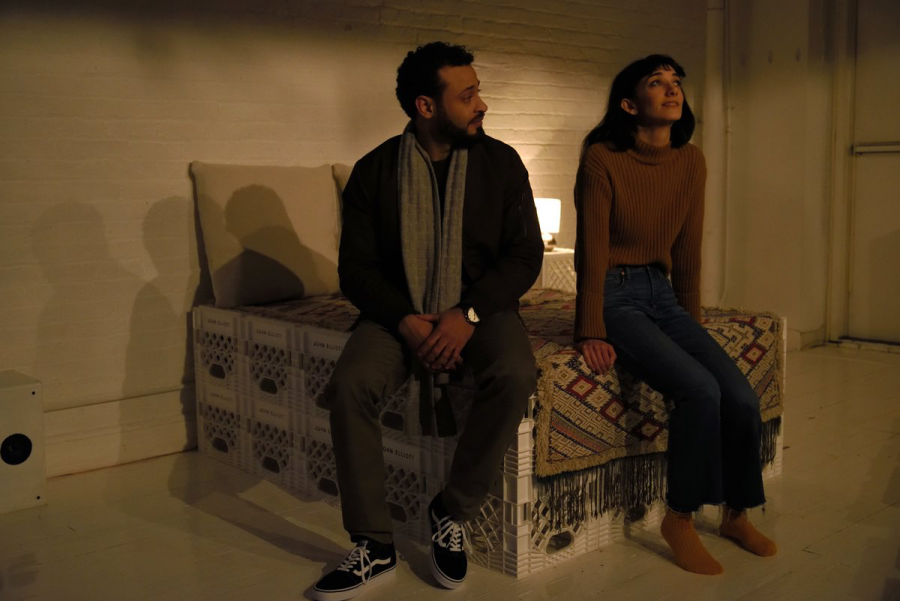 Nylon is a polymer plastic. It’s a long and durable molecule notable for its ability to hold things together, used in products like ropes, stockings and parachutes. In the new play “NYLON,” currently running at Theaterlab on 36th Street in Midtown, the quandary emerges: what are the ties that bind us, and are they strong enough to weather life’s challenges?

The first act is solely concerned with Anna (Sheila Vand), the play’s practical but capricious orbital center, and her ex-boyfriend Matthew (Cesar J. Rosado) as they meet for the first time in four years. As they talk, first in a coffee shop and then her hotel room, details of their past together and their present apart emerge. Anna lives in London now but Matthew’s still in New York, where Anna’s visiting for a work conference. She’s married and works at a magazine; formerly a musician, he’s given up performing to start a landscaping business.

As Matthew and Anna warm to each other, the audience warms to the play. Their intimacy is rekindled in a matchbox-sized theater, with an audience close enough to the stage that tripping performers is a real concern. But past missteps, lingering unhappiness, regrets and remorse quickly come to the surface. In this intimate setting, feelings run particularly raw.

“NYLON” makes frequent use of something like the opposite of dramatic irony. At all times, each character is operating with motives and interests we are unaware of until, gradually, the traumas, decisions and mistakes of the past are revealed and reassessed. The play is written by NYU Dramatic Writing professor Sofia Alvarez and it’s the first work produced by her new venture, the Blockchain Theater Project. It requires the audience to digest two narratives simultaneously: the events playing out in front of us, and the characters’ intertwined lifetimes of baggage.

At one point, Colin, Anna’s strait-laced husband (Brian Miskell) asks her, “How many boulders are gonna fall on my head today?” Other times, the story’s unrelenting turbulence does feel overwhelming, with the frequency and abruptness of plot revelations tiptoeing the line between fluid and clunky. In the midst of this, it can be difficult to grasp where the story is heading or to trust that the direction won’t pivot within minutes. Yet, by the play’s conclusion, the oscillating characters and story weave themselves into a charged and emotionally complex work.

Miskell’s is one of the show’s strongest performances. The friction of his dweebish pragmatism rubbing against Rosado’s extroverted cool makes for a few of the play’s most enjoyable scenes. The dialogue is personal and informal, the jokes too in self-awareness to originate among anyone but millennials.

Directed by Knud Adams, the actors maneuver in a sparsely furnished white space that forces the audience’s attention to the actors. This production has no superfluities: the few props present, mainly beverages that parallel the fluctuating tone and seriousness of the scenes, loudly proclaim themselves in the empty set. Accompanying the action is original music by Anand Wilder of the band Yeasayer. The production makes thrifty use of sound, largely limiting it to transitions between scenes. The score is varied and versatile but still feels cohesive. At times, punchy guitars evoke a hip Brooklyn coffee shop, while at others, stripped down holiday numbers point to a desolate Christmas.

Much of the success of “NYLON” hinges on Rosado and Vand selling their romance and the potency with which they can tell their own stories. Both give admirable performances, visibly aching for a chance to replay their unfortunate shared past.

In this play, the aphorism that you can’t know someone until you’ve seen them at their worst proves itself many times over. Anna in particular is challenged and her facade of practicality is quickly peeled away. But despite all this pain, the beauty of “NYLON” appears in the decisions made in the shadow of looming trauma.

A version of this article appears in the Monday, March 11, 2019, print edition. Email Dante Sacco at [email protected]