The Violets experienced their second loss of the season after going 2-1 in the University Athletic Association Round Robin in St. Louis, Missouri. 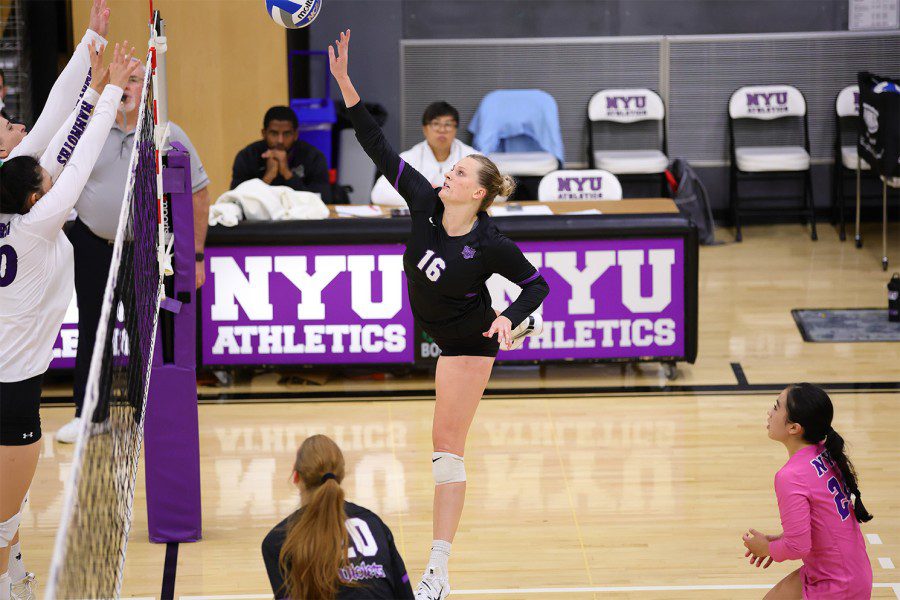 The No. 6-ranked NYU women’s volleyball team was upset by the No. 20 Washington University in St. Louis Bears after a classic five-set match on Saturday, Sept. 17. The score was 2-2 after the first four sets, forcing the match into a fifth set to 15 points. The game was part of the University Athletic Association Round Robin hosted at WashU’s campus.

The thrilling match between these two highly-ranked teams was an incredible three-hour affair. Three out of the five sets were decided within two points, including an incredible 35-33 third set.

This is the Violets’ second defeat of the season, having only previously lost to No. 2 Claremont-Mudd-Scripps on Sept. 3.

The game started with a 25-13 first-set win for NYU. This relatively predictable first set did not adequately set the scene for the game that was to come.

After a 25-18 second-set victory for the Bears, an extraordinary third set began. NYU started the set by getting off to a 4-1 lead, thanks to senior Gabriella Spaethling with three kills. This would be the biggest lead of the set for either team.

After a constant back and forth, with neither team being able to pull away from the other, the set was 24-23 for WashU. This is when senior outside hitter Haley Holz took over. She tied the set with a kill, sending the match to overtime, in which she hit four kills. No other player had more than two.

With Holz’s incredible performance in overtime, the Violets seemed destined to win. They only needed to win one more set, and they were the favorites — but WashU had other plans.

Off the back of 17 total kills from fifth-year senior Michaela Bach, the WashU Bears managed to come back and win back-to-back sets, as well as the game.

It was an amazing performance by Holz, with her 23 kills not just being a game high, but also a season high for NYU. She continues her incredible season with an average of a whopping 3.93 kills per set, ranking No. 32 in the nation.

For the WashU Bears, first-year setter Sam Buckley had a real breakout game, with an absurd 51 assists, ranking toward the top of most assists in a single game by a player on any team this season.

The Violets went on to turn around their weekend after this defeat, winning their remaining two games by a combined score of 6-1.

First, they went on to sweep Brandeis University on the second leg of Saturday’s double-header.

Spaethling impressed in this game, with an amazing 20 kills, averaging out to a whopping 6.7 kills per set.

In the second game, a 3-1 defeat of Carnegie Mellon University, senior setter Nicole Dao led the game with 20 assists, while Holz once again led the game in kills with 14.

NYU came out having won two of its games in convincing fashion. An epic five-set loss after being up 2-1 is a tough pill to swallow. While the upset may have been a game-changer for the Violets’ opponents, it turned an otherwise great tournament into a squarely bittersweet one.