Following a historic individual season culminating in a sixth-place finish in the 165-pound weight class of the NCAA Division III Championships, Cooper Pontelandolfo reflects on the strength of his team and the importance of resiliency. 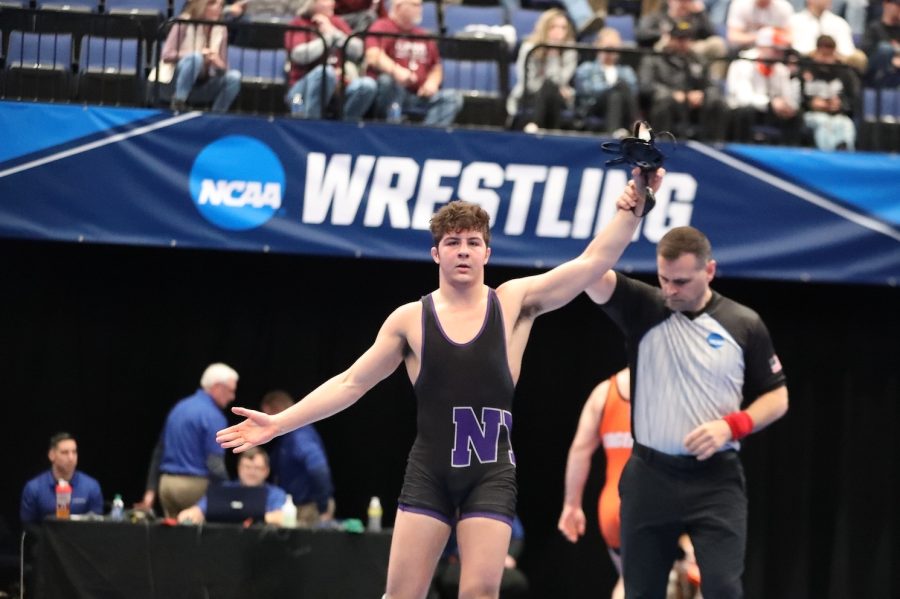 The referee signals Cooper Pontelandolfo as the winner of a match against Austin Lamb during the NCAA wrestling championships. Pontelandolfo finished sixth in the 165-pound bracket. (Image courtesy of NYU Athletics)

While wrestling is a team sport, its athletes compete individually. It creates a nuanced dynamic that differs from the traditional image of a team sport, but that still necessitates a strong team bond.

As the University Athletic Association Rookie of the Year and the second first-year NCAA All-American in program history, Pontelandolfo recognized the impact of his teammates on his strong showing at the NCAA Northeast Regionals.

“The extra support meant a lot,” Pontelandolfo said. “It was cool to see the rest of the team drive four hours just to cheer us on. It definitely added extra energy.”

Pontelandolfo was one of four Violets who qualified for the NCAA Championships and just the third freshman in program history to accomplish this feat. His success is even more remarkable given the adversity the team faced at the beginning of the season. COVID-19 limitations obstructed the team’s ability to gather and practice on campus.

This resulted in a regular commute across state lines to Hoboken, New Jersey – a stark contrast to what would usually be a quick walk to Palladium Athletic Facility.

Pontelandolfo heads into next season with hopes of restriction-free training to build on his All-American first-year campaign.

When asked about his mindset and goals moving forward, Pontelandolfo responded, “try and go and do the same thing, just focusing on fine-tuning technique.”

“It’s hard not to go into next season with a bit of extra confidence though,” he chuckled.