Powerful offense and clean pitching yielded five wins in the Sunshine State for the Violets, who have now won their last nine games. 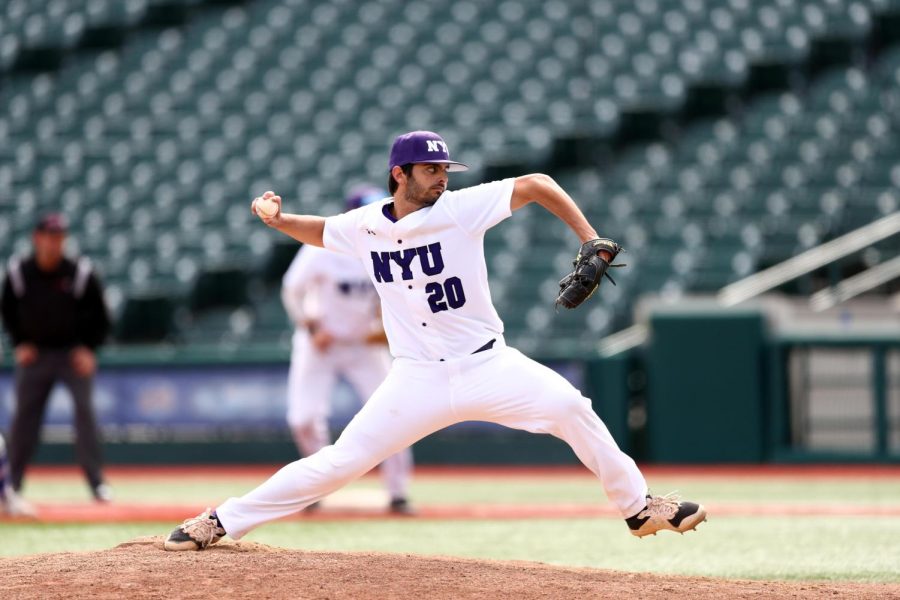 NYU Violets baseball returned undefeated from a five-game spring break road trip to Florida for a perfect 9-0 start to the season.

Their trip started in Bradenton, Florida, with a doubleheader against Thomas College on Sunday, March 13. Reminiscent of the previous week’s sweep of John Jay College of Criminal Justice, the Violets scored 24 runs in two games — a 6-1 win in game one and an 18-3 win in game two.

The Violets’ offensive dominance was backed up by stellar pitching. In game one, junior Tyler Judge struck out six batters and didn’t allow an earned run over a five-inning start. Judge was relieved by junior Ashwin Chona for the final two innings, both scoreless. A pair of triples in successive innings, first from shortstop Zane Baker in the fourth and outfielder Alex VanLandingham in the fifth, drove in three of six total runs.

NYU’s offensive firepower was on display in game two. After a 1-1 tie through the first two innings, the Violets scored 10 unanswered runs in the next five innings, including their first home run of the season — sophomore Cam Dunn’s solo homer in the sixth inning. For good measure, the offense added seven more runs to close out the win.

Senior John Gassler allowed a lone hit and no earned runs over the first six innings. Both teams traded runs back and forth in the late innings. Clutch hitting from senior Grant Berman helped NYU maintain its lead — Berman drove in three runs and scored two runs in his final three plate appearances of the game. Sophomore Jack Hassett came in from the bullpen to end Thomas College’s late game surge for an 11-6 Violets victory.

The Violet’s final two games of their Florida trip were markedly more competitive than earlier results from the season.

The team first returned to Bradenton for a March 16 matchup against Utica University. A solo home run from Nick Argenziano gave NYU an early lead, but Utica retook the lead after a three-run third inning. With the weather threatening to end the game early, the Violets entered the fifth inning with a greater emphasis.

Berman opened the inning with a solo home run to tie the game. Plate discipline and shrewd baserunning allowed the Violets to retake the lead, as junior Connor Roggero exploited a Utica pick-off attempt and stole home. Lightning and thunder arrived shortly after to bring the game to a close and preserve NYU’s perfect record.

The week concluded in Auburndale against Bowdoin College. Chona made his debut as a starting pitcher, allowing only one earned run in seven innings. NYU’s offense continued to be productive, capitalizing on the Bowdoin defensive miscues. Once again, a late-game rally threatened the NYU lead. Ultimately, Judge made a relief appearance, shutting down the final five Bowdoin batters.

“Honestly, it was a great team effort the whole week,” Argenziano said. “We had to find different ways to win all week, and early in the season it was promising to see the team adjust and execute properly enough to lead us to five wins down in Florida.”

NYU baseball returned home to play a twin bill against Lehman College on March 25 resulting in a 36-run sweep across both games.

Game one started with Hassett retiring the side. In the bottom half of the first inning, the Violets managed to score 14 runs on only four hits. Dunn brought in two of those runs on a triple, and Ryan Carr brought in an additional two on a home run.

Lehman returned five runs in the top of the second, primarily due to six batters reaching base on walks or hit-by-pitch. They never got another at-bat because the Violets’ eight runs in the bottom half enacted the mercy rule. Berman and Baker both recorded two-run home runs, and Dunn brought in an additional three with his second triple of the game.

Judge started game two by retiring the side, and the Violet’s scored five in the bottom half. Roggero had a lead-off triple, and Dunn and junior Russell Burton brought in two runs each.

NYU reached double digits in the second inning. Argenziano had a solo home-run to left while Baker and Roggero both recorded RBI doubles. Another run in the 4th brought in by Conklin made the score 12-0 which the Violets held until the 5th inning where the mercy-ruled ended the game.

“I think it’s important to play the game the right way whether it’s 24-5 or 0-0,” Berman said. “We focused on being focused on every pitch, from first pitch until last.”

The Violets will travel to St. Louis to play a four game series with Washington University in St. Louis on Friday, March 25.