After a regular season that netted multiple University Athletic Association honors, the NYU Women’s Basketball freshman guard has carried this momentum into a promising title run. 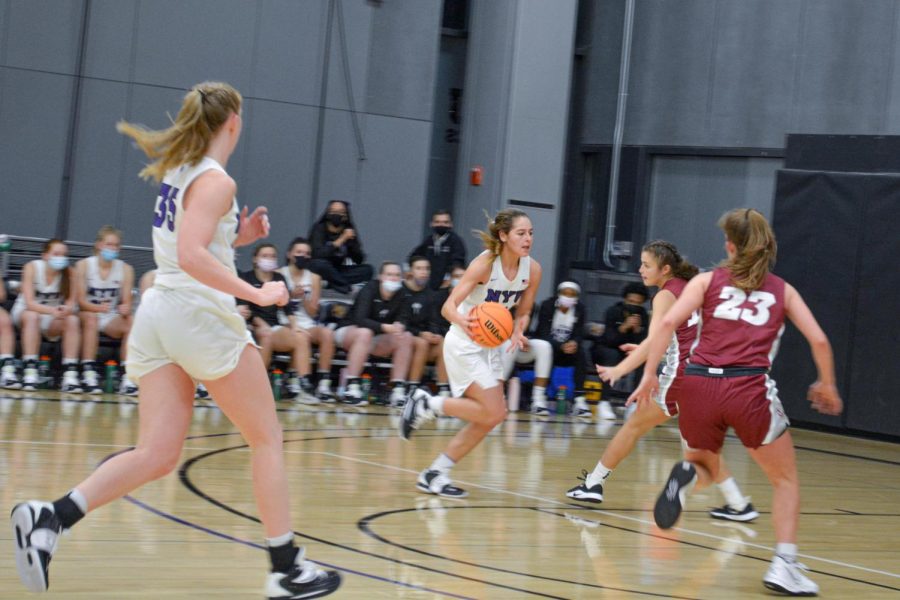 The NYU Women's Basketball team is advancing to the third round of the NCAA Division III Tournament. WSN sat down with the University Athletic Association Rookie of the Year, first-year Belle Pellecchia (4) to discuss this season’s awards, tournament hopes and her meeting with professional basketball player, Sue Bird. (Staff Photo by Mitesh Shrestha)

The NYU women’s basketball team advanced to the third round of the NCAA Division III tournament after securing double digit wins over Washington and Lee University and Bates College this past weekend. The Violets’ remarkably talented roster includes Belle Pellecchia, the UAA Rookie of the Year and UAA Defensive Player of the Year. Twelve-time WNBA All-Star Sue Bird attended the Violets’ Saturday game and talked to the team post-game. The freshman guard shared what the team means to her and what the meeting with Bird meant to the team as the Violets head into Friday’s game against the University of Scranton.

WSN: How did you feel going into this weekend? How do you think that energy will continue or change as you head into the round of 16?

Belle Pellecchia: Personally, I was definitely a little nervous, but our entire team was just extremely excited for the opportunity. After winning the two games I think we realized how much our team deserves to be here in this moment. We’re just as good as any other team, so I think we’ll just take that energy and momentum into the next games. Obviously, there’s going to be some nerves, but really I just think it’s all excitement.

WSN: Earlier in the week, you were awarded UAA Rookie of the Year. For you personally, how did this recognition change your own mentality going into the games, if it did at all?

BP: I wouldn’t say it changed my mentality going into the game. My mentality is always controllable — do what you’re good at, play defense. I’ve been working towards that for a while. I’ve just tried to be as impactful on the team as I could, and I really wouldn’t have been able to do it without my teammates. But yeah, I was super happy when that came out. I was also really happy for my teammates who were also recognized. I think, all around, it shows how talented we are as a group and how well we work together.

WSN: In regard to team sentiment, did you guys have a team mission or phrase you referred to as a constant throughout the season or in the face of any difficulties or obstacles?

BP: I would say we have two words that we would go back to a lot. And one of them has to do with COVID-19 and how the entire team had to take the year off and couldn’t practice or be together in a basketball setting. So with that, we always resort back to “grateful.” Being grateful to be here at this moment, to actually have a season and be able to play together on the court. Always grateful to put the jersey back on. “Relentless” is also another one we came back to a lot. Always persistent, determined, not letting any obstacles get you down.

WSN: One of the best WNBA players in history, Sue Bird, was at your game against Bates College on Saturday. What was your initial reaction when you saw her? How did having her talk to you in the locker room after the game feel, and what impact will it have going into the next game?

BP: I noticed where she was when I was sitting on the bench in the fourth quarter, and it was one of my teammates who was like, “Oh my god, oh my god, Sue Bird is here.” I finally saw her and thought, “That’s crazy… the fact that she’s here watching us means we’re doing something right,” was my immediate reaction. She came here to watch us play — she felt the need to not just watch online but actually come to our game. I was really grateful and impressed by us and proud of us. When she talked to us, she came in after the game and talked a lot about how much energy and how much passion she can see that we all have for the game and for each other, which I also thought spoke volumes about the team we have — everyone’s super selfless and just wants to support each other. The fact that she noticed that — someone who is so successful for women in sports and basketball in general — that’s just like super cool to have someone at that caliber notice that about our team.