On Oct. 6, the Earl Monroe New Renaissance Basketball School formally celebrated its opening with a ribbon cutting ceremony, marking the culmination of a yearslong mission to provide underserved New York City students a new and unique avenue to succeed within the sport they love. 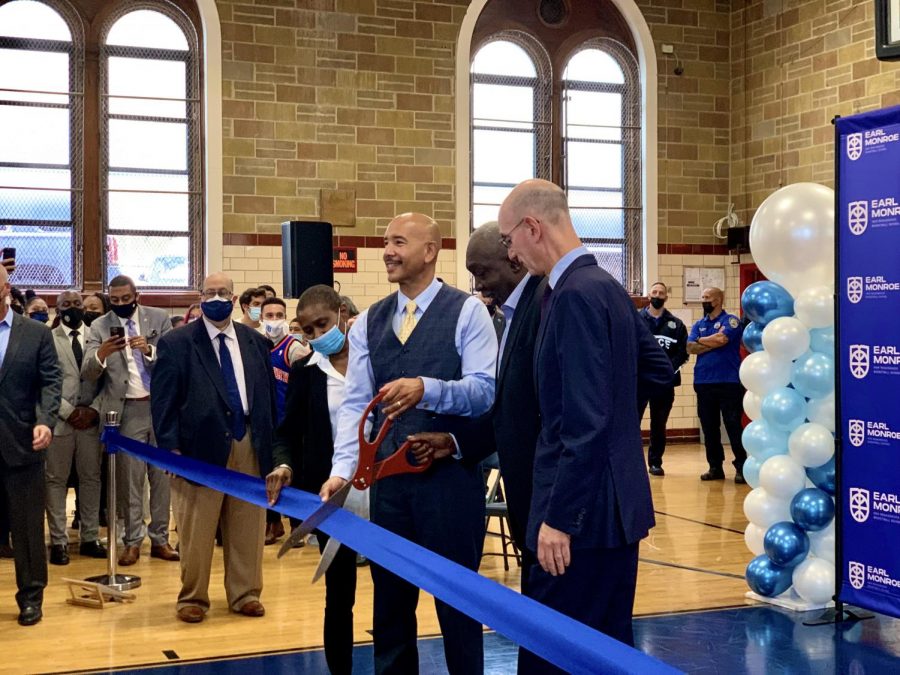 On Oct. 6, the Earl Monroe New Renaissance Basketball School celebrated its opening with a ribbon-cutting ceremony. The school is the first specialized high school in the nation that dedicates itself to preparing its students for different career paths in basketball. (Staff Photo by Mitesh Shrestha)

The star-studded guest list of NBA commissioner Adam Silver, New York Knicks president Leon Rose, NBA Players Association executive director Michele Roberts and a smattering of former NBA greats did not divert the attention of onlookers at the new Earl Monroe New Renaissance Basketball School from the stream of students entering the gymnasium. Adorned in pristine white polos, they settled into the rows of seats in the middle of the gym amid the clicks of cameras and murmurs from the audience.

The pageantry surrounding the ribbon-cutting ceremony celebrated the 124 students that made up the initial freshman class for the EMNRBS. Like its namesake, trailblazing Naismith Memorial Basketball Hall of Fame inductee Earl Monroe, the school is innovative in its own right. The school represents the first specialized high school in the nation dedicated to preparing its students in the different career paths that exist in basketball. After completing the general education course, students have the opportunity to major in fields like law, design, business, broadcast journalism and kinesiology. The school’s curriculum emphasizes field experience, as each student is matched with an individual mentor and an internship related to their interests.

The ceremony was an emotional affair. It represented a culmination of an arduous eight-year-long campaign to realize Monroe’s and founder Dan Klores’ dream. The idea started with Klores, who saw an opportunity to connect new generations to a sport that was integral to his life.

“I’m a basketball guy, [I’ve] written about the game, played the game, coached the game, made movies about the game, the game is my safety net,” Klores said. “Look at what the game can give you: You can take these skills and transfer them to everything. That’s the dream, but who’s going to help you?”

Initially connected by Silver two decades ago, Monroe and Klores developed a friendship while working on the 2008 Peabody Award-winning documentary Black Magic. They found a common bond in their shared love for basketball. When Klores decided to move forward with the idea for the school, he reached out to Monroe, who had experience working on a similar concept in the Earl Monroe Academy — a summer program centered around education through the context of basketball — during the 1980s.

The process of bringing this idea to fruition was not easy. Klores presented his idea to education administrators for review, bouncing around at the different levels before reaching the governor’s office to formally initiate development. From there, it became a matter of settling all the bureaucratic and administrative decisions. Klores formed a board of trustees. The first trustee he chose was the late NBA commissioner David Stern, who coined the school’s slogan “a ball and a book can change the world.” However, development continued to meet further obstacles. Issues with developers, tragedy in the form of the untimely passing of key contributor Lewis Katz, last-minute staff changes and the pandemic nearly brought Klores to his breaking point. But in the end, Klores was able to see his dream through.

“I don’t integrate good feelings easily; I’m very critical of myself; I don’t watch any of the movies I’ve made, so it feels good I have to say,” Klores said.

However, he recognizes the work that still needs to be done for the school to reach its full potential. Klores aims to hire four full-time literacy interventionists who will not only work with students on an intimate level, but provide parents of students with nightly adult literacy classes as well.

The school plans to move from Pelham Bay, Bronx, to its permanent location in Mott Haven, Bronx, in 2024. The total student body will reach 440, made up of kids from historically disadvantaged backgrounds. While there’s still work to be done, there’s optimism for the potential impact the foundation of this school will have beyond New York City.

“That’s what we’re hoping for, [to be] that role model for other schools, other cities,” Monroe said. “Certainly what we’re doing now is kind of setting the table for these other schools.”

A version of this story appeared in the Oct. 18, 2021, e-print edition. Contact Mitesh Shrestha at [email protected]