On and off the Course, Golfer Arshia Mahant Excels

Stern sophomore Arshia Mahant wins golf tournaments and creates her own initiative to spread the game of golf in India. 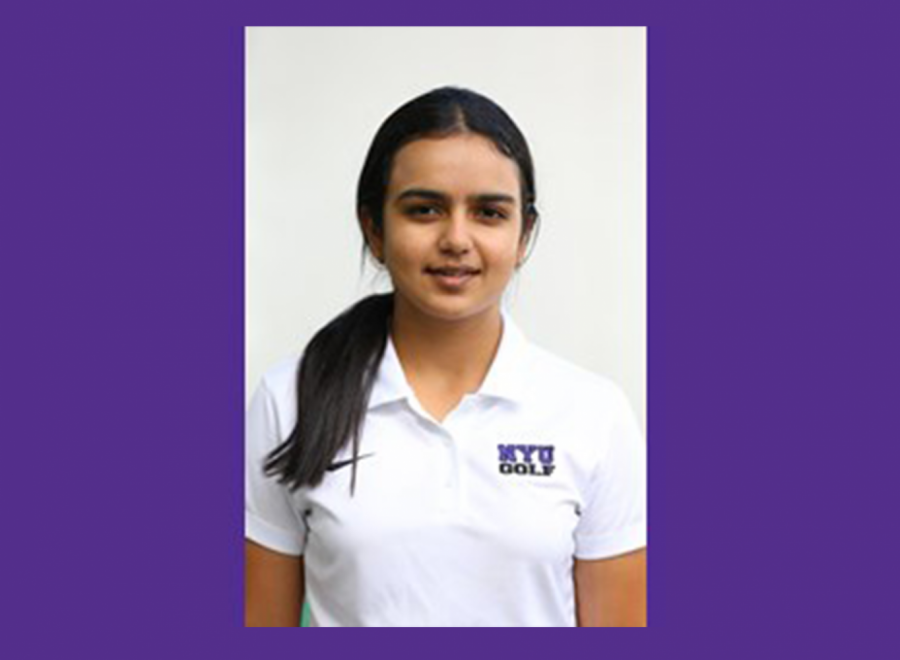 Ever since she picked up the golf clubs at the age of seven, Stern sophomore golfer Arshia Mahant has competed at the top of her sport, representing India for National Tournaments and emerging as one of the best golfers for NYU’s women’s golf team.

At 14, Mahant had already been ranked number one by the Indian Golf Union in the under-14 division in India. Her ranking allowed her to represent India at the Evian Championship in France, an experience that inspires her to this day.

Since participating in the Evian Championship, Mahant started to compete in more well-known tournaments, such as the IMG Academy Junior World Championships and the Annika Invitational — even winning an international event in New Haven at the age of 16. Her performance at the New Haven tournament was the stepping stone of her recruitment to play golf at NYU.

“I went and watched her play in one tournament,” Head Coach Brad Johnson said. “She played in Connecticut, and she ended up winning that tournament. So, I watched her play, just had a chance to meet her on campus.”

For Mahant, her passion and devotion for golf keeps her motivated to train and serves as a reminder during the bad times.

“First of all, I feel like if you’re not passionate, truly passionate, about something, you can’t be good at it,” Mahant said. “And golf is something I’ve always been very, very passionate about. So my love for the game is what keeps me going, what makes me work hard every day. I also feel like you have to have a lot of patience, focus, and discipline, which I do feel I have.”

Sensing this similar passion in other golfers, Mahant was inspired to start the “Adopt a Golfer” initiative in India, helping promote golf to younger children and alleviate the financial burdens the game offers.

“So over here in India, I play a lot [of golf] at the Delhi golf club and the ITC Golf Club,” Mahant said. “In India, we have caddies who pick up our bags on a regular basis. So one of my caddies has two daughters, and they were really interested in the game. They would borrow my clubs and hit a few balls.”

For Mahant, seeing the two daughters have a passion for golf, yet couldn’t invest the money and time, sparked an interest for her to make a change.

Although attending NYU means she is currently unable to carry “Adopt a Golfer” forward, her brother, who is two years younger and shares her passion for golf, was able to continue with the initiative.

“So after I went off to college, [my brother] went forward with that, and now the authorities at the clubs are managing it,” Mahant said.

Though the club authorities manage the initiative, Mahant sees a future where she returns to the cause she started.

“At the basic level, many of the members contributed funds to the children of the caddies, and some of them even got health insurance, something which you would have never had access to otherwise,” Mahant said. “But I wish I could have carried it forward long term, which is on a hold right now, but maybe I do carry it forward in the future.”

For NYU, in her first season, Mahant played a pivotal role in helping the women’s golf team win the NCAA Division III Championship during the spring season. On the golf course, Mahant was impressive, recording five birdies, four over the first nine holes. She also ended the tournament as the runner-up individual national champion.

Off the course, her leadership inspired her teammates to bounce back from the rough teamwide performance on the back nine holes that had widened the gap between them and Williams College to eight stokes.

“And at dinner [following day one of the tournament], she was very vocal about how we couldn’t do that again,” Coach Johnson said. “She’s usually pretty quiet and not so serious, so that was a shock to everybody. I think that’s a huge part of the reason that we did so well.”

Having missed the fall season studying abroad and seeing her spring season cut short due to the outbreak of the coronavirus, Mahant has waited a long time to once again step on the golf course for NYU.

“It was unfortunate that the season ended abruptly; I was looking forward to going to Florida for [sic] spring tournament,” Mahant said. “I was excited for the championship again, to try and bring it home again for the second time.”

When NYU returns to the course, Mahant’s team goal is fairly succinct.

A version of this article appears in the Monday, April 6, 2020, e-print edition. Email Kevin Ryu at [email protected]