No Obstacles Can Stop This Junior Guard

Despite an asthma condition that has limited her playing time for the women’s basketball team, Steinhardt junior Haley Will’s passion for the sport has driven her to be the best teammate she can be. 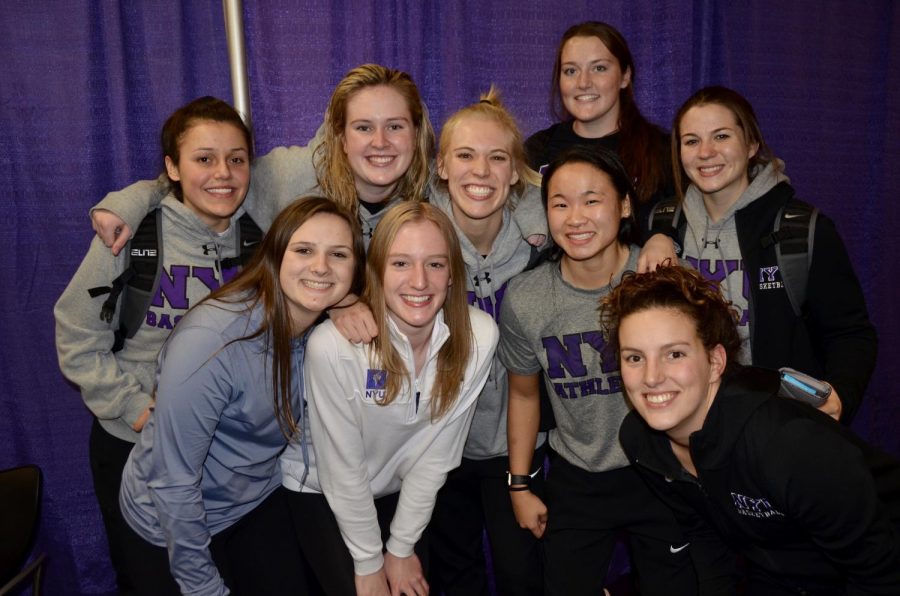 Steinhardt junior Haley Will, back row center, is ready to make a comeback on the basketball court. Will has been injured during most of her career at NYU, but her passion for the sport won’t let that hold her back. (Photo courtesy of Haley Will)

When her asthma and pneumonia sidelined her for all of junior year of high school, Haley Will questioned how concerns about her health would impact her college recruitment. Now a Steinhardt junior, Will did not think many coaches would use a roster spot on someone who could potentially never play basketball again. Thankfully, she had already impressed NYU women’s basketball team coaches, then led by Head Coach Lauren Hall-Gregory.

“I have so much gratitude [for them] for taking that risk on me because, as I told them, I didn’t know if I’ll get healthy,” Will said.

Unfortunately, these concerns have proven to be true so far; Will has yet to step on the court in her three seasons at NYU. As a child, Will suffered from a weak immune system and severe asthma, which worsened after she developed asthmatic bronchitis during her sophomore year of high school. From then on, no medication or treatment has given her more than a week or two of sustained time on the court.

Despite repeated setbacks and a never-ending cycle of new treatments, Will has never seriously considered leaving the team.

“We all love the game and are supportive of each other,” Will said. “When you find that group, I just think you’d be foolish to walk away from it, no matter what you’re going through.”

For Will, not being able to play did not rob her of a role on the team; her circumstances just changed how she could be a helpful teammate. She has become a vocal leader from the sideline, engaging with each teammate before every practice and providing a positive lift even during frustrating runs of games.

“Even in practice, she’ll come and be the loudest person,” Rory Meyers College of Nursing junior Katie Foos said. “[She] gets everybody’s spirits up.”

They also recognize how frustrating this experience must be for Will, forced into a three-year hiatus from a game she loves. Basketball has always been a huge part of Will and her family’s life. Her older sister plays at Brown University and her younger sister plays at her local high school. Even after developing asthmatic bronchitis, Will pushed through to play the rest of her sophomore year, which is when she captured the interest of Head Coach Hall-Gregory and her staff.

“She’s the only person that I think could ever deal with a situation [like her’s] and be so positive,” CAS senior Annie Barrett said.

Will has also found other outlets to express her love for basketball. After her first year at NYU, Will volunteered in Kenya, coaching basketball to school students through an organization called Play BOLD.

“It was a humbling experience to be able to bring the game that you loved growing up to these kids,” Will said.

The excitement of the kids also reaffirmed her commitment to returning to the court.

Will is cautiously optimistic about the prospect of finally returning next season. The recently-regimented diet and medication have been agreeable, and she has begun to gradually incorporate longer workouts into her rehabilitation. It has been a delicate process, trying to strengthen her immune system and raise her conditioning without endangering her health. However, she believes she is on track to return for her senior season.

“This past year has been a huge year for me,” she said. “It’s been the first time since 2013 that I haven’t been sick during the winter.”

Whether or not Will successfully returns to the court next season, she will continue to inspire her teammates.

“She hasn’t touched the court in three years and yet she continues to persevere,” Foos said. “I think it’s incredible.”

A version of this article appears in the Monday, March 30, 2020, e-print edition. Email Kevin Ryu at [email protected]