On Tuesday, Feb. 18, NYU students from all schools traveled to Chelsea Piers for the Violet 100 All-University Games. 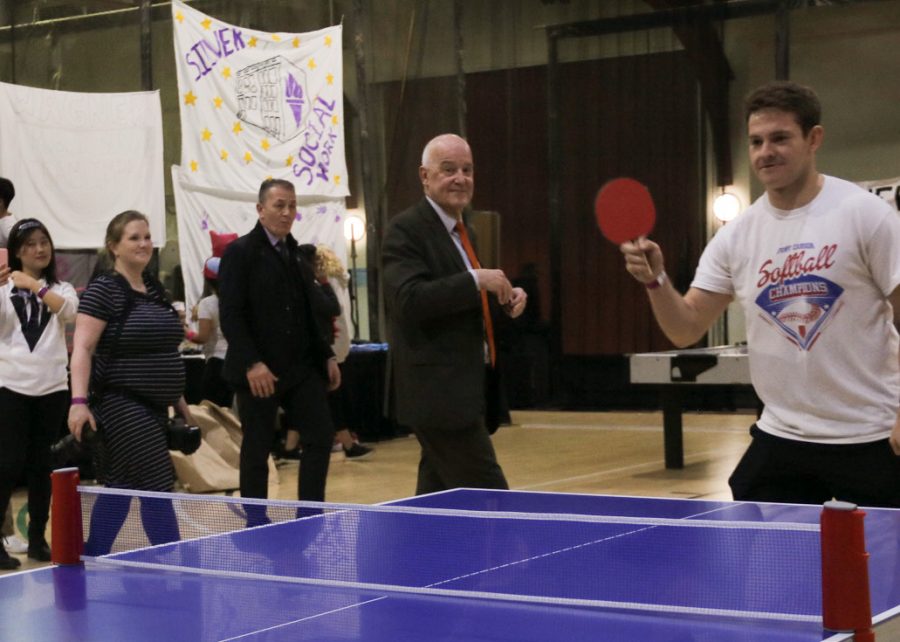 At NYU, where students willingly acknowledge the lack of school pride, Violet 100 — NYU’s official spirit week — gives students the opportunity to experience a sense of collegiate camaraderie. On Tuesday, Feb. 18, Violet 100 kicked off with the All-University Games, an evening of intramural competition between NYU schools and alumni in a variety of events from ping pong to basketball to cup stacking.

As the games went underway, students coalesced to cheer and support their teams across all events scattered throughout the gym. The level of turnout surprised Adhithya Vijayathevar, a Gallatin first-year representing the Inter-Residence Hall Council.

“I didn’t think it would be this big of a turnout,” Vijayathevar said. “Especially a lot of the grad students, I didn’t expect that. There are even some alumni here. I was blown away.”

Convening at Chelsea Piers, students expressed their allegiances through custom-made t-shirts and color-coded bandanas. Many sported designs that highlighted their school’s distinct characteristics; the School of Professional Studies rocked shirts with the slogan “We Go Pro” on their backs and the School of Dentistry sported bandanas that read “JAWS, CAREFUL … WE BITE”.

Joao Carlos Leite Villa, a Master of Laws candidate at the School of Law, was seeking ways to become more integrated into the school.

“I am spending only one year at NYU, so this is a nice opportunity to meet other people and have fun,” Villa said. “I think it’s amazing. I have never seen so many people playing sports at the same time. I am loving it.”

Among those encouraging on the contestants was President Andrew Hamilton. An annual attendee at the All-U Games, Hamilton expressed his appreciation for the students’ enthusiasm and effort.

“There is such a great vibe here,” Hamilton told WSN. “Everyone is having fun and having a little bit of competition as well.”

Hamilton didn’t only cheer for the competing students, he also took part in the games — although he had become more careful about his event of choice.

“I particularly like tug-of-war,” Hamilton said. “I participated last year, but I managed to pull every muscle in my back. So I am taking it calmer this year.”

As noted by Hamilton, the spirit of competition was not lost on the students. The tug-of-war match between the Graduate School of Arts and Science (GSAS) and the College of Arts and Sciences (CAS) left the losing CAS students strewn across the floor. De’Ane Kennedy, a Tandon senior and the school captain for the event, voiced her suspicion some school was trying to gain an unduly advantage.

“There was a little mishap with the Tandon buses,” Kennedy said. “I think they tried to sabotage us.”

Kennedy was not clear on who sabotaged the Tandon buses. Perhaps it was the School of Dentistry, who took the All-U Games trophy, with the School of Medicine finishing second and Stern placing third. Awards aside, the Games gave all participants the opportunity to bond with students both within and outside of their schools — uniting the student body with school pride.

A version of this article appears in the Monday, Feb. 24, 2020, print edition. Email Kevin Ryu at [email protected]