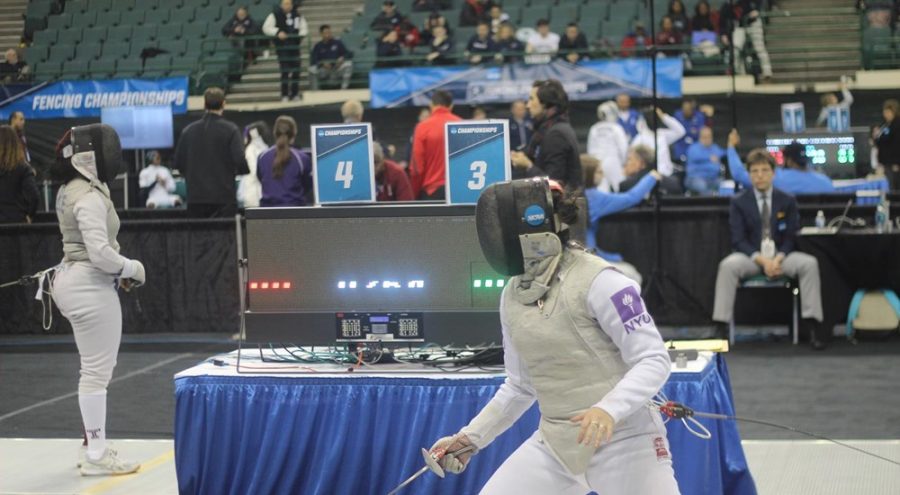 CAS senior Grant Williams competed in the NAC North American Cup in Kansas City, Missouri last weekend. The tournament gives out points, which fencers use to make it to qualification rounds for the U.S. Olympic team. Williams, who competed in the Division I men’s sabre event, did well in the round robin stage and earned a first-round bye in the knockout stages. From there, he won his first four rounds of the tournament, but fell to Rio silver medalist Daryl Homer 15-12. This put Williams in a tie for third place at the end of the weekend.

After sitting out last year to train for the Olympics, Williams will rejoin the team for its next tournament, the Temple University Open on Sunday.

The Violets return to the pool on Friday, Nov. 8 for the NYU invitational at Palladium Athletic Facility.

The men’s side of the swimming & diving team also won its first meet Saturday, also against Rowan. The 180-120 victory was spearheaded by first-place performances from CAS sophomore Graham Chatoor in the 1,000- and 500-yard freestyles, CAS sophomore Justin Lum in the 100- and 200-yard breaststroke and Stern junior Elan Oumarov in the 100- and 200-yard butterfly. NYU divers came in second in the two diving events. Steinhardt senior Nick Lemieux placed second in the one-meter dive, and Rory Myers sophomore Cole Vertin was second in the three-meter dive.

The men continue their season on Friday, Oct. 8 at the NYU Fall Invitational at Palladium.

The Violets snapped their three-game losing streak on Saturday, routing the College of Staten Island 5-0. The game was even until CAS sophomore Ellie Marks opened the scoring in the 51st minute. Stern sophomore Spritle Hirano followed suit in the 53rd minute to extend the lead. Then, in the 55th minute, Marks got her second of the game on an assist from Liberal Studies first-year Gabriella Funk. Scoring tapered off for seven minutes until two more goals came from Stern first-year Cora Creighton in the 62nd minute and CAS senior Jade Keane in the 66th on an assist from Gallatin first-year Hadley Bushala.

The now 10-5 Violets will look to carry this momentum to upstate New York on Friday when they face off against the University of Rochester.

On Saturday, the men’s soccer team looked to rebound after losing its first in eight games to the University of Chicago last Sunday. They did just that against Mount St. Mary College, beating the Knights 4-0 and snapping their eight-game winning streak. The scoring started early for the Violets. Stern junior Santiago Huertas scored in the third minute off an assist from LS junior Maxi Rodriguez. NYU padded their lead in the 31st and 36th minutes on goals from Stern first-year Evan Lewis and CAS sophomore Vincent Bulzoni, who scored on an assist from Stern junior Matteo Russo. CAS first-year Talal Said capped the scoring at four in the 64th minute on an assist from SPS senior Ben Green. The Knights were only allowed seven shots in the game.

NYU will return to the pitch on Friday to take on Rochester on the road.