Both cross country teams finished fifth, women’s volleyball went 2-1 on the week and men’s soccer split their games while women’s soccer dropped both. 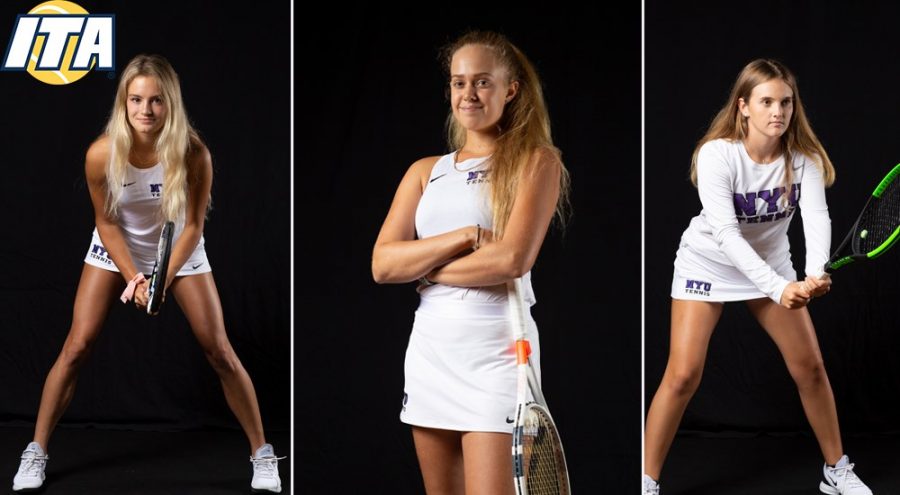 NYU went 2-1 this week with wins against Baruch College on Tuesday and Brandeis University on Sunday. On their senior night, the Violets swept Baruch 25-14, 25-15, 25-15 and recorded their fourth straight win. This snapped Baruch’s own four-game win streak. The team honored their three four-year seniors as Steinhardt senior Sabrina Krebs, CAS senior Caroline Rapp and CAS senior Kelsey Kraetz all saw significant playing time and ceremonies honoring their years with the program.

The Violets had a doubleheader on Sunday, as they faced Carnegie Mellon University and Brandeis. The first of those was a 3-1 loss 22-25, 25-16,17-25, 24-26. The nightcap went better for NYU as they only dropped their third set in a 3-1 victory. Team leaders included Gallatin sophomore Maddie DeJong with 12 kills, Stern first-year Nicole Dao with 23 assists and CAS junior Jacqueline Kupeli with 13 digs.

The Violets’ next competition will be another double header in Rochester this Friday as they take on the Rochester Institute of Technology and Fredonia University.

The Violets’ three All-Americans this season competed in the Oracle ITA Cup on Thursday and Friday, and all three wrapped up their fall seasons with wins on Friday. Stern first-year Karina Jensrud played in singles, losing her first two matches on Thursday. After that slow start, she turned things around in her last match, beating Bethel University (Minnesota) first-year Grace Riermann 6-4 and 6-3 to finish tied for 15th place in the tournament.

On Friday, the doubles team of Stern junior Anna Maria Buraya and Liberal Studies first-year Anastasiia Balyk was more successful, winning both of their matches. The first came on a 10-8 supertiebreaker against Bethel University and the next came on a 6-2, 6-3 sweep of Kenyon College. This was enough to place the duo ninth in the tournament.

The Violets will return to the court in their spring season, when they travel to Swarthmore College on Feb. 21, 2020.

NYU dropped both of their matches this week. The 21st-ranked Violets fell to fourth-ranked  Washington University in St. Louis on Friday and 13th-ranked University of Chicago on Sunday. The former was a back-and-forth affair as NYU fell 2-1. After a scoreless first half, WashU sophomore Erin Flynn found the net in the 49th minute. CAS senior Isabella De Almagro was able to tie it up, scoring on her own rebound in the 69th minute, but later in the 73rd minute, WashU senior Taylor Cohen took back the lead. That score held.

On Sunday, the Violets lost a defensive match to Chicago. The sole goal of the game was scored by Maroon junior Claudia Hodgetts in the 32nd minute. Despite the loss, NYU outshot Chicago 8-7 on the day, which also saw the team’s eight seniors honored.

The Violets return to the pitch this Saturday to take on the College of Staten Island on the road.

The Violets’ winning streak came to an end this week as they split their two matches. On Friday, NYU notched their sixth straight win and fifth straight shutout as they beat WashU at home 1-0. The men only allowed two shots on goal. The only score of the game came on an unassisted shot from SPS senior Sergio Monton in the 48th minute.

Senior Day on Sunday was also a 1-0 game, but this one went the wrong way for the Violets,  as they fell to Chicago in double overtime. The game’s only goal came from Chicago sophomore Jorge Branco in the 106th minute. This was NYU’s first UAA loss.

NYU’s next match will be at Mount St. Mary College this Saturday.

The Violet’s next race is the UAA Championships hosted by Carnegie Mellon on Saturday, Nov. 3.

The women’s side of the Rowan Inter-Regional Border Battle was a 6k race, and NYU placed fifth. Steinhardt first-year Siena Moran came in first among NYU runners, finishing 10th of the 224 runners in the race with a time of 21:30.3. Other top-40 finishers were CAS first-years Milly Ames and Leah Haley, who placed 37th and 40th respectively.

NYU will next run in the UAA Championships hosted by Carnegie Mellon on Saturday, Nov. 2.

A version of this article appears in the Monday, Oct. 20, 2019, print edition. Email Benjamin Michael Davis at [email protected]