Stern sophomore Oliver Kleban was a force in his first season on the men’s soccer team, leading the team in goals and assists. This year, he hopes to have a similar impact on the field and become a leader in the locker room as well. 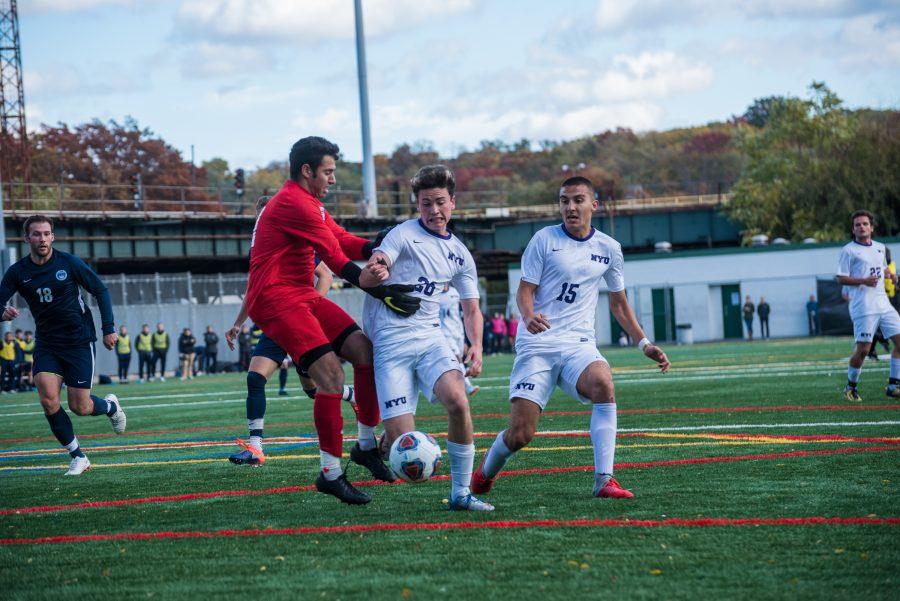 Oliver Kleban forces his way around the opposing goalkeeper before scoring in the final minute of a 2018 game against Brandeis University. (Photo by Sam Klein)

With just 16 seconds left on the clock in extra-time against Brandeis University on Nov. 3, 2018, Stern then-first-year Oliver Kleban scored a last-gasp goal that led the Violets to a 1-0 victory. That goal also stamped NYU’s ticket to the NCAA Division III tournament — the team’s first appearance since 2009. Kleban’s goal and performance highlighted his grit and skill and only begins to scrape the surface of what he contributes to the team.

“On the field, I’m fast and aggressive and I think it catches people off guard because I’m not the biggest forward they’ll ever see,” Kleban said. “But I’m really good at dropping a shoulder into them and sending them into the ground. It’s my favorite thing to do, so I’d say I’m aggressive, but also pretty fast and [I] read the game alright.”

Now in his second year as a forward for the men’s soccer team, Kleban has become a leader both on and off the field. Stern sophomore and defender Louie Meeks describes him as a motivator for the rest of the team.

“He shows confidence in the locker room which is great because a lot of guys have their heads down,” Meeks said. “He’s a funny kid who can keep spirits up.”

“I think the reason why he’s such a good influence on the team is because of his work effort,” Vafiadis said. “He even says it himself, he’s not that good of a player but he works his butt off, and you see him do it.”

In his first season at NYU, Kleban led the team in goals, assists and shots on goal, earning him UAA Rookie of the Year and NYU Male Freshman Athlete of the Year awards. Head Coach  Kim Wyant, like Kleban’s teammates, attributes his success to his strong work ethic and big personality.

Kleban believes that his exceptional confidence is also what allows him to succeed — even on the biggest stages.

Wyant believes that Kleban’s mentality is crucial to his success, especially because he plays in a position that requires a lot of patience and perseverance.

“Most of the time forwards and goal scorers are going to fail before they have a success,” Wyant said. “It takes a special mentality to overcome that constant failure and to stay mentally strong and keep working in order to get points because, like I said, he’ll fail 70 or 80% of the time.”

Hopes were high after last season, but the team has endured a difficult start to the season, losing its first two games, 4-0 and 2-1, respectively. Despite this setback, Kleban believes the team will bounce back and improve as the season continues.

“I feel like I’m not where I should be and the team isn’t where it should be,” Kleban said. “I also feel like we’re one of the best teams in the country when we are naturally clicking. I mean, we had a really good practice today and we can definitely remain contenders. We will be at a better place than we are right now at the end of the year.”

A version of this article appears in the Monday, Sept. 9, 2019, print edition. Email Rebecca Choi at [email protected]