NYU men’s soccer head coach Kim Wyant, who was a member of the first United States women’s national soccer team, reflects on her journey as she prepares to lead NYU back to the NCAA tournament. 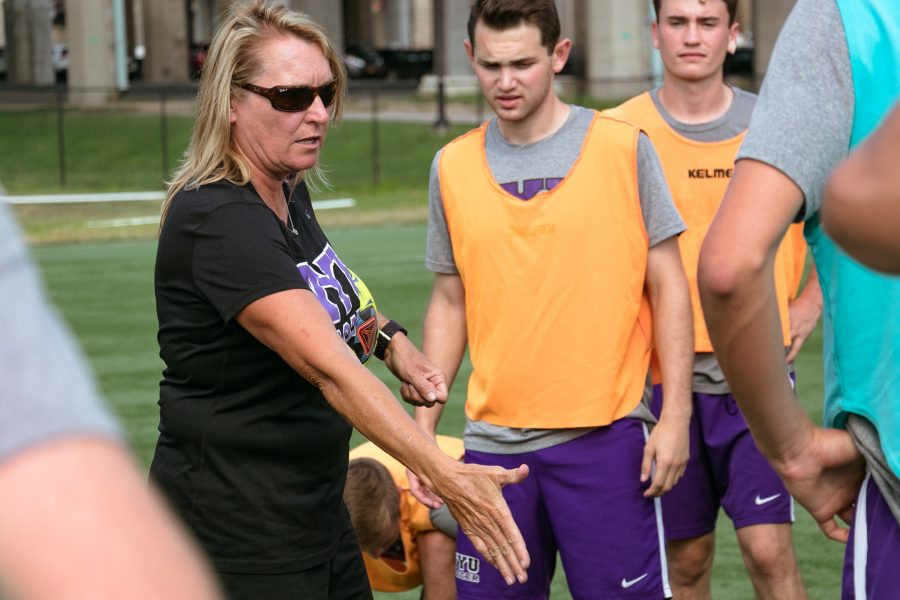 NYU men’s soccer head coach and one-time USWNT goalkeeper Kim Wyant grew up racing motorcycles and playing sports in the backyard with her older brother and his friends, before she fell into soccer by chance.

Wyant grew up in Miami in the 1970s, when the NFL’s Dolphins were enjoying the best period in the team’s history, including the only undefeated season in the league’s history.

“I actually grew up wanting to be a football player,” Wyant said with a laugh. “I thought I’d be a wide receiver for the Miami Dolphins and I quickly realized, as I got into middle and high school that it was just not possible.”

In high school, she played almost every sport available — from tennis to basketball to softball. One day, a teacher approached her trying to get girls to sign up to join the new school soccer team. A natural athlete, Wyant obliged.

“I walked out to the field and I took a look at the field and thought, ‘Whoa, this is a really big field,’ and I said, ‘So, you want me to run up and down?’ And he said, ‘Yeah, you gotta chase the ball,’ and I said, ‘Look, if it’s OK with you, I’ll play as goalkeeper.”

Soon after joining, a friend’s club team coach saw her play and offered her a spot on his team, which she gladly accepted. After a few strong performances, Jim Rudy, the women’s soccer coach at the University of Central Florida at the time, got wind of Wyant’s talent and drove down to watch her play. A year later, Wyant was standing in goal for the Knights in the first-ever NCAA Women’s National Soccer Championship Game in 1982.

In the summer of 1985, Wyant was called up to join the first United States women’s national soccer team, traveling to Italy.

“And that’s literally how it all started,” she said. “By somebody just asking me to play soccer in high school.”

Wyant went on to play 16 international matches for the U.S., recording the team’s first shutout  and win against Canada in 1986, cementing her status in history. Because there were few opportunities to earn a living playing women’s professional soccer, Wyant dedicated two decades to coaching women’s soccer, in addition to playing for the Long Island Lady Riders in the United Soccer League.

This past summer in France, the United States women’s national soccer team won the 2019 FIFA World Cup for the fourth time in the program’s history. The team has made waves both on and off the field, with some of the best players in the world appearing on national television and in the headlines, advocating for fair pay and an increased support of women’s soccer. To some, it may seem like the women’s national team has always been at the forefront of the conversation. But others, like Wyant, head coach of NYU’s men’s soccer team and starting goalkeeper for the first-ever USWNT remember the difficulties the team had to endure just to get here.

“I didn’t know any better,” she said, reflecting on her first call-up to the national team in 1985. “I thought, ‘Great, I’m going to Italy! Oh, I get some per diem money!’ We didn’t know any different. You can just go back and look at the constant battles that women have had to endure to just be invested in or be taken care of in the way that they should be taken care of.”

Wyant applauds the work that players like Megan Rapinoe, Kelley O’Hara and Alex Morgan are doing to promote the women’s game and fight for what they deserve.

“They’re doing fantastic,” Wyant said. “They’re making 200,000% than what I made because we made zero. But they’re making 100,000% of what [Julie] Foudy and Mia Hamm did. And it’s going to be interesting to see the next generation, if they’re going to push the envelope even further.”

Wyant is grateful for the many opportunities that playing and coaching soccer provided her in life, calling it “rewarding” for her.

Now, the men’s soccer head coach is entering her fifth season in charge at NYU. In 2018, Wyant led the team to its first NCAA tournament appearance since 2010. (They won their first round but lost in a penalty shootout to Montclair State in the second.) Despite all of the strides made by women in sports, Wyant became the only female-identifying head coach of an NCAA men’s soccer team. Her players, however, have no doubts about her abilities or her leadership.

“One of the most common questions you get from other athletes is ‘What is it like playing for a [female] coach?’ And to be honest, it’s not even something you think about because it’s so natural,” Stern junior and men’s soccer defenseman Jake Velvel said. “Kim fits so well with us, no one really thinks about it in a negative way. The fact that Kim can be a head coach on a successful men’s team speaks volumes.”

On the backs of the players’ training shirts are three words that define the culture that Wyant has established at NYU: “Compete, respect, elevate.”

“One of the hardest parts of coaching is reaching your players and for us, last year we found a way to naturally gel everything together,” Velvel said. “And a lot of that was through Kim. Her relentlessness, remembering what our program’s about, remembering who we are, remembering to stick to our plan, it guided us to the season we had.”

Assistant Coach Joseph Ruesgen has spent the past three seasons working with Wyant and credits her for the rise in the men’s soccer program.

“It’s been massive,” Ruesgen said. “It’s been revolutionary. From where the program was and where it is now, it’s a complete 180 and I think it’s obviously in large part to Kim’s leadership and her vision.”

When asked how Wyant’s international experience and playing career adds to her coaching pedigree, Ruesgen said that it supplements her excellent expertise and judgement.

“She clearly knows the game, and even if she never had the international experience she’d still be as incredible as she is now,” Ruesgen explained. “I don’t think that that really defines her as a coach.”

Since taking over as head coach of the men’s soccer team in 2015, Wyant has steadily improved the program, earning an overall 35-32-6 record and three consecutive postseason bids, including the Eastern College Athletic Conference tournament in 2016 and 2017 and the NCAA tournament in 2018. As she prepares for the upcoming fall season, she thinks back to her formative days in college and hopes to create a similar welcoming environment for her players.

“I know that these kids are having a great experience just being in college, and if I can add to it by giving them a real positive experience being a part of a team, then I just think that’s the greatest job in the world,” Wyant said.

A version of this article appeared in the Sunday, August 25, 2019 print edition. Email Bela Kirpalani at [email protected]