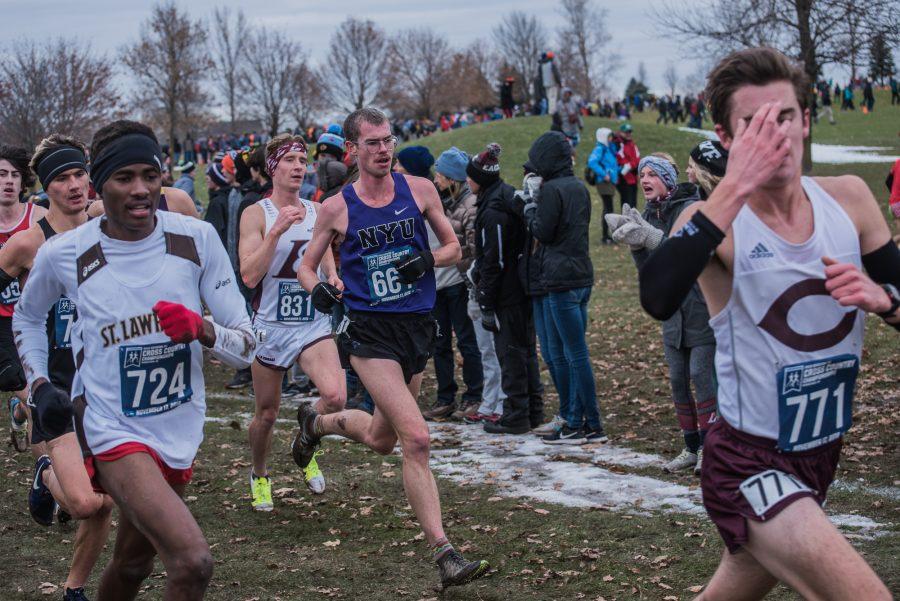 Senior Ben Haderle competes at the NCAA National Championships in Oshkosh, WI in November 2018. Haderle finished fourth in the 1500m run at the Greyhound Invitational this past Saturday. (Photo by Sam Klein)

Men’s Tennis
The men’s tennis team split its games this week 1-1, defeating the University of Rochester earlier in the week and falling to Stevens Institute of Technology later.

The Violets defeated the University of Rochester in a close game (5-4) on April 14. The men took two of the three doubles matches and fought hard to take three of the six singles matches. Starring in the win was CAS sophomore Lucas Biondi, who won in both doubles and singles play.

Up against Stevens Institute of Technology on April 17, the men lost a heartbreaker (5-4). In this game, NYU only won one of the doubles matches while splitting the singles matches.

The men will return to the court when they compete in the UAA Championships from April 24-26.

Women’s Tennis
The women’s tennis team dominated its game played this week on Senior Day, shutting out the University of Rochester 9-0. Additionally, the women won each match in both doubles and singles play in straight sets. This win gave the Violets a final regular season record of 8-1.

The women return to the court to compete in the UAA Championship starting on April 25.

Men’s Fencing
A few members of the men’s fencing team competed at the USA Fencing Division I National Championships from April 12-15.

The first day of competition was highlighted by CAS junior Grant Williams’ performance when he tied for third and earned a bronze medal in the saber competition. Williams went 5-1 in pool play to earn a first-round bye. He breezed through the first two elimination rounds 15-11 and 15-9. He then won two tight matches in the round of 16 and quarterfinals, winning 15-13 and 15-14, respectively. He would fall to the number-one seed in the semifinals 15-10.

On the second day, the team of Tandon sophomore Sam Bekker, Steinhardt first-year Liam Carpenter, CAS first-year Christopher Mancini and GLS sophomore Ian Sanders won the bronze medal in the Division I Epee event. After earning a first-round bye, they defeated NWFC Inspire in the quarterfinals before falling to the Peter Westbrook Foundation in the semifinals.

Strong pitching was the name of the game for NYU in its game against SJC Brooklyn on April 17. Eight different pitchers took the mound for NYU, combining for nine strikeouts and allowing just five hits. Stern junior and pitcher Ford Ladd started the game and earned the win. Stern junior and pitcher Sal Cammisuli pitched a pair of shutout innings. Stern senior Ryan McLaughlin led the Violets with two hits.

The Violets took two thrillers at the hands of Brandeis University on April 19, the first by a score of 6-5 and the second game 15-10. The Violets trailed early in the first game 4-1, but a 2-RBI single from GLS first-year Zane Baker highlighted a three-run sixth inning. After Brandeis reclaimed a one-run lead, the Violets scored the final two runs of the game to squeak by with the win. Stern senior Jack Walter led the Violets to victory with three hits.

In game two, NYU took an early 4-1 lead, which Brandeis tied shortly after. NYU then exploded with an eight-run sixth inning that put NYU ahead 14-5. CAS senior Jack Elias led the offense with three hits that knocked in four runs.

The Violets will complete the four-game series with a doubleheader against Brandeis on April 21.

Softball
The softball team had an exceptional week, sweeping all three games it played against UAA rival Washington University in St. Louis.

In the doubleheader this week on April 19, NYU took both games by scores of 7-6 and 5-3, respectively. The game one victory was highlighted by a walk-off three-run homer by SPS senior Ashley Mains, which was NYU’s third home run of the game. Game two saw NYU run out to a quick 4-0 lead through five innings that WashU was unable to recover from, mustering up only three runs throughout the game. Steinhardt senior Diana King and Gallatin junior Morgan Clemens both homered in game two to lead the offense.

The final game of the three-game series on April 21 had much of the same taste of the first game of the series, where NYU won off of a walk-off two-run homer by King that gave the Violets a 4-3 victory. The walk-off was set up by CAS first-year Kalena Paresdes, who scored on an RBI-groundout early in the seventh inning before King blasted her game-winning homer.

The Violets return to the diamond on April 26 with a four-game series against UAA rival Carnegie Mellon University.

Track and Field
The track and field team competed in the Greyhound Invitational on April 20. There was no team scoring at this event.

The standout performer for the women at the event was CAS first-year Athina Zodl, who placed second in the 5,000m with a personal-best time. There were other great performances by Violets as well. CAS first-year Gabrielle Stankosh and Gallatin first-year Valentina House took seventh and 10th respectively in the 1,500m. CAS junior Amanda Casas placed 10th in the 400m hurdles.

The Violets return to action at the UAA Outdoor Championships on April 27.

Women’s Golf
The women’s golf team returned to the course for the first time in more than a month, competing in its first two rounds of the Vassar College Invitational, starting on April 20.

As a team, NYU shot 22-over-par 310 and currently sit in second place out of a pool of 12 teams. NYU is currently nine strokes back off the tournament leader Williams College. Leading the way for NYU individually is CAS senior Jenni Bluetling, who shot four-over-par 76 and is currently in fifth place out of 64 overall golfers.