Softball Takes Care of Business in a Busy Week 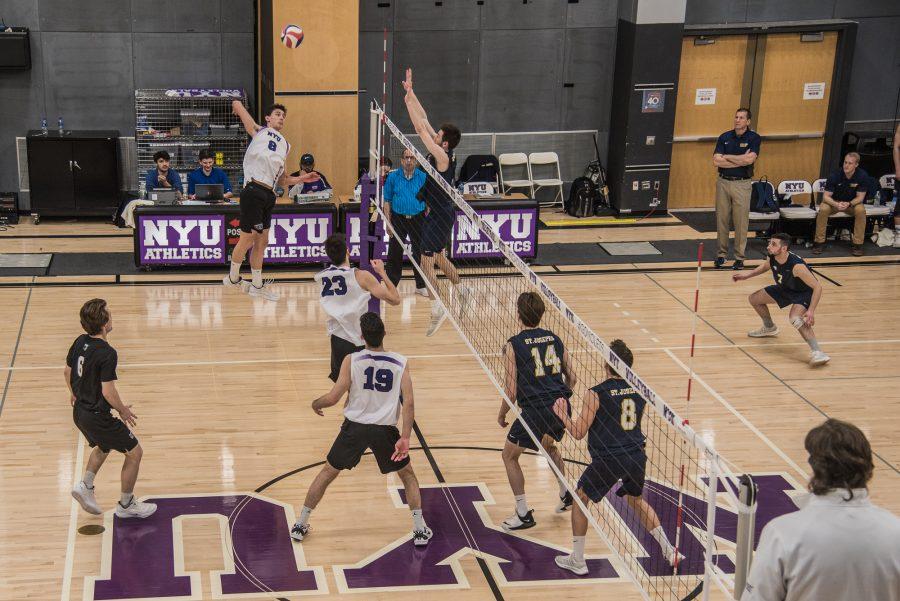 First-year James Haag (8) goes for a kill in a game against St. Joseph’s College (L.I.) on Saturday. NYU won the game in four sets, moving their record to 12-8 overall. (Photo by Sam Klein)

The softball team had a busy week, playing in three doubleheaders and going 4-2 over that stretch of games.

The week started off with a home doubleheader sweep of Rutgers-Newark University (10-9, 6-2) on March 26. The Violets used solo home runs from Steinhardt senior Diana King and CAS first-year Serena Ponciano to tie the score at six at the end of the fifth inning. Rutgers came back to take a three-run lead, but NYU capitalized on three Rutgers errors to take the game by a single run. NYU continued to benefit from six errors by Rutgers in the second game and a gem of a pitching game from Stern senior Karissa Zubulake, who had a career-high 11 Ks. NYU ran away with the game by the end of the fifth inning, scoring five runs in that inning alone.

The next doubleheader against Stevens Institute of Technology on March 27 saw NYU win the first game 3-1, but dropped the nightcap 1-2. RBIs from CAS first-year Ponciano and SPS senior Claire Stefanelli in the seventh gave NYU the win. The second game was scoreless for seven innings before going to extra innings. SPS senior Ashley Mains scored the first run of the game at the top of the eighth, but Stevens answered with two unearned runs at the bottom of the eighth to take the victory.

The Violets ended the week with the start of UAA play against Case Western Reserve University, splitting their doubleheader (4-2, 3-5). Heading into the fifth inning with a one-run deficit, NYU caught fire and didn’t look back with solo homers from CAS first-year Kalena Paredes and SPS first-year Rachel Colbus and a sacrifice fly by Stefanelli. The Violets got off to a strong start in the second game with a two-run lead, but Case Western came back with three runs in the bottom of the fifth and the Violets couldn’t recover.

The women will return to the field on April 4 when they face off in a doubleheader against local rival Hunter College.

The baseball team rode the wave of strong pitching and an aggressive offensive approach to go 2-0 for the week.

The men found themselves in a close game against SUNY New Paltz, but hung on late in the game to pull out the win 2-1. NYU’s star of the game was starting pitcher Stern junior Ford Ladd, who pitched 7.1 innings, only allowing four hits and one earned run.

The Violets came out guns blazing in their second game of the week against the College of Mount Saint Vincent, scoring 10 runs in just the first two innings and coasting to a 11-3 win. Tandon sophomore Austin Stenstedt batted in a game-high five runs, three of which came by way of a bases-clearing triple in the first inning. A two-RBI single by LS first-year Zane Baker and a pair of RBIs from SPS senior Colman Hendershot and Stenstedt drove in four runs in the second inning. CAS junior Sal Cammisuli was the starting pitcher for the game, only allowing one run with seven Ks in five innings; he now has an ERA of 1.27 for the season, the best in the rotation.

The Violets look to continue this momentum on March 31 when they host the City College of New York.

NYU faced off first against Arcadia, trading offsets with NYU taking the first and third sets and Arcadia taking the second and fourth sets, forcing a tiebreaker fifth set. The Violets dominated the final set, scoring the first four points en route to a 15-8 set victory and taking the match in five sets. Stern junior Alex Li led the way with 14 kills and Stern first-year Ryan Whealen led the team with 26 assists.

The Violets had a strong start against St. Joseph’s, taking the first two sets. After dropping the third set, the Violets took back the momentum and dominated the fourth set 25-16 to solidify the match win. Tandon junior Neil Ferraro led the way with 10 kills and 10 blocks while CAS junior Matin Bikdeli had a team-high 35 assists.

NYU returns to the court to take on Vassar College in its final United Volleyball Conference match of the regular season on April 3.

The men’s golf team hosted its NYU Spring Invitational from March 30 to 31 and are currently in second place with a score of 308. Babson College currently leads after shooting 296.

NYU played better as a unit during the second day of the invitational, shaving off eight strokes from the first day and finishing with a total score of 608. Burlison shot 75 (146 total) and finished second overall out of 60 golfers. Lee ended tied for fourth place. Shen and Tisch sophomore Robbie Keyes took 10th and 11th place.

The Violets return to the green when they compete at the Hershey Cup from April 7 to 8.

A version of this article appeared in the Monday, April 1, 2019, print edition. Email Zach Han at [email protected]