Opinion: Let’s be real about BeReal

The new social media craze is an exercise in connection and memorialization. 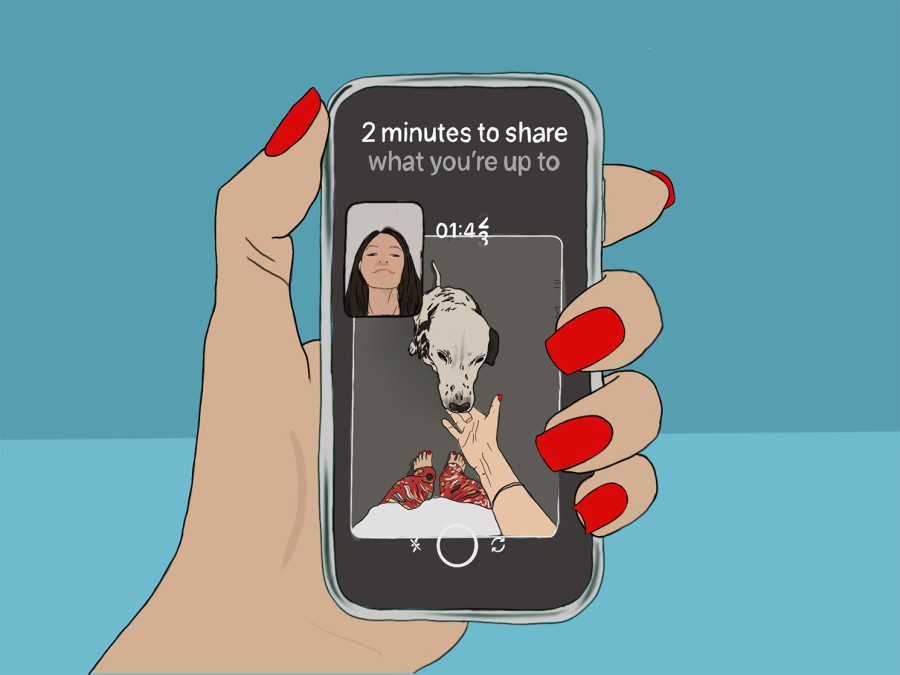 BeReal provides insight into what your friends are doing, bringing you closer together. (Illustration by Aaliya Luthra)

I love my friends from NYU and I love my friends from high school, even though they go to other schools far away. The nature of our distance lends to my stage four FOMO — so I love having their locations on Snap Map and Find My Friends. I can see that they’re at that frat house again or their dorms, or in class — like a friendly stalker, keeping an eye on those I love with no practical purpose. I love having insight into my brother’s life as a junior in high school or my best friend’s life across the country in San Diego. A phone call or text message often requires more effort than most are willing to give, but BeReal has made authentic and surface-level relationship maintenance easy. My favorite time of day is ⚠️Time to BeReal ⚠️.

There is something beautifully universal about every single BeReal app user getting notified at the same time and scrambling to look cool or hot or interesting for the same two minutes. We are all so insecure about our lives and our looks, so watching everyone else feel those same insecurities and still posting two unedited photos each day breaks the mold of traditional social media for the better. And who am I to even say this is not traditional? Social media has been around for such a short period of time that perhaps other apps will adapt. Snapchat makes photos disappear, Instagram stories only stay up for a day, and tweets can be deleted. Permanence is wonderful at times, but the shared temporarity that BeReal establishes brings us closer to the world from before digital footprints and facetune.

BeReal on a college campus — and in a city like New York — brings about a sense of community. When BeReal goes off as I walk the streets, I see crowds of young people huddling for photos, rushing against the two-minute timer. When it goes off at WSN, I hear “it’s BeReal time” and watch my own BeReal feed fill up with photos against the backdrop of our iconic red wall. At a party, we all pose in our finest outfits to capture the night and to prove to all of our friends that yes, we are at a party. BeReal is the social media platform for the in-person world.

Still, social media doesn’t reflect real life and BeReal is no exception. Most of my friends tend to BeFake. While my favorite two minutes of each day — the randomized time to BeReal — capture the most authentic of moments, the hours that follow hold their own. I love getting the notification that someone just posted late and seeing what activity they decided was more interesting to post than whatever occurred during the assigned two minutes. Still, the photos are unedited, taken within two minutes and posted on a feed with the smiling faces of the people that — for now — only live on my phone.

I hope BeReal doesn’t become another social media trend like HQ Trivia or ASKfm. I hope it gains the reputation of Instagram or Facebook and serves as a digital catalog of moments — the moments that we choose to share once every day. It is rightfully not an app that has the power for social change. It doesn’t have the space for words like Twitter or the shareability of Instagram or TikTok. Those apps hold significance in various political and cultural movements and they are necessary to push those forward.

BeReal has the power of tradition and simplicity. As of now, it is the only app that demands raw photos and doesn’t care about your political takes. It doesn’t force an algorithm of infographics or promote a culture of body shaming. It’s a show and sometimes tell — at least for those who utilize the caption feature like me — between you and the friends you choose.

BeReal isn’t there to show you celebrities or slide into DMs. BeReal is there to help you cultivate a stronger relationship with your own circle. It has AskFM’s flair for the personal. You know the people you see, and now you know them a little bit better each day. It doesn’t have the ill-intent or gossip that platforms with shareability promote. The app stands by its temporarity and shames those who break the rules; if you screenshot a BeReal, it notifies the person who posted it. The beauty of the app shines in the fact that all you’re getting is a selfie and a picture, raw, unedited, and taken within two minutes. It calls out the retakes and the lateness, though only for 24 hours. It wants you to be authentic, even for just two minutes each day. BeReal promotes accountability, not competition for followers, or subtweets or editing.

Nobody is going to go viral on BeReal. Nobody is getting more likes than the other. Nobody is going to make a career out of their posts. BeReal puts the fun in the social media game, something our generation has never really seen. We’ve only ever used the connectability of this modern technology to compete, shame, promote and proclaim. Now, Gen Z gets a taste of a world before a public digital footprint and the luxury of a private one via the “Your Memories” section that boasts a lock and tells you that these moments are only visible to you.

What I love the most about BeReal is that while all of my friends and fans can see my post between the time it was taken and the next time to BeReal, I can see a moment from every single one of my days since the day I downloaded BeReal. BeReal’s most underrated feature is its album of life. It’s not the chore of 1 Second Everyday that we each start on Jan. 1 and forget about by Jan. 10 — it’s a social movement of memorialization. We are all posting our photos for the public to see, but the app itself curates a private scrapbook. I’d rather scroll through mostly authentic moments labeled for the day they were taken than scroll through the snapchats I deemed funny or pretty or interesting enough to save to my memories.

Like my mother shows me her scrapbooks of ex-boyfriends and concert tickets, I will show my children the days I spent studying at Bobst or going to comedy shows or laying in bed and watching TV, and so will you. We’ll show the soft launch of our significant others and the time BeReal went off as we cried about that grade, internship or friend. Its power of memorialization and its push for authenticity, all within the now comfortable constraints of a social media app, make BeReal a beautiful representation of our time.