NYU should meet the proposals of the adjunct union, ACT-UAW Local 7902 — if not in support of worker's rights, then in the name of its students. 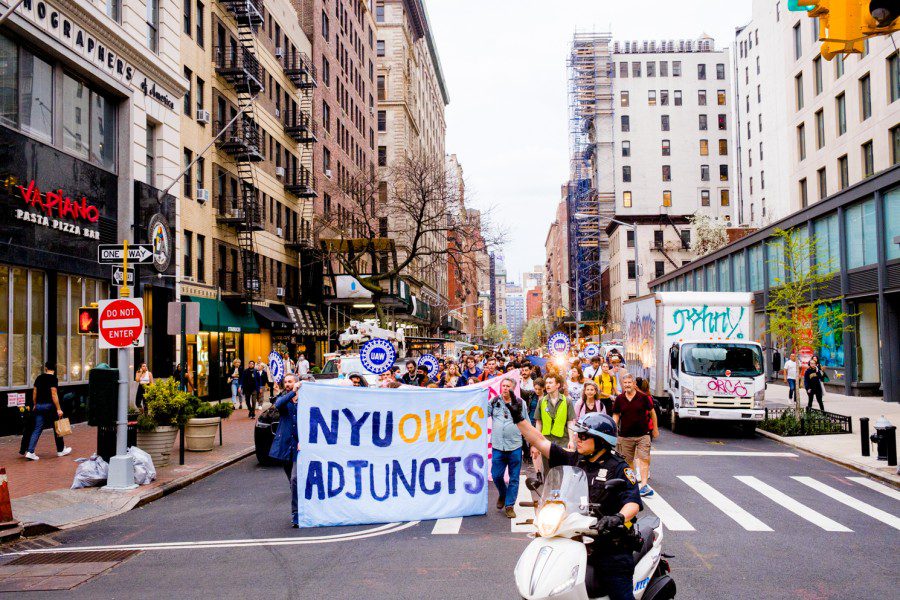 NYU and the Adjunct Union ACT-UAW Local 7902 are in contract negotiations right now as the current contract will expire on Sept. 30. (Samson Tu for WSN)

The current contract between NYU and the adjunct union ACT-UAW Local 7902 expires at midnight on Sept. 30. In negotiating the next four-year contract, the union is demanding better pay and benefits, more affordable health insurance, better reappointment rights, and pay for training. These are all basic and necessary elements of the fair contract they deserve and need, especially because NYU has dragged out negotiations for the past two years.

On Sept. 1, the union asked for a 60-day contract extension. Unfortunately, the university only agreed to 30 days, giving the union less time to reach a consensus it is comfortable with. Meanwhile, NYU handed out $2,000-$5,000 in COVID-related bonuses to non-union faculty — the unionized adjuncts were not included.

This union’s more than 4000 adjunct employees deserve more priority and recognition, and NYU students deserve to be taught by well-compensated faculty.

In a letter signed by adjunct faculty last May addressed to President Andrew Hamilton, the union laid out proposals and reasons for increased pay and reappointment rights.

“We spend significant time outside the classroom with our students in office hours, tutoring sessions, and individualized meetings that guide them in developing careers in our fields of study,” the letter reads.

Lizzie Olesker, the Second Vice President of the adjunct union and Tisch adjunct professor who has taught at NYU for more than 20 years, said that the current pay rate for adjuncts does not adequately reflect the work they do outside of class time. Those teaching credit courses in degree programs earn a minimum $149.25 per hour or a $4 hourly increase per contact hour in comparison to the previous year, whichever is higher.

“We are fighting for what we’re calling an administrative hour, which is just to reflect the amount of time we put in every week outside of class to prepare for class or to meet with students,” Olesker said.

The current contract for NYU adjuncts sets students up for an inadequate education. Professors are not getting proper compensation for time spent helping students or grading papers, which will only lead to a decrease in the quality of education. Currently, many adjunct professors work multiple jobs for a livable wage in such an expensive city and educate students at a university that can cost more than $80,000 per academic year. NYU’s tuition and endowment alone should be reason to compensate adjunct professors immediately.

“The union is also obviously taking into consideration the current inflationary environment,” Tisch adjunct professor Scott Burkhardt, a member of the bargaining committee for the union, said. “The cost of living has gone up dramatically in the last year or so.”

According to the U.S. Bureau of Labor Statistics, the buying power of a dollar in September 2017 is equivalent to $1.20 in August 2022. The minimum hourly rate for adjunct faculty teaching credit courses in degree programs during the 2017-2018 academic year was $134.00 or an increase of $5.75 per contact hour, whichever is higher. Adjusting for inflation, the current, minimum hourly rate should be $160.80 instead of this year’s $149.25.

“What they counter-offered to us would have been almost a loss because of inflation,” Olesker said. “NYU has insulted us in the counteroffers that they’ve made.”

Though we were able to speak to members of the adjunct faculty, an NYU spokesperson did not respond to a request for comment.

Adjunct faculty contribute widely to students’ education, both at NYU and across the country. Without these faculty members, many classes would not take place, and the students paying thousands of dollars for a meaningful education would not get their money’s worth. Adjuncts provide support, teaching, office hours, recommendation letters, feedback and after-hours review to students. If NYU is not prioritizing the union, then it is therefore not prioritizing its students.

NYU needs to compensate for the immense amount of work undertaken by its adjunct faculty. The university must take into account the work outside the classroom and the essential role that adjuncts play in a student’s education. The contract for the next four years should reflect this for the faculty and students.

Correction: A previous version of this article misquoted Lizzie Olesker’s comments about a proposed addition of an “administrative hour” to adjunct faculty contracts. The article has been updated to reflect the correction. WSN regrets the error.