Mainstream media coverage following last week's Brooklyn shooting has failed readers on multiple counts, focusing on the alleged attacker rather than the victims and failing to use trigger warnings. 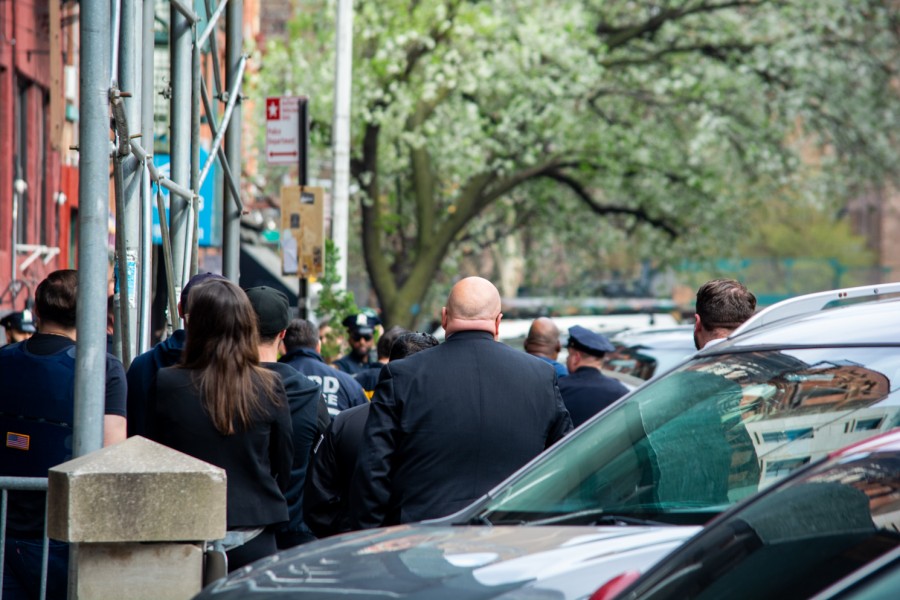 Frank James being escorted by the police. (Staff Photo by Manasa Gudavalli)

When I opened Instagram on Tuesday morning, I was met with a barrage of unsolicited images of people bleeding out in a subway car and on the platform. I found myself unable to escape from graphic images of blood splatters and hordes of people scrambling out of the car. Headline after headline speculated on how many people might have died, or when the police might identify a suspect, or where they found an abandoned van he could have used, or how many shots he fired before he fled.

Media coverage failed to include content warnings before forcing these bloody subway platform photos onto my screen. I saw every gory image and learned every detail of the violence itself but read nothing about the identities of the victims or their stories.

It felt like every major news outlet was approaching the story in the same fashion. The smaller, local news sources were the only ones that had content warnings and articles focused on the actual victims of the attack.

As of Wednesday, April 13, the New York Times had dedicated an entire article from their Brooklyn Subway Shooting Live Updates page to articles solely discussing the suspect; it was titled “Who is Frank James?” As of Thursday, April 14, the title had been changed to “The Suspect,” but the impact is equally harmful. The New York Times essentially awarded an entire article to the perpetrator of Tuesday’s horrendous crime. This is one example of major media outlets’ misdirected focus on mass shooting perpetrators rather than the victims of these crimes.

The New York Times has another March 2021 article on their website titled, “What the Media Had Learned Since Columbine,” where writers Michael M. Grynbaum and John Koblin discuss the journalistic takeaways from Columbine. They heavily encouraged media coverage of mass shootings to focus on the victims instead of the perpetrators of this horrific crimes Additionally, in “How the Times Covers Mass Shootings” New York Times writer Sarah Bahr declares that, “you’ll see The Times identifying the suspect, but certainly not publishing the twisted manifestoes in which they denounce the world and give their twisted rationale for carrying out the attack.”

In one of their articles centering on the Brooklyn shooter, a link to his now-terminated Youtube channel was embedded. Several other articles under the live updates page contained embedded links to various videos of the culprit, all now dead-ends since Youtube took down his channel. This Youtube channel is where the suspect would frequently post long-form videos expressing his bigoted views and recently, criticize New York City’s mayor, Eric Adams. In one breath, this major news outlet claims to refrain from focusing on mass shooters, but in the next, they boost the culprit’s Youtube channel. The hypocrisy couldn’t be more clear.

So why this stark difference? A study featured in an article by The Conversation hypothesizes that the more deaths related to a mass shooting, the more news reports use the perpetrator’s name. There is certainly evidence that some mass shooters have exploited the media to gain notoriety. Since a higher death count attracts more attention, why wouldn’t the shooters be motivated by more clicks?

The media has only enabled these trends. As I’m sure many of WSN’s avid readers have experienced, the media has crowded popular news channels this week with graphic images displaying Tuesday’s victims’ worst nightmares. Personally, I have even witnessed some of this media featured in pop-up ads on articles completely unrelated to the shooting.

Trigger warnings have been a hot topic of discussion recently, particularly in academic circles. But this is not an issue of just trigger warnings; if we all agree that this was a major act of terrorism, why are we so carelessly broadcasting these traumatic images? This could deeply and negatively affect unsuspecting readers who simply want a better understanding of what happened and further sensationalizes victims’ pain without their consent.

Following two years of a rise in hate crimes targeting East Asians, I cannot help but notice most of the Sunset Park-area victims appear to be East Asian. So far, I’ve struggled to find any information to confirm the demographics, or even names, of all the victims. To haphazardly share videos on their major platforms of people, specifically Asian people, bleeding out in the middle of the subway, under the context of two years of media showcasing Asian trauma, shows a lack of care by these major new outlets for their Asian readers’ mental health.

Watching your elders and relatives get beaten for nothing more than the way they look is nothing short of traumatic, and while there is little to no implication so far of racial motivation behind the Brooklyn attack, we must always consider the factor of race in everything. As an East Asian person myself, seeing more brutal Asian suffering was not something I was mentally or emotionally prepared for on Wednesday morning. When I see an elder Asian suffering, I can’t help but see my mother or grandparents in that same situation.

Now that the suspect has been taken into custody and the manhunt is over, it is time to move on from press coverage that centers on him. Major media outlets should be utilizing their huge bases to boost ways to support victims and their families as more information comes out about who they are. They have the opportunity to decide what information goes public. Whether that be financially or through political action, advocating for gun control or altering police presence in subways, platforming the victims’ desires should be the mainstream media’s top priority at this moment.

The public has had enough of the sensationalization of yet another attempted mass murder. It is time to refocus on humane values — which all journalism should be based on — to focus on real stories by real people, bringing the stories that would otherwise go unheard into the limelight. Simply put, it is time to move beyond the horrific glorification of mass shooters.

Be sure to reach out for support if you need it, question your media sources, and most importantly, stay safe.