Off-Third: The case against AirPods

This is the story of a student — a student who missed all of the wonders of the city, simply because they didn’t leave their AirPods case at home. 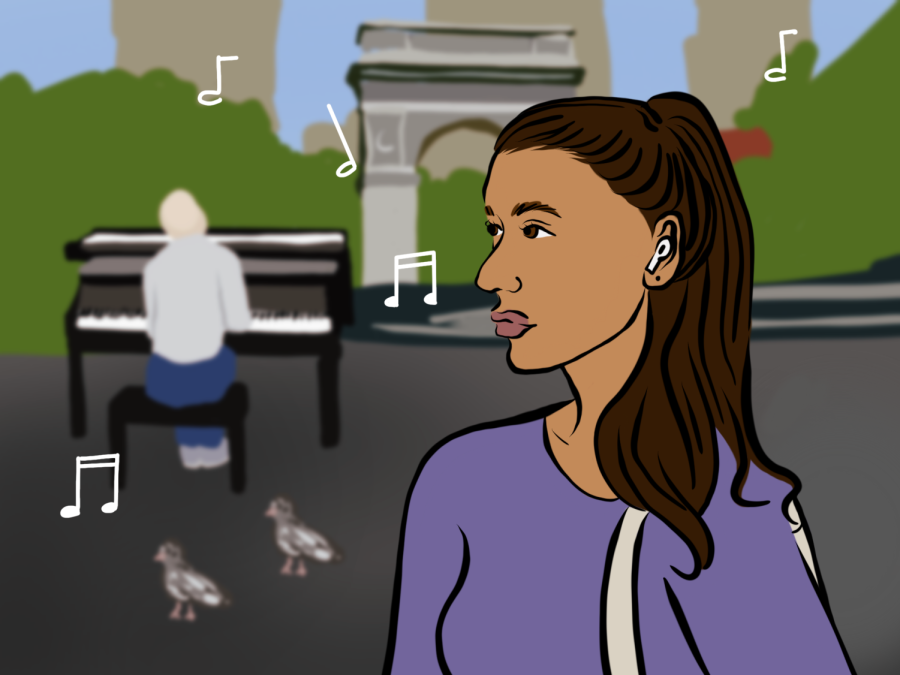 On March 29, 2022, at 4:29 p.m., an unnamed NYU first-year retraced their daily path to Silver Center through Washington Square Park, AirPods in ears. As they hurriedly weaved through bodies and the various stands selling the devil’s favorite plant, they neglected the subtle beauty of New York City life. On the outskirts of the park sat a glorious bald man at his traveling piano, playing flowing music from the sheets of notes propped in front of his shiny head. This student is guilty of ignoring the magnificent madness of Greenwich Village.

The walkability of the New York City streets is one of the unique aspects of the city, and NYU’s location is specifically special because of what it contains within. The quads of NYU’s campus, lined with bodegas, shops and performers, are far superior to the tree-bound paths and sprawling Roman classical architecture of our Ivy League foes to the north.

NYU students are supposed to be culturally observant. However, like the student in this scenario, many shun the beauty of the streets, and focus their eyes and ears away from their surroundings.

Insulating themself from the daily life of the streets, they miss out on 10-second snippets of conversation. A 30-year-old mother of two complains about the failures of her significant other.  A screaming coffee addict gets their $8 latte fix. And the blooming bodega flowers waft their fragrances around the corner. These inward-looking AirPod enthusiasts also tune out the friendly New York natives who shout — for apparently no reason when you can’t hear their actual words — but are in fact warning you of the bagel-carrying rat escaping the shop where the screaming coffee addict remains.

The student in question likes to proclaim that the music enhances their walk to class, creating their own cinematic universe as they venture into the big unknown. I understand the role music plays in the NYU obsession of manifesting the city life they’ve always wanted, but I insist that the musicians of the street have a better sense of the sound of the city than NYU’s newest honorary graduate Taylor Swift.

This isn’t Los Angeles, where students hop in their cars and blast music down the Pacific Coast Highway for entertainment. UCLA students don’t get the pleasure of performative dance troupes and TikTok street interviewers blessing the park with their never-before-seen artistic tropes.

The student in question also likes to suggest that walking with AirPods helps prevent an unwanted passerby from interrupting their peaceful walk. This narrative is misguided at best and actively harmful at worst. One of the best aspects of New York City’s uniqueness is never knowing who may walk past you at any moment. The love of your life is much more likely to stop you in your tracks and ask you out if you don’t look like you’re avoiding all societal interaction.

People of the Court, I have laid out evidence for why this student is guilty of missing out on the great pleasures of our city. I urge each and every one of you to do the unthinkable and walk for one day without subduing the beauty around you. Stop and watch the pigeons attack unassuming park goers. Listen to the bald guy playing the piano.

Nothing completes the New York walking experience like slowing down just enough to look around and realizing that you’re already two minutes late to where you’re going.

Off-Third is WSN’s satire column. Views expressed in Off-Third do not necessarily reflect those of WSN, and our publication of opinions is not an endorsement of them.