The Student Government Assembly's statement in support of NYU's Asian American and Pacific Islander population is a performative extension of support that lacks real action. 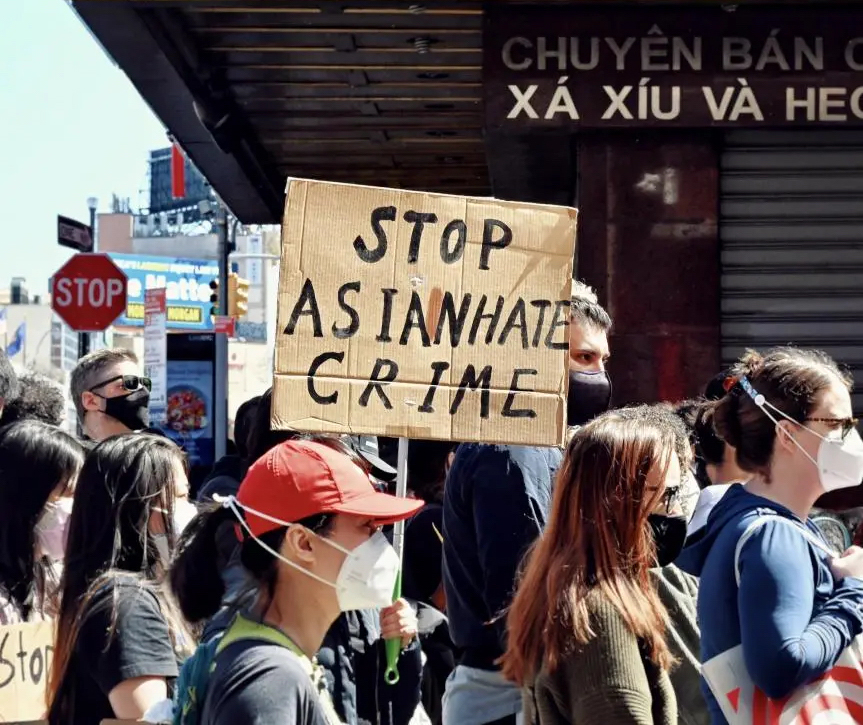 A group of protesters march through Chinatown during a protest against hate crimes against Asian people in New York City. (Photo by Sirui Wu)

On March 12, NYU’s Student Government released a statement in support of the university’s Asian American and Pacific Islander community and offered recommendations for addressing anti-Asian hate crimes on campus. Like past SGA statements intended to support marginalized communities, it fell glaringly short. It failed to identify incidents of racism on campus and did not do its due diligence in recommending safety resources for students.

The demands outlined in the SGA resolution include “more attention be dedicated to the Bias Response Line,” “NYU Safe Ride [being] expanded” and, most notably, for Campus Safety to “immediately send out a universitywide announcement of attacks as soon as it is reported and [labeling] it as what it is: a hate crime.”

These demands indicate a mere acknowledgement of harm, rather than actual steps toward a safe campus, and they are nearly thoughtless.

SGA’s other recommendations responded to recent attacks on campus that were dismissed by NYU Campus Safety. To be clear, it’s a tragedy that students are unable to receive the bare minimum of transparency and response from NYU regarding their own physical safety. At the same time, mere acknowledgement hardly creates the illusion of safety as opposed to actual safety, especially coming from an institution that currently fails to make students feel safe.

Apparently, SGA’s resolution was geared toward visibility rather than immediate action. Why, then, did it fail to specify Campus Safety’s mishandling of reports and provide a platform to other students facing similar issues in reporting? Instead, the emphasis is placed on the following: “Too long have Asian individuals been dismissed in conversations of racism. We are more than your stereotype, we are more than your movie sidekicks. We belong here.”

Far from being a bold declaration, the quote undercuts what little substance SGA’s entire statement holds.

“We have heard enough advice about how we should stay in groups and be aware of your surroundings,” SGA writes in the same paragraph. “However, no amount of precaution could have prevented Michelle Go’s murder.”

Are we really meant to believe that representation issues in media are comparable to “the anti-Asian narrative in the COVID-19 pandemic,” which SGA themselves directly point to as a cause of anti-Asian violence?

A more useful statement would expand upon this “anti-Asian narrative,” summarizing the history of Asian exclusion and Yellow Peril in America and explaining its relevance to today’s xenophobia. Acknowledging these would be acknowledging a racism toward Asians that is more complex than just being called a “movie sidekick.” It would acknowledge systemic racism that NYU itself is culpable of. It’s easier instead to behave as if these are individual, isolated incidents, mere parts of a “recent uptick,” as the SGA statement puts it.

The recent statement is a step back from SGA’s March 17, 2021 statement condemning anti-Asian violence that, as vague as it was, did still refer to the actions by the Atlanta spa shooter as being rooted in racism and white supremacy.

This is not the first time SGA has fumbled the bag while attempting to support marginalized communities. A debacle in 2020 related to SGA’s statement on the murder of George Floyd resulted in the then-SGA chairperson resigning. Like they did with the recent statement, SGA advocated for marginal, ineffective solutions, not understanding NYU’s history of bad faith negotiation. We attend an institution that prefers the appearance of equity, inclusivity and safety rather than actually providing them, and will deny wrongdoing until the last possible moment.

Consider the email sent by NYU Campus Safety on Feb. 17, several days after Asian students were attacked on campus. At this point, their reports had been mishandled, so one student, AJ Sun, wrote an Instagram post about his attack: “Any Asian student walking on campus is still in danger of random, sporadic … hate-infused attacks.” Almost as if to mock Sun, Campus Safety’s email acknowledged the incidents, but sidestepped accusations of an unsafe campus. It instead revealed information that only NYU had access to, indicating all of the attacks were most likely carried out by the same person. Sun could not have known this however, and it’s insulting that NYU chose to respond in this way, determined to protect their own image over addressing their students’ trauma.

If SGA is interested in bringing about true change, they must move past lip service and resolutions advocating for acknowledgement and understanding, and move toward tangible services for students. This could include meaningful, comprehensive development and expansion of Safe Ride, greater and more consistent transparency in decision-making, the distribution of self-protective equipment to students such as personal alarms and whistles, and the encouragement and support of relationship-building between different NYU cultural organizations.

We don’t need yet another illusory token of safety. We need real people and resources coming together, organized by our administrators and SGA, to keep people truly safe on campus.