Opinion: Adults must prioritize the well-being and safety of children over social media’s profitability

The rise of social media platforms like YouTube, Instagram and TikTok has resulted in the exploitation of children. Parents, companies, schools and the government must act to protect children from this detrimental exposure to the internet. 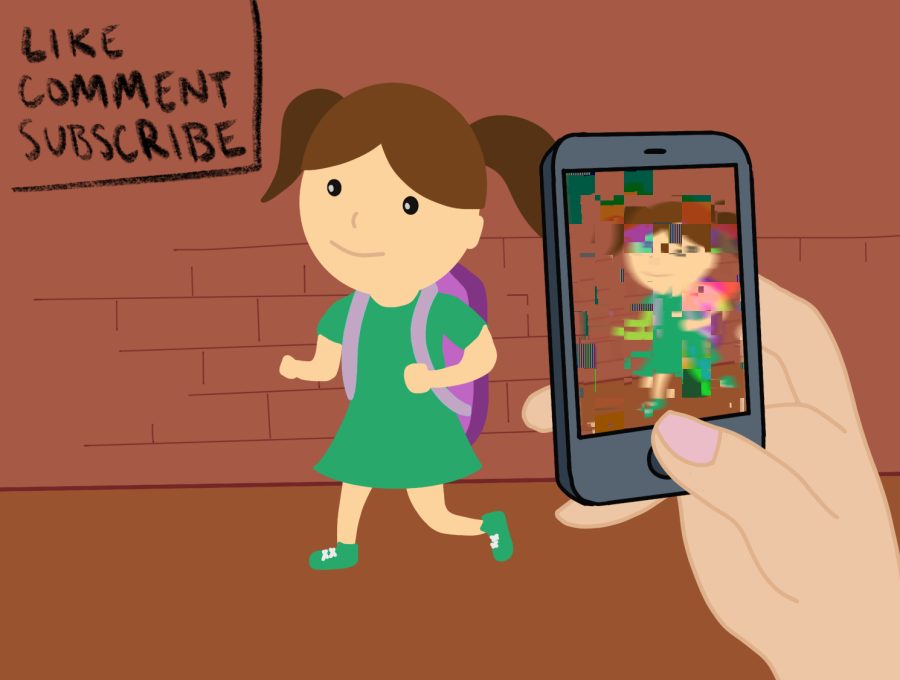 The rise of social media platforms has made children increasingly susceptible to unwanted attention and exploitation. (Staff Illustration by Manasa Gudavalli)

Children are an extremely vulnerable population. Easily impressionable and the targets of other people’s frustration, they are often unequipped to defend themselves. Some parents violate their children’s privacy by posting about their lives on the internet. Children deserve more respect and protection in a difficult and scary world.

Social media platforms, such as YouTube, have contributed to the exploitation of children. Family channels capitalize on children’s vulnerability by recording their responses to upsetting news or even lying to them to provoke a reaction. Parents leverage this emotional responsiveness for views and ultimately money. Parents should not take advantage of their children to contribute to their own income or fame, nor should they broadcast their children’s lives for millions of strangers online. This kind of exposure leaves children vulnerable to unwarranted criticism and sexualization. It blurs the line between public and private matters where parents are convinced that even the most confidential scenarios fall under the former because of its lucrative potential.

YouTube is not the only concerning platform — adults also use Instagram and TikTok to gain attention and wealth. There has been a growing trend of child influencers who are photographed or recorded playing games, unboxing toys and modeling clothes. Forcing kids behind a camera at an early age leaves little space for them to discover who they really are and creates a distorted image of what’s real and what isn’t. Children don’t understand the ramifications of having their lives being put on display, so their consent isn’t fully informed. Parents must recognize the harm of involving their children with social media and not encourage, or even demand, their participation.

Instagram and TikTok’s displaying and recommending of explicit content makes these sites more dangerous. Videos promoting unhealthy behaviors frequently become widespread because of these platforms’ algorithms, which account for views rather than potential consequences. This not only introduces children to mature topics before they may be ready, but often does so in a way that isn’t informative but overwhelming, factually wrong and discomforting.

Even when minors are not being shown adult content or capitalized on, social media still fosters an unhealthy environment. Spending hours staring at a screen and scrolling through a feed disconnects children from the real world and minimizes face-to-face interactions. Loneliness, depression and social anxiety may follow if minors don’t regularly communicate with their peers. There is also the narrative that social media connects people from around the world — a level of connectivity that, in reality, often results in children speaking with potential predators that risk their safety. To make matters worse, these apps are addictive.

Social media can cause isolation, but it positions itself as a source of community. Children feeling isolated may be convinced that the platforms exacerbating the problem will solve their dilemma. As they are already vulnerable, they are more at risk of becoming attached to these apps. This can lessen in-person engagement and consequently increase feelings of solitude.

Parents have to recognize these dangers, and they have the ultimate responsibility of not exploiting their children on the internet. However, social media corporations must also work to make their platforms more child-friendly. There are currently minimal and inefficient restrictions on the publishing of inappropriate videos and photos. This allows them not only to surge in popularity but to start trends that can span multiple platforms. Recently, there has finally been a widespread investigation on whether TikTok harms children, but this probe comes years after the app was created and has already negatively impacted minors.

Imposing regulations, conducting regular studies about the effects of social media on people and integrating lessons on internet safety and social media’s influence into curriculums are just a few positive steps. Having young adults and teens who’ve experienced the repercussions of social media speak to young children could provide insight into the reality of these sites, prevent similar mistakes from being made and promote well informed decisions. Most importantly, social media sites and opportunistic parents should be investigated for preying on and profiting off of children.

Ideally, children should not have access to these platforms in their current state, as they undeniably worsen children’s mental health. However, with how ingrained social media is in society, this may be unrealistic. So, the responsibility falls on adults to create an environment that is as safe as possible.

With kids growing up in a digital age, significant effort must be made to minimize the harm done by social media’s exponential growth. The leveraging and endangering of minors for the sake of acquisitive social media platforms cannot continue.