Amnesty International released a report last month concluding that Israel is guilty of perpetrating apartheid and other violations of international law against Palestinians. NYU’s Tel Aviv academic center and partnership with Tel Aviv University is nothing short of complacency and, by extension, complicity. 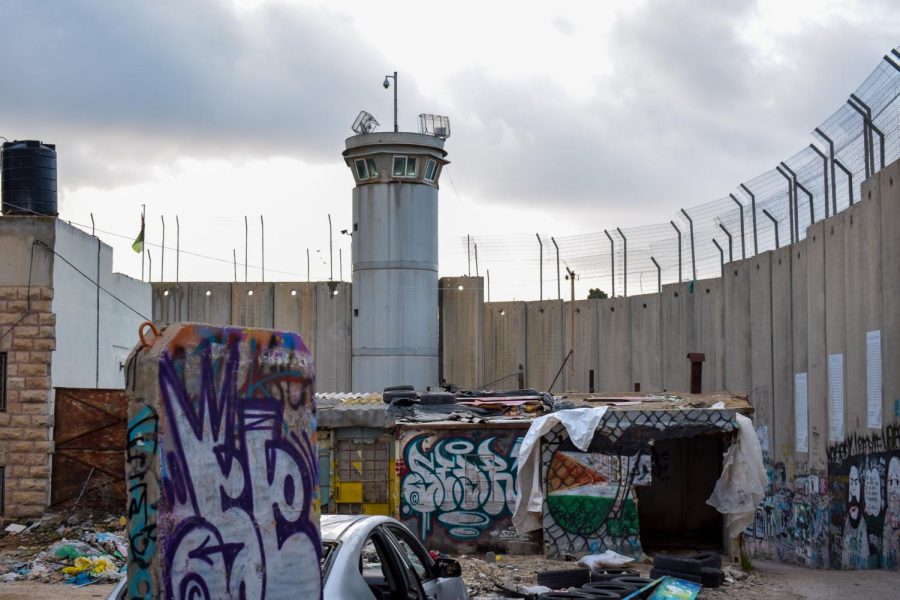 A guard tower on the Israeli West Bank barrier overlooks the city of Bethlehem, Palestine. The barrier, which divides Israel from the Occupied Palestinian Territory of the West Bank, was declared illegal by the International Court of Justice in 2004. (Staff Photo by Trace Miller)

NYU should shut down its Tel Aviv study abroad site. Maintaining an academic center in Israel signals complacency toward — and, thereby, complicity in — the apartheid, crimes against humanity and other violations of international law that the state of Israel perpetrates against Palestinians.

On Feb. 1, Amnesty International joined a U.N. special rapporteur, Human Rights Watch, and the Israeli human rights organizations Yesh Din and B’Tselem in concluding that the state of Israel is guilty of perpetrating these crimes.

This is not a groundbreaking revelation. Palestinians have been detailing the realities of Israeli apartheid and calling for its recognition as such for more than two decades, according to the Amnesty report. In November 2019, a coalition of Palestinian human rights organizations submitted a report to the U.N. Committee on the Elimination of Racial Discrimination concluding that Israel “has created and maintained an apartheid regime.”

More recently, in April 2021, the Palestinian Human Rights Organizations Council submitted an amicus brief to the CERD arguing that Israel’s violations of the U.N. International Convention on the Elimination of All Forms of Racial Discrimination must be analyzed in the context of the convention’s third article, which condemns apartheid and racial segregation and undertakes “to prevent, prohibit and eradicate all practices of this nature in territories under [the signatories’] jurisdiction.” Israel signed ICERD in 1966 and ratified it in 1979. Its infringement of ICERD’s third article — as well as multiple other articles — was reported with concern by the CERD in 2007, 2012 and 2020.
A system of violence and discrimination

The nature and specifics of Israel’s crimes against Palestinians is detailed in all these reports. To summarize these crimes is to pass judgment on which particulars of a totalizing — and arguably totalitarian — system of violence and discrimination are most worthy of mentioning. But summarize we must in order to condemn.

Jerusalem-based author and journalist Nathan Thrall reports in the “London Review of Books,” that “Israelis and Palestinians in the same territory … are tried in different courts, one military, one civilian, for the same crime committed on the same street.” Israel denies Palestinians the freedoms of expression, assembly, movement and habeas corpus.

The state of Israel is guilty of grave violations of Palestinians’ most basic human and civil rights: Palestinians are subjected to discrimination, violence, forced displacement and ethnic cleansing. Israel’s status as an apartheid state has been recognized by numerous national and international human rights organizations. Moreover, Israel reserves the right to ban activists involved in Jewish Voice for Peace or the Boycott, Divestment and Sanctions movement — and even to deny entry to foreigners who have called for a boycott of Israel or its settlements. These actions are illegal under international law.

NYU cannot, in good conscience, operate an academic center in an apartheid state while claiming in its non-discrimination and anti-harassment policy to be committed to creating an environment free of harassment and discrimination based on race, color, creed, religion, national origin, ethnicity or citizenship status.
Anti-apartheid action at the university

Taking action against apartheid within NYU is not unprecedented. The NYU Student Senators Council voted unanimously in 1985 to divest from corporations doing business with the state of South Africa “in recognition of the abhorrent discriminatory practices of the government of South Africa.” The Graduate Student Organizing Committee — the graduate student worker union at NYU — voted to join the BDS movement and called for the university to shut down its Tel Aviv campus in 2016.

NYU president Andrew Hamilton responded to the GSOC vote with a statement reading “a boycott of Israeli academics and institutions is contrary to our core principles of academic freedom, [and] antithetical to the free exchange of ideas.” Hamilton flatly stated that “divestment from Israeli-related investments is not under consideration.”

Two years later, in 2018, the NYU student government passed a resolution to divest from corporations “involved in the violation of Palestinian human rights,” including Caterpillar and General Electric, which still equip NYU with power, and Lockheed Martin, a corporate partner of the Tandon School of Engineering. Later that year, the Department of Social and Cultural Analysis pledged non-cooperation with NYU Tel Aviv until Israel grants academic freedom to all regardless of ancestry or political speech. Non-cooperation means the department neither sponsors faculty teaching at the Tel Aviv campus nor utilizes “any of its resources to facilitate faculty exchanges between the department and the [study abroad] program.”

In response to the student government vote, the university administration stated that it would not divest because “the endowment should not be used for making political statements.” Nevertheless, faculty and student groups have continued organizing against the Tel Aviv study away site. Faculty of Color for an Anti-Racist NYU pledged non-cooperation with NYU Tel Aviv in June 2021; their open letter was signed by hundreds of faculty, alumni, staff, and undergraduate and graduate students, as well as multiple student organizations. Just this past year, the NYU Review of Law & Social Change committed to BDS. And in mid-2020, GSOC condemned NYU’s decision to include the academic center in its list of Go Local sites and called for its closure.

GSOC called for the academic center’s closure in 2016, not only because of Israel’s discriminatory entry laws, but also because of NYU Tel Aviv’s partnership with Tel Aviv University, which is built atop the razed Palestinian village of Shaykh Muwannis. This partnership involves internships at TAU’s medical and scientific laboratories for NYU students as well as access to the university’s library. TAU is a well-regarded research university. Not well-reported, however, is the university’s role in collaborating with the Israel Defense Forces and perpetrating the state of Israel’s war crimes against Palestinians.

The Palestine Society at SOAS University of London published a report in February 2009 detailing TAU’s complicity in Israel’s invasions of Lebanon in 2006 and Gaza in 2008, the role of university institutes in writing Israel’s security policies and war tactics, and the involvement of university faculty and researchers in military research and development. According to the Palestine Society, TAU professor Asa Kasher wrote the IDF code of ethics justifying torture and assassination of soldiers and TAU researchers have called for the IDF to target civilians and civilian infrastructure rather than militants and military infrastructure in its wars against Hamas and Hezbollah.

The number of NYU faculty and student organizations and university institutions that have organized against the Tel Aviv academic center is inspiring and indicative. Thousands of members of the NYU community oppose their university’s presence in an apartheid state and its collaboration with an institution complicit in war crimes and other crimes against humanity.

The NYU administration, however, continues to reject petitions to boycott or shutter NYU Tel Aviv because the demands are “at odds with the tenets of academic freedom” and would suppress free speech, debate and exchange of ideas. Regrettably, our university president and spokespeople have failed to recognize that there neither is, nor can be, so-called academic freedom in a nation that denies the freedoms of expression, assembly, movement and habeas corpus to portions of its population because of their race, color, creed, religion, national origin, ethnicity or citizenship status.

Hamilton, like most liberal U.S. academics, has no qualms denouncing violence and violations of human rights when they come from further right on the political spectrum or are directed at white Europeans. However, he draws the line at denouncing this instance of Western imperialist violence against people of color. The words “occupation in Palestine” seemingly fill him with nothing close to dread or sorrow — otherwise he might denounce Israeli apartheid.

The state of Israel is guilty of apartheid, crimes against humanity and other violations of international law. TAU is complicit in war crimes. And yet, NYU maintains an academic center in Israel — thereby discriminating against Palestinians and supporters of BDS — in partnership with TAU, tacitly endorsing the violence of the nation’s colonial project. Such a situation begs the question: Would NYU have maintained a campus in South Africa in the 1980s as its students protested it?

Enough is enough. To NYU senior leadership and the board of trustees, I say, bring the university in line with its own ideals and policies. End the university’s implicit endorsement of apartheid and war crimes. Shut down the Tel Aviv academic center.