Opinion: Is Joe Rogan really worth it, Spotify?

Following Joe Rogan’s controversial episode about the COVID-19 vaccination, Spotify should remove his podcast from its platform. 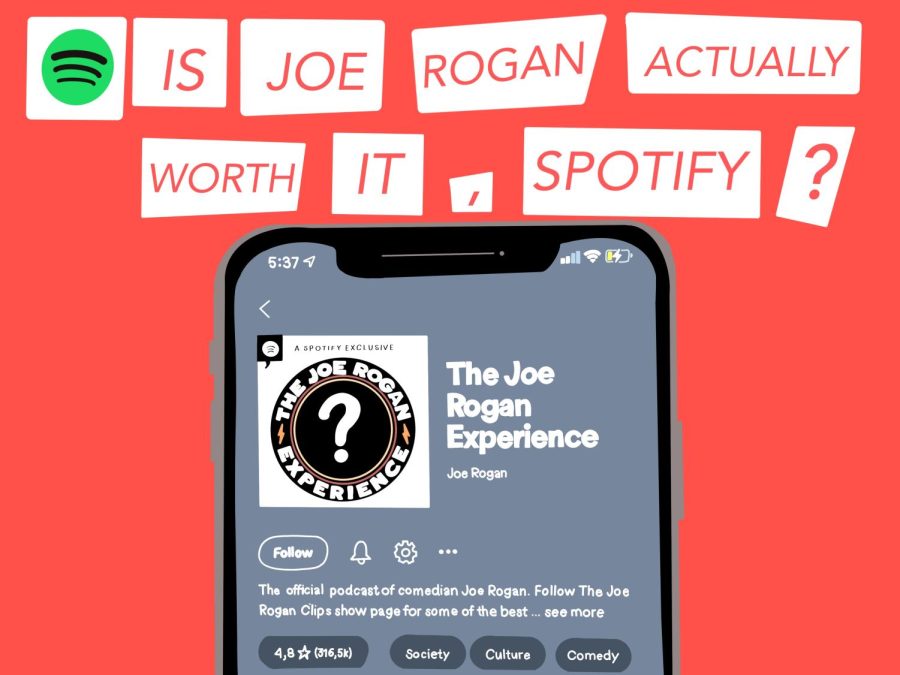 “The Joe Rogan Experience” is a podcast that debuted in December 2009, hosted by Joe Rogan, comedian and UFC color commentator. (Staff Illustration by Camila Ceballos)

Let’s imagine you are the cofounder and CEO of one of the largest music and podcast streaming platforms in the world. You sign a more than $100 million deal with a podcaster. By the end of 2021, it’s revealed he’s the biggest podcaster on your platform. On Dec. 31, he airs an episode featuring an infectious disease researcher who is also a vaccine skeptic and instigator of several COVID-19 hoaxes. Alarmed by the “false and societally harmful assertions,” 270 doctors, academics and health workers sign an open letter to the streaming platform urging it to “establish a clear and public policy to moderate misinformation.” To top it off, renowned artists Neil Young and Joni Mitchell pull their music from your platform in response to the dangerous misinformation being spread.

What do you do?

Such is the reality of Spotify cofounder and CEO Daniel Ek and famed podcaster Joe Rogan. Rogan’s infamous Dec. 31 guest was Robert Malone, a doctor who states on his website that he is “concerned about how the [mRNA] technology is being developed and implemented.” In the episode, not only did both Rogan and Malone make claims that were widely disproven — they also provided COVID-19 vaccine skeptics with narrative fuel. One of their outrageous claims compared the COVID-19 vaccine to Nazi medical trials in an atrocius display of Holocaust revisionism.

Despite his anti-COVID vaccination sentiments, Malone has claimed to be the inventor of the mRNA technology for vaccines. However, it has been proven that while he did do early research on the subject, the development of the vaccine and study is largely credited to the extended work of other scientists.

After the death of more than 950,000 Americans due to COVID-19, it’s very worrisome that someone who is using medical credentials to undermine vaccine technology was seen as credible. It’s even more worrisome that Rogan, who is aware of the reach of his platform, is platforming and enabling this doctor.

Rogan is unvaccinated and has repeatedly claimed that young and healthy people don’t need to get vaccinated. Rogan chose to give importance to a vaccine and COVID-19 skeptic through his platform. The Centers for Disease Control and Prevention Director Rochelle Walensky offered evidence that unvaccinated people are 14 times more likely to die from the disease than those vaccinated with two doses. This speaks to Rogan’s blatant disregard for a disease that kills a significant number of Americans every day — as well as disregard for the work of millions of health workers and researchers who have spent every day of the last two years battling the virus.

Malone’s comments likely reinforce anti-vaxxers’ case against vaccine mandates and vaccines in general. The open letter to Spotify by doctors, academics and healthcare workers conveys this anxiety, stating, “Dr. Malone’s interview has reached many tens of millions of listeners vulnerable to predatory medical misinformation … This is not only a scientific or medical concern; it is a sociological issue of devastating proportions, and Spotify is responsible for allowing this activity to thrive on its platform.”

Ek responded to the controversy surrounding “The Joe Rogan Experience” episode by denouncing censorship. After receiving the open letter signed by the people who have experienced the pandemic firsthand in their line of work, Ek issued a statement saying that he was not going to censor any of the creators on Spotify: “And I want to make one point very clear — I do not believe that silencing Joe is the answer. We should have clear lines around content and take action when they are crossed, but canceling voices is a slippery slope.”

Instead, he will implement a content warning in each podcast that mentions or speaks about COVID-19 to alert listeners. This feature will direct listeners to up-to-date COVID-19 information curated by doctors and specialists.

Ek’s solution is the equivalent of putting a bandaid on a stab wound. He is sending a message: Spotify’s exclusive deal with Rogan — the most prominent podcaster in the world — is worth the risk of misinformation that could mislead millions of people. While this situation certainly raises important questions about free speech, I believe that Spotify should apply its deciding powers as a private corporation and remove Rogan’s podcast and the dangerously misleading information it promotes.