Despite NYU’s commitment to student health, mental health struggles are slipping under the radar. COVID-related dining restrictions curtailing eating spaces are negatively impacting the wellbeing of students, especially those who have complex relationships with food. 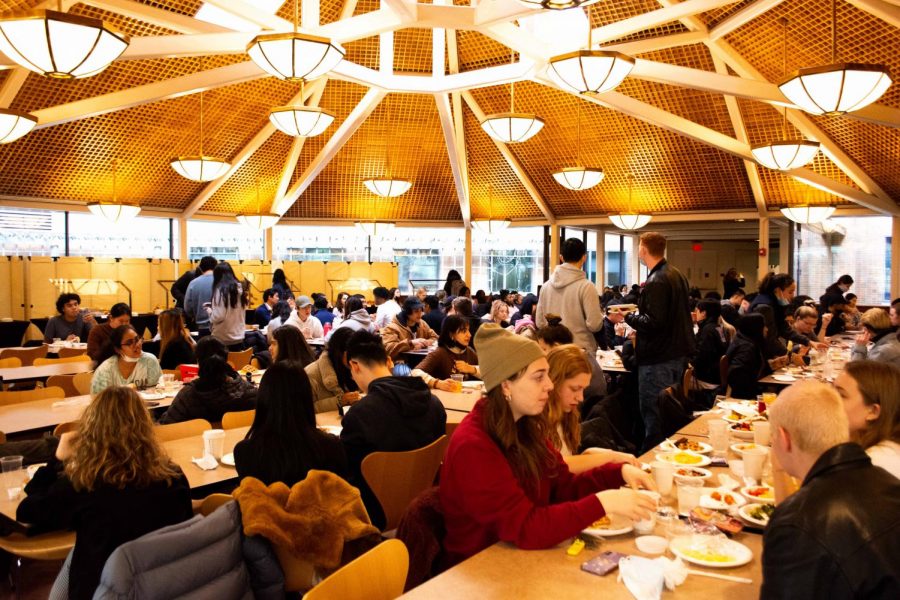 Palladium dining hall is located on the third floor of Palladium Hall is one of the most popular NYU dining locations. Various dining restrictions since COVID-19 have made student dining more difficult, causing more harm than good. (Staff Photo by Jake Capriotti)

While NYU has placed a major emphasis on COVID-19 safety policies, the administration has paid significantly less attention to how new regulations impact students’ mental health. Mental health plays a crucial role in maintaining one’s overall health. It is urgent that the university consider how dining restrictions are impacting students’ wellbeing, especially that of students who struggle with eating disorders.

This semester, NYU only has 13 designated eating spaces — four on the Brooklyn campus and the other nine on the Washington Square campus.

A few of these areas, such as the Global Center for Academic and Spiritual Life locations, are 15-minute Quick Stop Spaces. During a typical lunch hour, it can be difficult to find a spot to eat. Oftentimes, the amount of available seats is less than the students and professors looking for one. As winter approaches, the number of alternative eating locations — like Washington Square park — are dwindling.

For students struggling with or recovering from eating disorders, the limitations of designated dining spaces can bring additional stress and discomfort. CAS senior Olivia Ottaviano said that Quick Stop Spaces have been a big source of anxiety — they tend to be full, with multiple students waiting for a spot. Even if she does get a seat, she feels pressured to finish her food faster to make room for other students.

Other places such as the lowest level of Bobst Library, which were primarily study spaces before the pandemic, are now some of the only locations where eating is allowed. However, when she attempted to eat in these spaces, Ottaviano found students continuing to use the space to study or nap.

“Sometimes I’ll have my lunch and I’ll be like, ‘Well, there’s nowhere for me to eat so I guess I just won’t eat right now,’ which fuels my restriction in so many ways,” said Ottaviano.

Like other students affected by the lack of designated eating spaces, Ottaviano now feels discouraged from bringing her food to campus or from spending time in NYU buildings.

Ottaviano works as an RA in Palladium Hall, where most of her residents are living on-campus for the first time after staying home for remote classes last year. Because of social distancing and lack of seats in the dining halls, she frequently receives emails from residents asking about alternative spaces to eat in. She suggests that NYU should allow students to eat in residence lounges in order to alleviate the strain of the limitations.

Like Ottaviano, CAS junior Savannah Mota has had difficulty maintaining a regular meal schedule as a result of dining restrictions. She used to eat three meals a day at school, and even without a meal plan, she would bring food from home to eat on campus.

“I take Adderall and it can be really hard for me to maintain a healthy appetite and eat as much as I should be eating,” said Mota. “That has undoubtedly been made exponentially harder by NYU’s refusal to give students adequate places to eat.”

NYU used to have spaces where you could study, eat and socialize all at once. Now it feels like you have to pick and choose what you can do on campus. Maintaining a regular meal schedule can already feel overwhelming. The added stress of not knowing where to eat or feeling like you have to do so as quickly as possible can make students want to go home rather than stay on campus to study.

“I’ve had so much trouble keeping up with a study schedule because it’s so hard to balance study and eating time since I live 30 minutes away from campus,” Mota said.

Last year, CAS sophomore Ana Roudebush lived in the Third Avenue North residence hall, which did not have an open dining hall due to COVID-19 restrictions. She and her four roommates were all struggling with food-related mental health issues, and going to the dining hall at Palladium became a difficult task.

“Eating is one of those things that now that I’m recovered [from an eating disorder], I realize that it has to structure my day. When I was going through the thick of it, it definitely wasn’t something I wanted to do on my own accord, so having to walk that distance, even to Palladium, to get food was tough.” Roudebush said.

When Roudebush joined NYU’s Student Government Assembly, one of her main goals was ensuring that situations like her own didn’t occur again. Roudebush is a senator at-large representing mental health, eating disorders/disordered eating, and student athletes. She is working on a letter of support for NYU leadership to open more eating spaces on campus. As part of the Health and Wellness Committee, she’s received feedback from students on how NYU’s actions have affected their eating and wellbeing, and knows that both need to be protected. According to Roudebush, the administration has emphasized in their meetings with SGA that they plan to open more spaces. By the start of next semester, we may see restrictions loosen.

In the meantime, NYU needs to take accountability for the negative impacts of dining restrictions on student mental health and provide additional resources to students struggling with eating disorders.