181 Mercer Street should not distract from NYU’s failed record on climate. 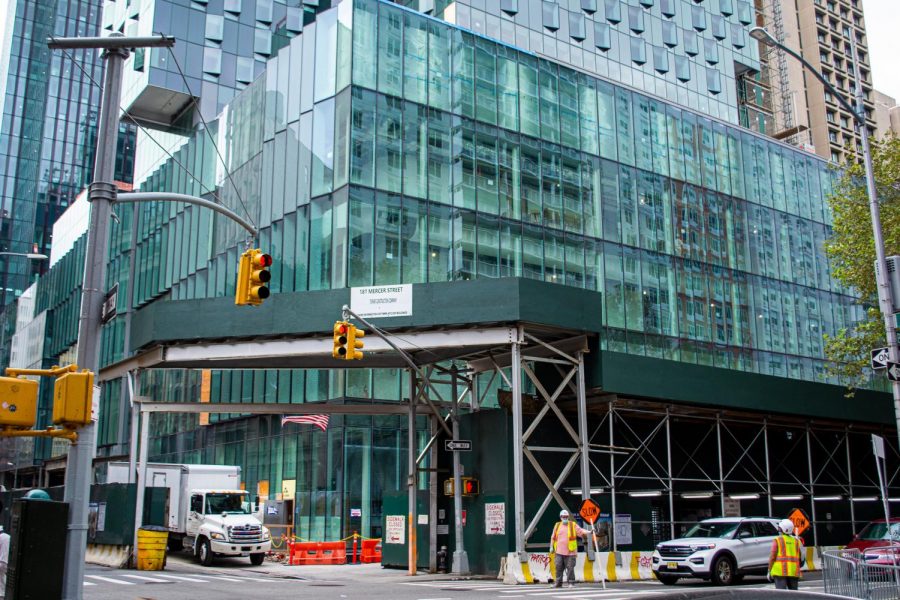 181 Mercer St., located between Bleecker and West Houston Streets, will be NYU's new multi-use building. NYU brands the building as sustainable, but the university’s board still includes members who have ties to oil and gas companies. (Staff Photo by Manasa Gudavalli)

Green is the new millennial pink. It’s popular to care about the environment. People are considered trendy when they carry cute sustainably-made water bottles and shop at resale stores. It’s cool to buy reused fashion or wear clothes made from recycled waste — even my mom has Sketchers made from recycled plastic. Corporations are taking advantage of an increased interest in sustainability through greenwashing: branding their products as sustainable while engaging in activities that are destructive to the climate. Similarly, NYU is practicing greenwashing through the building and branding of 181 Mercer Street. NYU is engaging in sustainable building design while remaining complicit in the fossil fuel industry, deploying the guise of environmentalism to restore its reputation.

Once built, the 181 Mercer Street Project will be the largest campus building, including classrooms, gyms, a theater and housing. NYU has pledged to reduce greenhouse gas emissions and minimize water usage. Publicizing this new building as being constructed with the environment in mind is an attempt to distract from NYU’s complicity in the climate crisis. It is hypocritical that NYU claims to be environmentally friendly while trustees like Joseph Steinberg, Khaldoon Khalifa Al Mubarak and William Berkley remain closely tied to oil and gas companies. Additionally, trustee Larry Fink is the CEO of BlackRock, a hedge fund with some of the most significant fossil fuel holdings in the world. No amount of sustainable buildings or environmental pandering will erase NYU’s abysmal record on climate.

Corporate environmental consciousness has become a mere status symbol. NYU’s new building should not be used to hide NYU’s impact on climate and its affiliation with fossil fuel giants.

Additionally, previous WSN reporting has shown how NYU still does business with fossil fuel companies. NYU refused the demands of campus activists to divest from fossil fuel companies, stating that fossil fuel companies would not be excluded from their $3.5 billion endowment for the foreseeable future. In fact, NYU invested $139 million from its endowment into fossil fuels, propping up an industry that enacts immense harm to the environment. Merely creating a sustainable building should not create a false reputation of NYU’s commitment to the climate.

Some argue that at least NYU is doing something for the environment, and that this is a first step to a more sustainable university. While many of these environmental changes are laudable, such as the bird-safe glass, it is performative to create a sustainable building while supporting fossil fuel interests through their Board of Trustees. We have to stop giving companies and large organizations, like NYU, any leeway, and start holding them accountable for their actions. Greenwashing is not a substitute for actual climate action. While the Board of Trustees is filled with fossil fuel magnates and their endowment is polluted with oil and gas money, NYU’s support of the environment and sustainability is hollow and cynical.